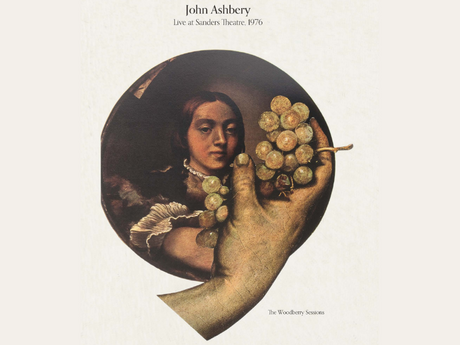 On May 16, 1976, John Ashbery gave a reading at Sanders Theatre, Harvard University. The date is significant because his book of poems, Self-Portrait in a Convex Mirror (1975) had recently been awarded the Pulitzer Prize, National Book Award, and National Book Critics Circle Award. Being awarded three literary prizes of this magnitude was unprecedented, which Ashbery knew, as it signaled his elevation from a cult figure beloved by a small group to a widely recognized public figure. Among friends, he self-mockingly compared himself to the racehorse Secretariat, which had won the American Triple Crown in 1973, but in public Ashbery tended to be self-effacing. At no point during the reading does he mention the prizes. At the beginning of his reading, he tells the audience that he will read for an hour, beginning with new poems and will work his way back, and then proceeds to do exactly as he announces. Ashbery’s quiet refusal to make much of the attention the prizes brought him was inseparable from his devotion to the possibilities of poetry and experimentation.

Ashbery read 20 poems, 14 of which were new and would appear in his next book, Houseboat Days (1977). He read four poems from Self-Portrait in a Convex Mirror, and two poems from The Double Dream of Spring (1970), ending with “Farm Implements and Rutabagas in a Landscape,” a sestina populated by the cartoon character Popeye and, in Ashbery’s telling, the Sea Hag, Wimpy, Swee’pea, and Olive. The span covered is interesting for the changes that took place in Ashbery’s work during this period and for his ever-widening range of allusions, references, and inspirations-from comic strips he first saw as a child to little-known works of art. He became more relaxed in his use of language. Double Dream of Spring marks the beginning of Ashbery’s masterful use of the American vernacular, which he often mixed with other discourses, such as the colorfully formal language found in English Restoration tragedies or the heightened speech used in movies. What Ashbery shared with New York School poets, many of whom he met while he was a student at Harvard (Frank O’Hara and Kenneth Koch) was a love of structure and how its restrictions could be used to generate something unexpected and fresh, such as a sestina, whose six end words in Ashbery’s poem are: thunder, apartment, country, pleasant, scratched, spinach.

Along with his interest in poetic structures was his love of music, from late 19th, early 20th century composers such as Claude Debussy and Ferrucio Busoni to Kaikhosru Shapurji Sorabji and Eliot Carter, all of whom are known for the intricacy of their compositions. Although Ashbery mentions none of these things, I can assure the listener that he could draw upon them and much else when he was writing his poems. He was fond of quoting Walter Pater’s dictum, “All art aspires to the condition of music.” In his love of music and of figures of speech, Ashbery wanted to bring together the abstract and the concrete, as in the poem, “The Couple in the Next Room,” which opens: “She liked the blue drapes. They made a star / At the angle. A boy in leather moved in.”

He gives a glimpse into his thinking in two instances during the reading. The first time is when he describes how the poem, “Pyrography” came to be written. His description is hilarious, self-effacing, impish, and confident – and well worth pondering. The second time is when he talks about the poem, “Daffy Duck in Hollywood,” and links it to seeing a program of Daffy Duck cartoons at a movie theater and his reading of John Milton’s Paradise Lost. Beyond this anecdote, he tells us the meaning of a number of obscure French words and phrases he uses in the poem.

Listening to Ashbery casually telling the audience about the poem, I was reminded once again of his genius of putting unlikely things together, of his remarkable ability to make incommensurable connections seem like they had been waiting for someone to see them because they had been there all along. Nothing feels forced in Ashbery’s capacious poems. In his poems, connecting one word to another seems as natural as dew on grass. At the same time, when he has Daffy complaining about “That mean old cartoonist,” Ashbery offers a satirical vision of the author’s omnipotence. This is one of the things that set him apart from his contemporaries, those who believe in the “I” and those announced the author was dead. This questioning of the author takes many forms. In “Mixed Feelings,” which was included in Self-Portrait in a Convex Mirror, the figures in the “Photograph” of the “girls lounging around / An old fighter bomber, circa 1942 vintage” get annoyed with the author: “Aw nerts, / One of them might say, this guy’s too much for me.” It is hard not to sense the delight Ashbery had when the poem spoke back to him; in his solitariness he felt an undeniable companionship with a wide range of figures as well as considered the nature of the “I” or author from an entirely different place than his contemporaries. The poem, “Wet Casements,” begins: “The concept is interesting: to see, as though reflected / In streaming windowpanes, the look of others through / Their own eyes.” Ashbery was never interested in finding his own voice. Rather, he was interested in all the voices he had heard, read, and encountered in his life, from movies to intimate moments to something overheard in the street or read in a newspaper. What sense could you make of that cacophony? What kind of order could you give it? As I imagine he might have said to himself, the concept of trying to get all of this into a poem is interesting. In this reading–recorded more than forty years ago–Ashbery sounds like, as the introducer proposes–he is giving us the poetry of the future.


Reprinted from the liner notes of JOHN ASHBERY LIVE AT SANDERS THEATRE, 1976 with the permission of the publisher.

Reprinted from the liner notes of JOHN ASHBERY LIVE AT SANDERS THEATRE, 1976 with the permission of the publisher.

John Ashbery Live at Sanders Theatre, 1976 is forty-seven minutes of poetry from Houseboat Days, Self-Portrait in a Convex Mirror, and The Double Dream of Spring.

The record includes a 16-page liner notes booklet with original essays by Douglas Crase, Dara Barrois/Dixon, and John Yau, along with archival material such as photographs of Ashbery’s annotated manuscripts and original artwork by R. B. Kitaj, Larry Rivers, and Ashbery himself.