Home > Features > In Their Own Words > Aaron Coleman on “On Disembodiment”

Aaron Coleman on “On Disembodiment” 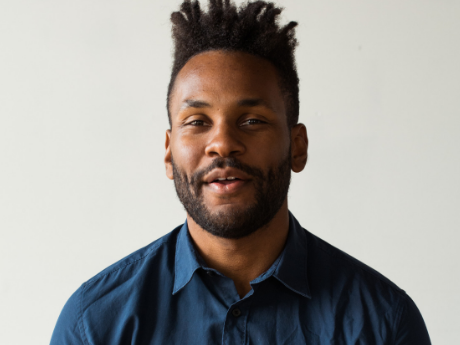 I begin to count what I do to myself each morning:

The naked black man breathes heavily on screen, but
says nothing. His body's expression feels voyageless and
working myself I cannot see his face as the two

smiling naked white women climb determined all over him,
make a boat and anchor of his body. I am touching
myself but I don't know what else I'm doing. I do know

two kinds of annihilation. You know, you want to love—make—
make yourself love a delicious god whose crown is a throne,
its emptiness, no thorns. The exotic is our horizon. Its power

a place for longing, so violent. I want a home. I want a body. More
of my own—I don't want to be a surface possessed anymore. Let me
be one breath needling inside. I know something of what we name

pain, but what part of it, me, precisely, is doing the dying?

"On Disembodiment" from Threat Come Close, © 2018 by Aaron Coleman. Appears with the permission of Four Way Books. All rights reserved.

A few years ago, this question popped into my mind: am I exotic to myself? I mean, in my own eyes, how do I deal with the fact that my young black male body has always had to navigate the fear and desire of a white U.S. American gaze. What is the physical and psychosocial toll that comes with being seen to 'fit the description' (whether that be criminal, sexual, or otherwise) since my early teenage years?

Negotiating that reality has influenced my relationship to anger, to power, to self-control and external systems of control, but also, inevitably, to desire, and the ways you begin to notice how you're seen as you grow into yourself.

"On Disembodiment" is a strange mirror in the way that pornography is a strange mirror that frames so much of U.S. American desire—there are these secret relationships that so many men have to pornography, and in one way or another I know it has a serious and unexamined impact on our culture. This poem obsesses over what is going on with all the racial exoticism and commodified sexual desire that takes place in pornography, and how that affects the speaker's relationship to his own body, and to the bodies of others.

Even a quick scan of the titles of online porn videos is a catalogue of the psychosexual and racial baggage ever-present in the underbelly of U.S. American culture. When I wrote this poem into a pseudo-sonnet form (the split-apart lines of a rhyming couplet begin and end the poem, functioning as the frame of fourteen lines), I was thinking about the twist or resolution in a Shakespearean sonnet's final couplet and how to expand a concise and poignant moment, a moment of conclusion, into an entire sonnet that exists on the underbelly of 'love.' I'm not so much trying to describe lust—I'm trying to feel and examine our relationship to lust and desire, how all of it, in our culture, is shot through with race and intimacy (or a lack thereof), and very messy power dynamics. The poem still makes me uncomfortable, and I want to believe that's a good, useful thing.

I'm grateful that the sentence "I am touching/myself and I don't know what else I'm doing." revealed itself as I wrote this. That's where, for me, the poem's landscape broadens beyond the scene described, and begins to get at the human, and the masculine, relationship to touch—whether that be touching ourselves or others, sexually in self-pleasure, or not. With touch, there's always so much going on there, always these unknown transformations and repercussions.

The title "On Disembodiment" is one of several poems in Threat Come Close that takes up a faux-academic position via the word "On" and then explores the following word with vivid human situations ("On Forgiveness," "On Surrender," and "On Acquiescence" are some of the others in the book). The topic of the body permeates much of the poetry of our current cultural moment, so in addition to my interest in that zeitgeist, I'm curious about what happens in situations when we feel we're outside of our own body, when the culture tries to force us outside of ourselves (e.g. the white gaze-side of "double consciousness") or to just flat out give up on our bodies. From that vantage point, how do we look at what the body is, what the body wants, and what the body does?