Anna Gurton-Wachter on “Poem from Hypnosis” 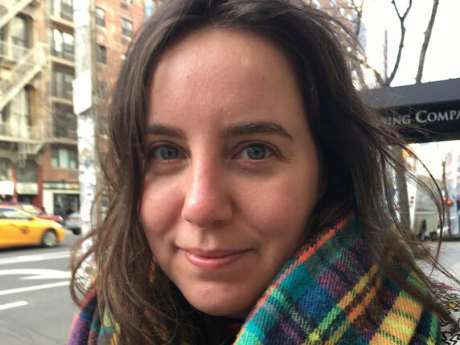 that which is sick or well in me

separates, I crowned myself

yes, you get it, I had to crown myself open

so open the listener’s whole attention seeps back

pigeons overtake the part of the house

where the roof caved in

other animals coo now from the basement

ever-present the listener and I sequestered and I

in my woman treasure futile form

on the floor holding an electric saw

up over my head, a song emanates from it

power off, in fact you could tell I held nothing

in the vicinity of suggestion, laceration

the failure of writing implied, I realized

to be female and genderless nonmaterial throat

I had to hold the paper in my hand drooling

rub it against my face

with my eyes closed

I thought I saw you

in every word a formula

and seeing you live this way

has made a big impression on me

each room that I enter

seen through red glass on the factory floor

the trick is to just keep going

forget how we made it all up

though still I have nothing to write with

no implement or tool, I petted an animal

that was not in every sense there either

wrestled with a bear one moment, then a rat

in this process I learned how to speak the terrain

but I didn’t mind the lapse

being older than the world, thus tasked

I call out to all of you: please hold this appetite

can you hold this bull’s eye

hold this while I measure, let me at least measure

what space if any we have left


From Utopia Pipe Dream Memory (Ugly Duckling Presse, 2019). All rights reserved. Reprinted with the permission of the author.

On “Poem from Hypnosis”

This is the first poem, or proem, in my first bookUtopia Pipe Dream Memory. It encapsulates many of the themes that appear throughout the book: imagined intimacies, invocations, conversations with the world of material objects, hallucinations and visions, animal worlds colliding, the carving out and claiming of space. Like much of the rest of the book it also functions as an homage to my influences, the artists who have shaped my understanding of these themes.

This poem, dedicated to the filmmaker Peggy Ahwesh, was written while thinking through an experience I had as an actor in Ahwesh’s film The Ape of Nature. For this project each actor was hypnotized before being filmed—a nod to, and meditation on, Werner Herzog’s Heart of Glass, which followed the same procedure. On the first day of filming the hypnotist arrived and began working with the other actors on a scene that I was not in. I was to be just an observer, and I sat nearby with a notebook of lined paper in my hands, curious what this unusual specialist would do to hypnotize my fellow actors. As I listened, I found I had started swaying my body back and forth, rubbing the notebook pages and smiling joyously. It was as though I could feel in the blank page, the unwritten words, the entire concept of possibility, of before. I’m a bit suggestible generally but I was also in an environment that Ahwesh had created where I felt that her vision for the narrative of the film remained open as we moved through making it, and that is a really joyful thing to experience. I like thinking about all of the variables that go into making a work of art happen. Sometimes the motions we go through look recognizable, integratable into regular life like measuring things or handling construction tools, but what we are building is play and unreality. There is also a relationship between the hypnotized person, drooling and blissed out, and the creative mind that needs to shut off judgement and editorial tasks until later.

So for me, this poem returns me to the site of openness, a feeling that is older than the material world could be. Yet it returns often to an idea of architecture, of structure, of what would it mean to let animals take over part of your house? To acquiesce to them rather than view them as pests to be gotten rid of? To relinquish traditional attitudes towards property and authorship?

The poem also introduces the reader to a few stylistic moves I do throughout the book, namely piling together a group of nouns to see what hybrid forms I can devise and how much weight they can hold. Utopia Pipe Dream Memory. Origin Earth Admixture. Earthquake Shatterer Poetics King. My sister remarked recently that we are all clinging to nouns, to the stable material thing-ness of them, in times when it is harder to understand how anyone makes anything, says anything, when so much pushes us towards not speaking. As the nouns pile up they become slippery. This thing-ness of language that is so attractive can also shift and make visible the gesture of reaching for words in the face of the unutterable.