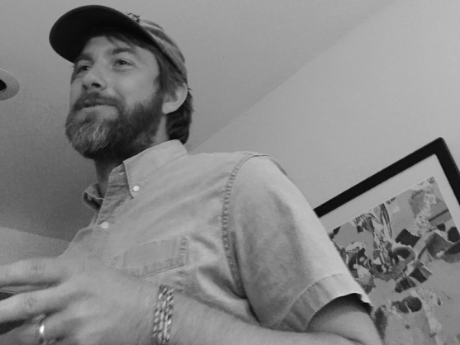 but her picture is
everywhere,
and her owner,
my neighbor, paces
the living room talking
to the carpet’s
tessellations,
but not to Kiko,
who is missing.
My grandmother

spoke to patterns too,
refused to look from
the museum’s marble tiles
to its sculptures.
She said, My niece
writes wonderful
poems, but she
had no niece
and hardly had me
in mind. She said,

From Huge Cloudy (Octopus Books, 2019) . Reprinted with the permisison of the author. All rights reserved.

On “Kiko is Missing”

I live in a neighborhood of assiduous flyer removers. Any sort of guerrilla advertising has little chance of remaining posted for long—“We Buy Houses-Cash,” “Yard Work Wanted,” “Free Stuff”—all swiftly torn down.

Missing pet posters provide the exception to this rule. Just the other week I spotted an ominous two act play: a picture of a small missing dog on one laminated (lamented?) sign, another poster reading “Warning Pet Owners: Coyote Spotted in Area,” directly beneath it. It was one of these such neighborhood dramas that provided the impulse for “Kiko is Missing.”

From this initial image, the poem moves through association: from an imagined neighbor and her imagined rug to my grandmother’s familiar posture and the corridors of a museum I had recently visited. From invented dialogue to a real snippet of overheard conversation (was it on the radio, in a café, from a friend?). I’m interested in poems that move forward like Theseus’s ship, which changes as it sails, where associations accrue through incremental leaps of logic. The poem makes its own sense, could end anywhere, but here feels right. This particular poem ended with Wikipedia, the entry for the Ship of Theseus, in fact. I followed a hyperlink. My grandfather’s axe. I never held it; it might not have existed. But I know it now.

Though little beyond the title “happened” of this poem in a real sense, the poem catalogues correspondences that feel natural enough, true enough. So much so that it felt important for me to a resolution for Kiko in “The Decisive Moment,” the long, final poem in Huge Cloudy. Spoiler alert: the cat’s next life.