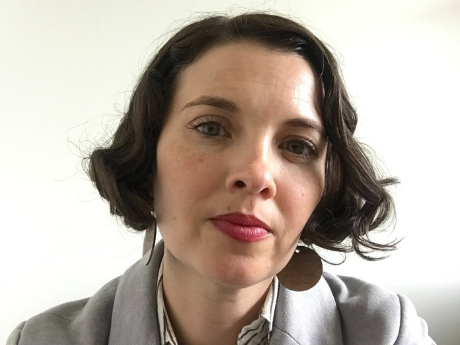 Daughter of a Tree Farm (an excerpt)

For a long time, I did not know better. For a long time, I did not know anything else. The daughter of a tree farm, I could not see the road. When someone said: you are what I need, I let the weight be the mass of me. I’d leave the trees and my arms would be full of scrapes that I never felt happening. I moved deeper into their very straight lines, into the branches. Their order brushed against my shoulders as I ran. And it was all sap and itch; I was marked. And when you said: you. Well, what did I know? I listened. And the thing about the farm is that it’s quiet.

Slate stones and horizons that curve. The circumstances under which, and through which, we grow. Readers may consider that which bleeds and heals, elaborate. But the question of going away roused the most passionate interest. Due, no doubt, to the disciples and opponents watching the will [and the windy gestures] of the going away from the hillside. All of us, a few short appendices, points, and persons.

My age is not in doubt. I had not yet ruined all I had to ruin to convince myself. In the wood rings, there is an age of belief. I could run into the pines and meet a stranger there. The most free thing was still a full moon and a sky-lit gravel road. Halter and bit, I was yet bound by a strategic reticence.

I shall hardly cut my family. It is unknown whether I fulfilled my promise. The most difficult thing is the will to fix the moment from devotion. I am continually wondering whether I am doing it properly. And whether tomorrow, pardon.


From Be the thing of memory (Tolsun Books, 2021). Reprinted with the permission of the author. All rights reserved.

On “Daughter of a Tree Farm”

I am an imperfectionist. I think this would surprise many people, but I have no patience for making things perfectly. I am all fragments and cracks and gaps and silences and ink stains and cat fur. I think this is part of why I love erasures, but do them imperfectly. I can never seem to just erase. I have to add to and remake and riff on and draw out. Cut, paste, add, flip, reimagine.

“Daughter of a Tree Farm” is the opening sequence of poems in Be the thing of memory, which is composed of four sequences of poems, all based on found text or imperfectly erased erasures. I always enjoy working with a source text as a way to get outside my own mind, and three of the four sequences in the book are based specifically on feminist sources with a focus on excavating overlooked or sublimated or forgotten voices and perspectives. For this poem, which was the first I wrote for the book, I started with the autobiography of Sophia Tolstoy, a woman much-less famous than her authorial husband, but with no less of a story to tell. For weeks I sat with her book and a pencil in hand, crossing out words and phrases as though decoding a secret message. But, when it came time to then type and compose these erasures, I found myself inherently drawn to speak to them. The result became a kind of dialogue, where the poem moves back and forth between my own words and thoughts and the observations and language of Sophia, both of us inhabiting the labor and the hush of the rural. It’s not a pure erasure, but a hybrid form, which I realize is what comes instinctually to me. I’m not good with rules, but love order and structure when I can play architect. And this is the governing sensibility throughout the book, both inclusive and intimate. A space for listening and a space to unravel the knotted threads that hold us together.

David Woo on “The Leaf Blower among the Swimming Pool Lights”