Chia-Lun Chang on “The Government Makes Me” 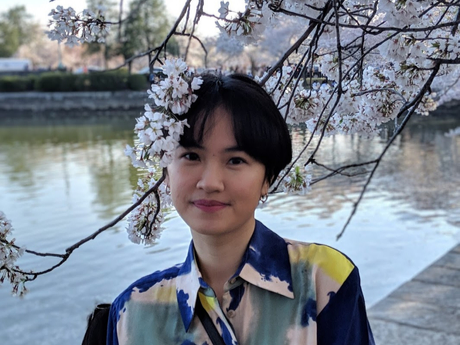 The Government Makes Me

lie if I want a visa. They paint me to
a bunch of aloe. Locked fluid inside
my skin. But I’ve become a cactus
by adjusting to dryness. Others suggest
to mimic a rose. That’d make it easier to
be picked up. No one appreciates aloe,
humans squeeze, swallow or
apply on skin in summer kitchens
only. Click the form of venus flytrap
to sign up as an immobile predator.
None of the above dare to grow roots
until the government announces
that all of the thorns build a fence
preventing connections from
another side. Thus, my answer oozes
from the vera of polygraph is nimble.


Reprinted with the permission of the author.

On “The Government Makes Me”

First, I have to clarify that I have never lied to the U.S government when answering questions. At least, I hereby declare that the details are true and correct to the best of my knowledge and belief.

The first time I came to the United States from Taiwan, I was a junior in university. As one of many students who had joined the program, Summer Work and Travel USA, I was told by the agency that there are standard answers to provide when encountering questions from US administration. One question was, are you intent to stay in the United States after the program? For a hypothetical question like that, I have many possible answers, such as, what if I find my true love or a time machine? What if I join a secret society? Apocalypse? However, I wasn’t supposed to bring these possible answers to the table. My answer to “are you intent on staying?” might have truthfully been “I don’t know, but unlikely” had to clearly be “No.” In fact, the warning from the agency had a severe impact on me. Every day I woke up, I was in a state of panic, confusing the date, fearing I was overstaying. After the program, according to plan, I went back home. I didn’t travel back to the States until a few years later. Still now, whenever I meet with the administration, I often feel as though I’m fabricating my answers, even when I am telling the truth. Or more precisely, what is the correct answer to a hypothetical question?

I have no strong affection for plants. They’re beautiful and peaceful; they are gentle objects that complement the street, parks, or restaurants where they are found. People don’t usually need to pay a fee to observe them and they’re everywhere. More importantly, no one hates plants. But one day when I walked around the city I saw that someone was growing thistles and plants with thorns in order to create a natural fence for their property. I realized, the most passive object can also be cultivated into a weapon.

It was the variety of questions that I encountered with the administration which began planting the seed for this poem. I had wanted to be as harmless, likable, and passive as a plant; however by going through the process, I've transformed into a thorn in order to protect myself, and have become a part of the fence, just as the government planned. Besides, if I planted the seed of fear, anxiety and doubt inside my mind, it’d probably grow up as something sharp, too. In my poem “The Government Makes Me” I collect thorned plants as a metaphor for immigrant visa process. There is the aloe plant, cactus, the rose, and the Venus flytrap. In the poem, aloe represents the desire to be functional; cactus signifies the natural adjustment to difficult environments; the rose, for me, means a marriage visa; and the Venus Flytrap, is a symbol of the business world, where everyone becomes a predator. The poem was finished at another side in the first draft and the voice tended to be passive. While I was editing, I found that the difference between aloe and aloe vera is their taxonomy. Vera means “faith” in Russian, and in the Latin origin coincides with verus, means verity. I added the last line as a response to the poem itself.

I was alone on my last trip to Cambodia. The plan was to do research in Siem Reap, mainly in the Angkor Archaeological Park. I couldn’t help but notice the ways that the tourism industrial complex was thriving, especially on Pub Street where I would sometimes eat in the evenings after visiting temple sites. Almost every Cambodian I had come into contact with had asked me, Why are you traveling alone? Where is your family? They were concerned for me.

The constraint and condition of possibility for Diurne is “a line each hour of waking / a poem each day of making.” The book is made up of incremental sentences, wages, and fragments of time—my attempts at capturing the dailiness of consciousness over the course of a month. T