Claire Donato on “The Second Body” 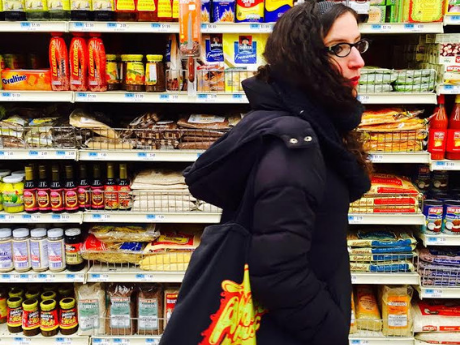 From The Second Body (Poor Claudia, 2016). All rights reserved. Reprinted with the permission of the author.

2. My first impulse is to close read the poem.

3. "If a person is struck by a body"—wherein struck denotes hitting forcibly—"is that painful?"—wherein painful denotes the source of pain, distress or trouble, a word denoting the malfunction of a body, a machine. "She's not the first girl who has gotten herself into trouble," the dictionary posits. Here, trouble refers to the condition of a pregnant, unmarried woman: an adult human animal fetus carrier.

4. As I sd to my friend, because we are always texting: I am writing an essay about a poem.

6. Struck implies that which unexpectedly comes into the mind. "If a person is struck by a body, is that painful?" In this interrogative sentence, the body becomes (via the verb struck) an idea, a thought-form, or a book: a collection of bound pages, a map of everything that has happened to it.

7. When I took birth control, I possessed regular periods, an even skin tone, and a violent inner demon. "Drink," the demon said, referring to a bottle filled with bleach. The birth control was packaged in a little plastic tray containing 28 circular slots containing 28 circular pills: one for each day in a 28-day circle of weeks. These pills prevented pregnancy; they did not prevent the second body. Companionless, I walked to Top Notch Art Supply and bought #11 X-Acto™ Knife replacements. I desired to draw blood, to write on my arm's flesh. (Amina Cain: "Write about the arm when the whole body is being abused.") Birth control also provided me with a condition known as dermatographism, literally "writing on the skin." (Skin and flesh are not the same, I write, then sever the skin on my toe, exposing flesh and blood.) Write on the skin and the skin not only bleeds, but also swells—opens up! This second body—this skin-writing, this acute suffering—"[is] induced or worsened by periods of anxiety, physical stress, tight or abrasive clothing, watches, glasses, heat, cold, or anything" (Wikipedia).

11. Now I am listening to Kristin Hayter's D E F A C E D. It is a piece of music created from data gleaned via "an infamous photo of pop superstar Rihanna." In her essay prefacing D E F A C E D, Hayter scrupulously excavates the politics of this photograph. A survivor of domestic violence, she writes about the ways "ubiquitous media representation dehumanizes and plasticizes, as domestic violence dehumanizes and reduces." The resulting piece, comprised solely of Hayter's voice, is playing on repeat in the background of this sentence, thereby invoking "traditional Russian folk wedding songs — essentially musical weeping in which the women of the village mourn the loss of the bride to her husband."

12. In the middle of this essay, the second body arrives, marking me possessed.

13. In my spare time, I read (past and present tense) books about the couple-form, a container I desire to burn. It is through this container that patriarchy wraps its hands around that which courses through these lines: settle down! settle down! So there is a second body in this, and there is a second second body that is the product of this, and there is an oppressive body comprised of two—a third body—that "stands in for desire itself, after enshrined, funneled, and reduced to a single object by patriarchy" (Clémence X. Clementine and associates from the Infinite Venom Girl Gang, "Against the Couple-Form"). How to unravel it?

14. In this sentence, I take possession between my palms and set it ablaze. Heterosexuality burns. Jealousy burns. Monogamy burns. The bed is on fire. The bath towels are aflame. So too are my palms a hot glowing second body shooting in and out of exhaust. A black cat crosses the frame. Then another. Now I am standing in the center of a circle lined with pain. Never will I wed: this sentence is accompanied by the coloratura mezzo-soprano whose voice suffers sudden malfunctions, glitches serving as units of time vanquishing abuses. As the fire rages, this sentence renders cultural constructions of love that bring forth the Second Body Obsolete. When the marital bower goes up in flames, all that is left are the rings.

15. "As long as we are alive," the Tumblr blog says, "we can expect painful experiences." In fact, "The Second Body" is a poem that performs textual substitutions on questions purportedly posed by the Buddha with regard to the second arrow, a concept referring to the ways we react to perceived emotions. What is controllable, the Tumblr blog says, is the second arrow's reactive sufferings superimposed atop the first that arrive in the form of anger, condemnation, criticism, judgment. The Tumblr blog cites a Buddhist monk citing the Buddha. The first arrow arrives: I am writing this. Second, I watch as this sentence is superimposed with shame: once again, I have composed a numbered list to expunge myself! Then: the second arrow becomes the second body. Finally, I trace my finger across the adjective controllable.

16. I am the second body. Is the second arrow angry? I watch as its reactive sufferings swell into this assemblage. A corporeal form—one's own or another's—is not an optional superimposition. Believe survivors, Hayter's laptop's sticker says.

17. If this writing is my second body, then it is a non-optional outer layer that forms atop the surface of something hot—a feeling, for example, a skin that bears no language but is invoked, in part, by the act of recollecting and typing, typing and recollecting, making discoveries and charting connections between abuses while maintaining an opacity that keeps anxiety at bay. The second body cannot be moved or lost. It cannot be unlocked. Nor will it ever reveal itself.