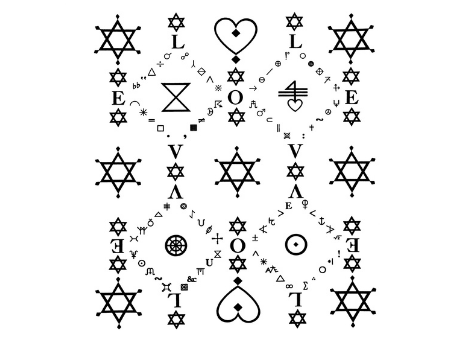 Traces of the almost choreographic moves of fingers across a typewriter’s keys. A nude body in a sequence of positions, forming the letters of the alphabet. The names of rivers floating down a river. An experiment in synesthesia: writing on music staffs that produces the sound of silence, the written words becoming visible only after a brushstroke’s caress. Overlays of texts printed deliberately off-register, producing visual noise and literal indeterminacy. Compositions using the odds and ends in a series of Letraset fonts. A newspaper written in unreadable yet highly expressive glyphs.

The works that result from these methods may very well represent the “tension of word-things in space-time” that the Brazilian Noigandres group saw as unique to concrete poetry in 1958, but they are less concerned with using “graphic space as structural agent” than with liberating letters from words, and words from the conventions that dictate how they should function in ordinary language and in traditional literary texts. If such works definitely involve a substantial degree of “play-activity” and a desire to bring something into the world that is “a reality in itself and not a poem about something or other,” as Eugen Gomringer would have it in his foundational manifesto of 1954, “From Line to Constellation,” they are often far from simple objects that are “memorable and can imprint [themselves] upon the mind as a picture.” Nor can they be as easily understood as “signs in airports and traffic signs,” like the concrete poems that Gomringer envisioned in his other manifestos. Mary Ellen Solt—a pivotal figure for the movement and a bridge between Europe and the United States given her involvement as an editor, a translator, and a poet herself—is fully cognizant of the ambiguity of the rubric in the introduction to her groundbreaking volume Concrete Poetry: A World View, published in 1968: “Despite the confusion in terminology, though, there is a fundamental requirement which the various kinds of concrete poetry meet: concentration upon the physical material from which the poem or text is made. Emotions and ideas are not the physical materials of poetry.”

Here we present works by fifty women who may not have identified themselves as concrete poets. In the first place, the label could have seemed narrow given the myriad approaches to the word-image question, and not precise enough to mean any one thing. Furthermore, some of these women worked on the periphery of the main concrete-poetry circuits, although they shared similar concerns. Many of them, perhaps out of a drive to experiment or a sense of irreverence, worked in other modes as well, shunning easy categorization. However, it is clear that, for the most part, the women whose work you will encounter in this volume often chose to disengage themselves from the task of making prescriptive pronouncements. Instead, they focused on multiplying the possibilities opened up by attending to language’s materiality, and on  challenging the very constructs that support the  binaries divorcing a poem’s physical properties from its more subjective ones.