Diana Marie Delgado on “The Sea Is Farther Than Thought” 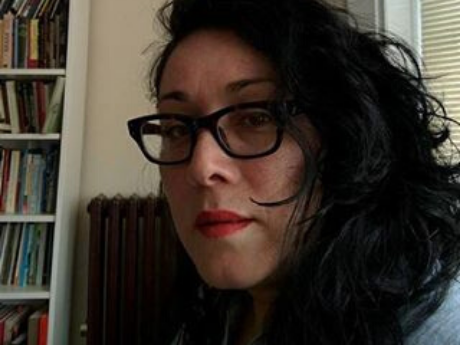 The Sea Is Farther Than Thought

In church, the boys have so much
light, plants grow towards them.
My aunt handed me an organdy
fan and said: Hold this if you’re frightened
or want to lose yourself—the devil
can dance like a goddamn dream.

There are three things on Earth
to point to: the sun, the moon, and
the television. I can locate one of these.
My brother walked into a garage
with a needle taped to a battery
and emerged with his stomach

tattooed. I don’t think I’ll touch a face
like that again. Across the street, wetbacks
sleep five to a room and sweep
and water their dirt, while children send
canoes without oars down the Hudson.
Let me explain Westward Expansion:

Snow unfolded over a wagon train
of nine and nothing without wings survived.
The sea is farther than thought. He answered
the door holding a rag to his neck
and we kissed on the service porch
near a pitbull that’d just won a fight.

Sometimes my father whittles
for my mother in front of a bonfire, the vein
searching his thigh, Corinthian-blue.
To be honest, I called because there was snow
in my glove, not because I missed you.
If the original tunnel of the body

is the mouth, I’ve never had one.
As a girl I kept suede horses
and a hairbrush inside a blond toy-box.
One day my face will refuse to turn away.
Some people like poison.
I kneeled every time I opened it.


From Tracing the Horse (BOA Editions, 2019). All rights reserved. Reprinted with the permission of the author.

On “The Sea Is Farther Than Thought”

I arrange shards; “The Sea Is Farther Than Thought” is the result of such an arrangement. Even after it was published in the Indiana Review: Latino/a Summer Edition, I continued to rearrange and revise until the final version was published in my first collection, Tracing the Horse (BOA Editions, 2019). I don’t necessarily recommend constant tinkering but I found a kindred spirit in Lucie Brock-Broido’s poem, “I Wish You Love” (A Hunger), and a kindred process, too.

I’m grateful to Timothy Donnelly for introducing me to that poem. “I Wish You Love” consists of eleven stanzas and astounds with a boundlessness of content and range that is kept in check by an excerpted song recorded by Marlene Dietrich. It ends with the following standout last line: “Now Dietrich’s dead; we turn left here.” What stuck with me beyond the poem’s genius was its genesis: that the poem was an assembly of assorted lines— pieces if you will— that Lucie did not know what to do with.

My process with many of my poems, including, “The Sea Is Farther Than Thought” is to comb my freewrites for lines that ripple below the surface; intimating the sinew and muscularity of something trying to bore through. Once I’ve culled my lines, I arrange the lines by asking myself, “How does this line feel in the overall constellation of lines?” “Is there an identity to this line? “Do I get a sense that there’s an energy to this line that’s similar to the energy in a song?”

I think of this poem as a bardo of sorts, where ideas and speakers come together in a place of taboo, where simple lines are not extinguished but amplified by the courage of other lines. Why bring this up? Because although it’s the lynchpin, form comes last to me. I could write for a million years, but only through crafting, the shaving and deletion of extraneous noises, can I see into the distance and proceed.

Throughout, my intention is that my writing pose a question rather than an answer, and in this challenge, keep the reader engaged in ritual, mystery, and learning rather than experiencing the limiting response generated through an insistent: I have something to tell you. Because the truth is I don’t. The poem does.