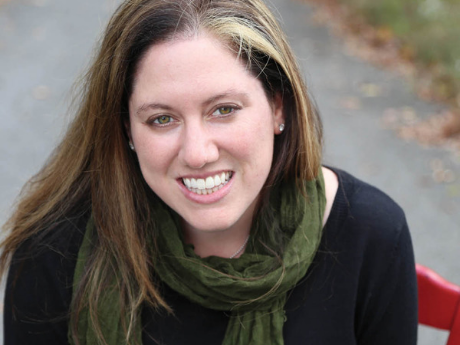 At the airport the conveyor bears small yachts shaped like luggage
into the distance, and I am headed, when they let me pass

through the x-ray arch, toward home. There is a distance
sometimes greater than this between us, since you are in

another state—gaseous, solid, liquid, light—and I admit
I am often absent lately from whatever is happening

in a given room. Portatus. Having been carried from one place
to another, I will be delayed in this terminal in Akron, Ohio

for the longest dusk, but I do not yet know this. I spend hours
trying to puzzle out the black script running a boy's entire right arm.

He is crew-cut Army, sits in the attached row across from me,
feet up on a digicam rucksack. It's probably bible, that tattoo,

John or Luke, maybe Timothy, and the boy is beautiful, the boy
is totally unmarred but for his tattoo. When he flips his cell phone

open & shut, open & shut, I want to reach out to stroke his
wheat-colored stubble, ask him what his black ink means.

Portare, to bear. I still have many things to say to you,
but you cannot bear them now. Portare bellum: to carry the war.

Before Thanksgiving, we will pull in to the Sunoco off I-78 in Jersey,
where one veteran in hunting camo carries another like a bride

over a threshold. They will be laughing when they chime
through the door of the Quik-Mart. Every footstep and palm-press.

Every machine propelling us forward. Wrecked amen of beverage cases,
clicking gas pumps. Selah hallelujah. And I will carry you away

beyond Babylon, a passage, portare, to bear from one place to another,
on one's arms, head, or back. Our bodies bear witness (to the light

to the darkness), bear fruit (lucky lucky), bear the sins of many,
bear whatever it is into the distance. When our neighbor dies—

the pastor's wife—he calls over, asks me to go through her clothes,
take them home. She would want you to have them, he says.

For we brought nothing into this world, and it is certain we can carry
nothing out (except our stories). In this story, the door jingles hello.

The man being carried turns his head toward me,
over the shoulder of the man carrying him, and he is laughing.

The word I thought of was mirth: and Sarah laughed
to herself, and God asked Abraham, Why did Sarah laugh?

Porto. I bring my son inside by the hand, after them.
He has to pee. The bathroom is outside. There is no key,

says the cashier, and I see the laughing man balanced on a stool
at the counter, which is when I notice that he has no legs.

His buddy peruses the beef jerky aisle, and when he turns,
one side of his face is scarred and pitted. The bathroom

is fetid. My small son touches the graffitied tiles,
the toilet seat, asks about the condom machine

bolted to the wall, and I stumble through some answer
about adult things, about protection. He does not ask

about the soldier with no legs. Portant. They carry.
Outside, their pickup is filled with hunting gear,

camo tarps, a wheelchair, a USMC sticker. Portavi.
I have carried my son and I will not bear another one.

My neighbor's name was Ruth, and before she died I was often
tempted to ask her to pray for me, as if Jesus could cure

our secondary infertility. That story of him touching the bier.
Then the bearers stood still. And he said, "Young man, get up."

And he told the mother not to weep, and her only son sat up,
began to speak. Portamus. You & I, we carry the burden together

of the not-exactly-barren. We were fruitful and now un-,
and some days we are so old that the grey in your hair

gleams like treasure, and others we are so young I get carded
for beer at the Food Lion. In this story, I put off visiting

the neighbor's to go through Ruth's clothes, and instead
get her back issues of Good Housekeeping from her husband.

In my story, your face is turned toward me, and we are laughing
at the ancient recipes, and in my story everyone is marked

Daily, we bear the weight of more weight forward;
portare is hardly ever said of a light load.

From Copia (BOA, 2014). Reprinted with the permission of the author.

How do we approach the seemingly unspeakable through language? As a writer, there are things that are easier for me to write about, and feelings or experiences that are so difficult to articulate that they become long stretches of silence.

In 2009, my husband and I started trying to have a second child. We had gotten pregnant almost immediately in 2006 with our son, and we had no reason to think the second time around would be different, until it was. We tried for over three years to have another child, through drugs, and interventions, and doctors and doctors and doctors. Secondary infertility is, to some extent, invisible. Since we already had a child, no one assumed we were struggling. I talked to almost no one about the painful injections, the hours of driving (and then flying out of state) to see specialists, the heartbreak of multiple failed attempts at baby-making, and even the adoption that fell through after we met the baby in the NICU. All of these experiences fell squarely into the 'unexplained' camp. What do we do with the inexplicable?

When you study a language as a kid, it stays with you, even if you fail to use it regularly. I started taking Latin in 6th grade, where we began with basic verbs, and kept at it through 12th grade, translating Virgil and Catullus. The verb porto always stuck with me, as it means three seemingly different things: I bring, I bear, and I carry.

I was on the road a lot in 2010 and 2011, doing readings from my book Ideal Cities, spending much time in airports. It seemed like everywhere I flew or drove, I'd see soldiers with their digicam uniforms and backpacks. If not for my road encounters with soldiers, our wars in Iraq and Afghanistan would have been invisible to me, as they were to so many Americans who didn't have family serving in the armed forces. Interestingly, the digicam camo pattern the army used starting in 2004 was scrapped in 2012, as it turned out the grey-green pixelated design stood out in practically every environment in which it was used. What does it mean to be foiled in our attempts at self-preservation? How do we fail mightily, as a society, to protect each other from harm?

My neighbor during those years was a pastor at one of our local mega-churches. He and I often had long biblical discussions while we were outside gardening at the same time. Sometimes, I talked to his wife instead, who lost her battle with stomach cancer while I was writing this poem, which took me a full year to finish, because: silence. My knowledge of New Testament is pretty limited, but I was interested in verses that used the words bring, bear, or carry. This is how John 16:12, Acts 7:43, 1 Timothy 6:7, and Luke 7:14 ended up in my poem, alongside Genesis 18:12.

There are burdens we bear silently and individually, and others we try to bear collectively. Each year in the fall, Jews celebrate Rosh Hashanah, the Jewish New Year. And each year, I am struck by the biblical texts we read as a community on this holiday—Sarah giving birth to Isaac after many years of infertility, which echoes the story of Hannah giving birth to Samuel, also after many years of childlessness. In experiencing the particular visceral grief of infertility, I found myself more attuned to the suffering of others—the unspeakable pain many of us carry, for whatever reason, that simmers just below the surface.

"Porto, Portare, Portavi, Portatus" appears as the last poem in my latest book, Copia, just out from BOA Editions. When I started working on this book, I was obsessed with images of abandoned houses and buildings. I was in Detroit on assignment for VQR in 2010, exploring some of these spaces, and went to the Detroit Institute of Arts, where there's an entire court with a fresco cycle by Diego Rivera ("Detroit Industry"). One of the central images of the fresco is the image of a baby growing in the bulb of a plant, with these women—these two fertility figures—connected to the baby. At that moment, looking at the image of that baby, it dawned on me that these empty spaces—these buildings—were in some way a metaphor writ large for my body: functional but vacate, beautiful in their dissolution. Sometimes our obsessions are smarter than we are. Infertility is a primal kind of (unfulfilled) desire that dissembled me entirely, emotionally and physically. The happy ending of my story—our story—is that we adopted our second son, Levi, in January of 2013.