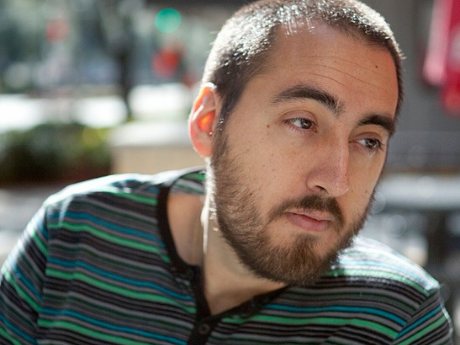 I feel as though I am a wall in a house. I have a duty
as that wall. Support. Lately

I've been thinking of the distance between us. Sometimes
it is a mile and sometimes we are wrapped
in each other. Time can be
a distance too.
The rooms


in my apartment are becoming smaller. I know
the paces and the damage that's accrued. The walls
are too familiar. Outside people are getting furious


in a political way. I thought we were on the same side. I thought our foodstuffs
would remain affordable to the general public. I thought
the sound bites would eventually
end, but instead they are amplified.


I feel as though one strong breath could topple me.


I worry about wrong turns. I worry about these delicate muscles
that move within us to keep us alive. Another
emotional collapse. If I am the wall of a house


then I have a duty to remain erect.
There are a lot of museums in my city. I assure people
it is cosmopolitan. But this city has a breath and it is poisonous
to me. I feel compromised. You are so many streets
away from me but I am erect. Hundreds of people live
in my apartment complex alone.


shuts off during extreme moments of pain or confusion. Petits morts. I was never


the wall. My friend said there was a pattern of doves on my wall, but he knew
that was not true. There were no doves. There was no voice.

When I was younger I was really into horror movies. Back then I read a lot of articles in Fangoria in order to find different horror movies to seek out, and there was a write up about a rerelease of Lucio Fulci's The Beyond. I found it at this local hole in the wall video store (Video Village, long since closed) where tapes were fifty cents to rent for five days. I hated it – the plot was, to me, almost incomprehensible, people mumbling bad dubs at each other for ten minutes in a quiet daze occasionally interrupted by an extended sequence of murder and death, and then at the end reality just sort of evaporates. I wanted closure, I was seventeen!

Years later, though, I read an interview with Fulci in which he said that for many of his movies he was not interested in a pure narrative, that linear storytelling wasn't important to him. He was a follower of Antonin Artaud's Theater of Cruelty. To Artaud narrative was an oppressive act, and made audiences complacent, and to break away from the comfort linear narrative creates he would insert unrelated and jarring imagery or scenes in his plays. Artaud, and Fulci, believed this form of imagistic fragmentation would create a heightened connection to the text in the audience, since they constantly had to redefine what they were observing. After reading the interview I felt like I understood Fulci's motives a little more, and I really like The Beyond now, although Fulci's not exactly the untouchable genius a lot of people make him out to be.

In a lot of my poems I try to enact a similar approach to narrative (by which I also mean linearity in thought, not necessarily a story). I'm not as interested in the image shifts being violent in the way that Artaud and Fulci often were, but I do want to bring readers closer to the poem by inserting scenes and images that create a particular emotional state. In this poem the argument is a fairly simple one of desire for a person who is at a distance from the speaker. The separation of the two lovers creates a cascade of potential scenes and images that could make the distance permanent. The intent is to replicate the stress and fear of being alone and hopeless—food becoming inedible, political anger, an apartment getting ever smaller, etc. Later images —doves, highways, orgasms—unrelated to the thought process of "I miss my lover" specifically, should imply a relaxation, a calming down. If the reader experiences this sequence of emotions as a result of the image and scene breakage then they've experienced the narrative of the poem in a way that they could not have if it was told as a story. They'd have the "facts", yes, and could pass a multiple choice test on the event of the poem, but emotion is paramount, to me.