Hannah Gamble's “Your Invitation to a Modest Breakfast” 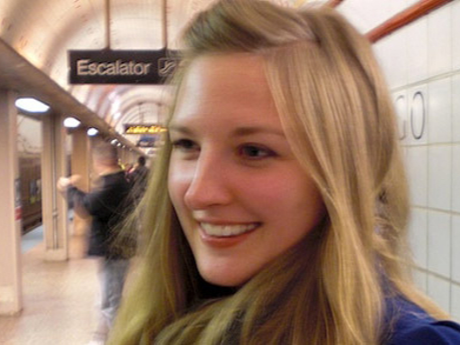 Your Invitation to a Modest Breakfast

It's too cold to smoke outside, but if you come over,
I'll keep my hands to myself, or won't I.
I would like to tell you about the wall eaten up

by the climbing plant—it was so beautiful.
Various things have been happening to me,
all of them sexual. The man on the bus

took off his pants so I could see him better.
Another man said, "Ignore him darlin'.
Just sit on my lap." But I'm not one of those

Listen. Come over: the cold has already eaten
the summer. I need another pair of ears:
from the kitchen I can't tell if I'm hearing wind chimes

or some gray woman with failing arms
dropping a pan full of onions and potatoes.
This morning I need four hands—

two to wash the greens, one to lift a teakettle,
one to pour the milk. This morning, one little mouth
will not do. We could play a game

where we crouch on the tiles, two yellow dogs
drinking coffee from bowls. We could play a game
where we let the breakfast burn.

Outside there's a world where every love scene
begins with a man in a doorway;
he walks over to the woman and says "Open your mouth."

Poem reprinted from Your Invitation to a Modest Breakfast (Fence Books, 2012). Reprinted with the permission of the author. All Rights Reserved.

On "Your Invitation to a Modest Breakfast"

When I was in high school men started hitting on me and I wasn't sure what to do. Most of my life I'd been trying to be a less assertive presence in the world (the general opinion of my elders and peers was that I needed to exercise humility, be less bossy, be less of a know-it-all, start fewer fights). I wanted to be a good daughter/ sister/ Sunday school student/ girl-scout/ slumber party guest and I suffered embarrassment and even grief whenever anyone indicated to me that I'd been, for example, a combative goody-goody attention-hog. I wanted to be liked, so I wanted to be nice, and my attempts to be pleasant and passive carried over into my responses to various sexual advances. Most of the time I just pretended to not understand what was going on (or I really was confused, like when a coworker from Hungry Howie's Pizza called me while I was watching The Incredibles with my family and asked what I was wearing and then got angry when I said "corduroys"). Other times I just said "No, thank you!" or and/ or excused myself.

When I was nineteen (and still very chaste) I spent a year in France, where my inability to deal directly with sexually-charged interactions proved to be of even more consequence. Once I got the hang of speaking French, my university classes weren't so hard anymore and then there was nothing to do besides go out dancing with my friends. On the dance floors of southern France several things happened to me (most of which I have since come to find funny, though also not funny): I was swatted repeatedly (and rhythmically!) by the denim-clad erection of the large, afro-d man in a green raincoat, one man limboed under my skirt, one man grabbed and then sort of twisted my breasts as if he was polishing or drying the undersides of two stemless wine glasses, one man smacked his hand up to cup my crotch and held it there, and another man picked me up to grind my crotch on his hip and repeated pulled me back by the arm when I tried to get away from him; when I made one final, and slightly panicked attempt to get away, he grabbed me by the shoulders and head butted me, right there in the middle of my favorite Panjabi MC song.

The lesson that I learned there was that even passive resistance could garner me pain. I was really at a loss, then, when, a couple years later on a San Francisco bus, a man proudly changed his shirt in the middle of the aisle (pausing to speak to me, the only other passenger, for a while in between shirts) and then sat down next to me and began rubbing my thigh. It was, I felt, certainly out of the question for me to move his hand. But because of the head butting incident in France it now also felt out of the question to even move away from him. I just sat there, letting him rub my leg (much to the subsequent dismay, and even anger, of my then-boyfriend who had been of the opinion that he was dating a strong woman who could take care of herself).

I guess that really only addresses about half of what's going on in this poem, though. This poem is also a seduction poem, though one in which the initial mode of seduction is to talk about how the speaker has experienced unasked-for advances and in which the speaker indicates (and then un-indicates) that her guest will be safe from any of her sexual advances while in her company.

My hope is that readers find this poem friendly and ominous. I find the world in general to be both of those things, and I can't say I mind it.