Home > Features > In Their Own Words > Jessica Q. Stark on “Explanatory note” 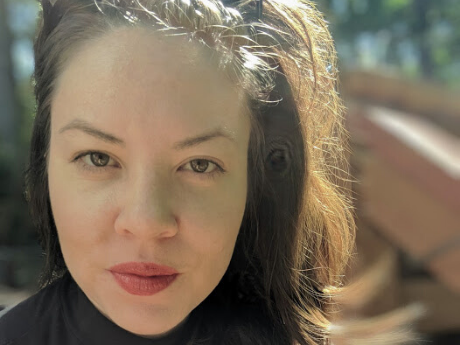 Poems about saline and unsolicited
advice

Poems about ghosts and the unhinged
latch

Poems about sunsank and missing
persons

Poems about the crack and mass
hysteria

Poems about misinformation and
contaminated waters

Poems about the wood before the stage

Poems about animals playing other
animals without explanatory notes

Poems about stealing land and then
putting your name on tombstones

Not-poems about song about poems

Songs about poems about song


From Savage Pageant (Birds LLC, 2020). Reprinted with the permission of the author and publisher.

“Explanatory note” was one of the last additions to Savage Pageant, a hybrid poetry book that centers (in part) on a defunct zoo called Jungleland. In the book, I juxtapose poems about my first pregnancy and my own terror of bringing a child into this world with the chronology of California landownership, Hollywood gossip and concealed information, a zoo and its zookeepers, and a history of ecological violence nearby.

I edited this book quite a bit between acceptance and publication with the help of one of Birds, LLC’s editors, Chris Tonelli. At some point I got frustrated because Chris (justifiably) wanted so much in the book to be explained to its reader. Savage Pageant can be a vexing book to read. There was a lot of resistance on my part to hold clarifications at bay in order to produce a text that invites re-thought, redoubling, and a sustained form of critical attention to potentially unsatisfying little gems. It is and is not a messy book. If you’re paying attention, I’ve left little sandwiches scattered throughout to sustain you, to summon another look, and to provide wholly unreasonable explanations for this poem here, why this image there. “Explanatory Note” was my way of lovingly mocking Chris’ keen eye, which ultimately did push me in directions otherwise unseen while allowing me to dig my claws deeper into the framework of the initial blood and meat of the thing. I appreciate him and I appreciate a reader that is willing to gnash around. Willing to search for dark matter that might not delight or perform a spectacle of sorts. This is a book of accumulations. Like this poem, Savage Pageant collects and builds with pieces of seemingly disparate information and genealogies to suggest that yes—perhaps life feels a bit random, but it mostly is not. History mostly is not. Do you choose to pay attention? And what will you do with of all of these reverberations, writhing endlessly towards the stony lake and a steady diet of misinformation? What beasts might we birth from observing these innards, this cyclic history of love and greed and loss and more loss? If not grief, a break. If not an utterance, a new sense of movement in the world that we share and shape and build. One that is tender, full up of it, and green.