Home > Features > In Their Own Words > Lindsay Illich on “Snowbound: An American Idyll” 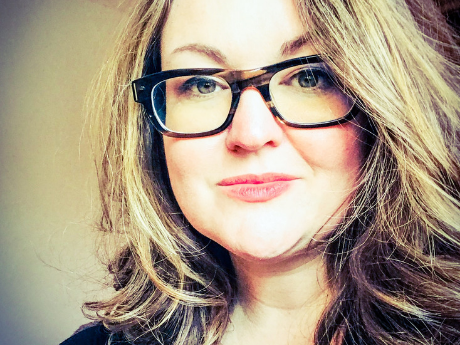 
Al Roker, star-spangled-—give me your mesoscale
bands, isotherms not mutability, say the future

so I'll know it. Desire is recognition, a kind
of thinking, the ends of time

a door on one side marked free will and
on the other predestination. I walked into

the future, and mine was a room: bleach
white plaster, birch branches in the vaulting.

My limbs tried to be owls. Put your hands
together. If I wanted to be outside well

then I would be, but someone here thought
put your hands together. Standing at the window,

looking through its falling, consider its legibility:
a cardinal sliced the distance between me

and the fencepost. What if my whole life
is a series of innocences. The geese are a series

of innocences coming down from Canada.
In Buffalo, where pink sky and listen

winter is a minor baptism, Peter
is this your annotated bibliography, your

help, I suppose. It was the rain gave us
imagination to invent a heaven, sky

so big we thought about it all
the time, the weather or not central

to our understanding of what it is
to be human. I look at you and I can't

think of anything. All day the nothing falling
on the heaps of nothing, to the wheel-

ridge and then the sills, nothing coming
from nothing, Al Roker standing

falling in nothingness and quietude,
the first alone the angels did say.


From Rile & Heave (Texas Review Press, 2017). All rights reserved. Reprinted with the permission of the author.

On "Snowbound: An American Idyll"

A lot of my work deals with the mind or maybe memory, our access to it and how poetry as a medium can show us the ways our mind collapses periodicity, so sometimes (like in a poem) we are remembering everything all at once. In this way, a single poem is a singular act of that access at a given span of moments (the time of writing it), making the writing of it an event and the poem itself like an MRI, the artifact of the access. That makes the process of writing sound like it happens automatically, somehow beyond our traditions of the lyric. I don't think that's the case, but I do think that the lyric tradition historically has grown counter to narrative logic, which is why you can leap the way you can in poetry and not so much in prose: the body of a poem has its own grammar and moves suggestively. Sometimes you have to close your eyes.

I wrote this poem during one of several pounding storms in Boston that ended up dumping almost 110 inches of snow that winter (2014-2015), with John Greenleaf Whittier's long poem "Snow-bound: A Winter Idyll" at the edges of mind. And the snow itself was lending itself to a kind of mental coalescing of images and ideas, the accumulation of memory, the paradox of collectivity and loneliness. Addressing Al Roker, a kind of god of the weather and to me, so American, made sense to me. Reading it back now, I understand that this poem couldn't have been born without Jack Spicer, Lavinia from Titus Andronicus, Vico, Chris Martin's collection Becoming Weather, and also, of course, Ben Lerner's work, to whom the poem is dedicated. Like snow on a television screen, it seemed like the snow coming down from the sky was some sort of reverse rapture in which the world was being heaped upon with the nothingness of being, like a snow apocalypse. And then it's just you, a self alone even amid multitudinous connections, another kind of nativity.