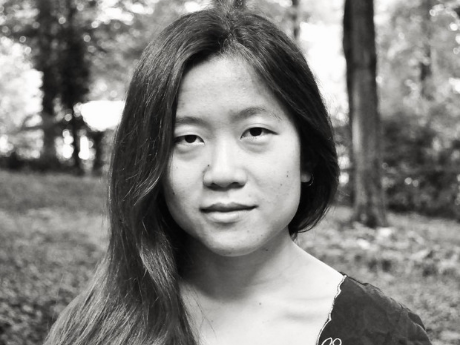 Alien status, a blue bourgeouis dress, the hustle of Rome. A waltz—
zoom out—the citizen ingenue's cool, cool crinoline and persona
buckling in the silhouette the ahistorical hourglass. I have no story,
your shout into this century's solar wind, a yellow ribbon on a bomb
compromised by compromise, a citizen's birthright, a little box
xeroxed white, the alien body folded like a french flap in the epic
determination to predetermine the alien body in the here / now.
War is a feed. To be angry is to be fed up, and citizens eat blood,
education aside. I should explore, not go off. The future, the TV
vectoring the colonists' self-portrait, thumbs up for this handmade
family, zoom in—Citizen 2 karaokes in low gravity (Zou Bisou Bisou),
unlikable kiss shot to Earth besmirched. The camera winking, stiff
grafts in the ship's greenhouse untrembling at the speed of light,
turmeric tumescing quietly, and the brilliant soldier of a pear sapling.
Here on Earth, the rapist pledges, fear femmes my waist, wastes
sure as the sun is wasting. Zoom out—the atomic story is smooth
in places if no one is protagonist but particle in motion or minor
residue of emotion's creation myth. I don't know why I love us, I
just do. Zoom in. Citizen 4 weeps, eats a webcam, eff-you-s HQ,
quarantines herself to the brink with paper porn. Citizen 1 goes by PJ.
Kick kick, my grief is underfoot, empty bucket and an enemy on top
promised a drink of water for love, the landing we couldn't stick,
last zoom—every alien has a face. My face, a flipbook, a free pass to
outré worlds. Reassignment of number, denial of trial. A glass wall.
Might-be-colonists put the finger to the screen to zoom out or in,
napping on—baby, wake up, the foreign body just fell in the dream—


From The Bees Make Money in the Lion (Cleveland State University Press, 2016). All rights reserved. Reprinted with the permission of the author.

On "Aubade for Non-Citizens"

This poem used to have an epigraph: "Exploring the solar system as a united humanity will bring us all closer together." This comes from the mission statement of Mars One, a non-profit foundation that aims to establish the first human colony on Mars by the mid-2020's. When I first became aware of the Mars One marketing campaign, my emotional response included incredulous wonder, to be sure, but also anger and fear. Reading about the standards of physical, social, and psychological desirability potential colonists needed to fulfill in order to be deemed eligible reminded me of the questions asked of immigrants attempting to obtain American citizenship—Have you ever been a sex worker? Are you willing to go to war for the United States of America?—and the message of undesirability that underlies such questioning. When I learned that Mars One planned to narrow down their applicant pool to four final colonists via a reality television audience vote, I was reminded of how popular culture, deformalized media, and social narratives can serve as powers that can enforce (or denounce) the structures of phobic policy. And the purported prize of leaving Earth without a return ticket reminded me of the privilege of my immigration history: I might not feel like I belong to any nation, but I technically do, and thus can travel to other lands with relative ease and then come back to the place I call home. In this regard, the Mars One campaign speaks to people like me, people who can afford to leave their home in an act of self-actualization or stay where their roots are called to deepen. The science-non-fiction of interplanetary exploration does not yet speak to those who have no choice in their displacement, because this brand of exploration is in truth a colonization, and colonization cannot go forth if every person of this exploited planet is acknowledged as a global citizen to be protected from exploitation.

That paragraph felt pretty good to write, given my relative absence from it. The emotional genesis of this poem (and those that followed for the next two years) was more personal than that. For most of my life, I had an Alien Registration Card. This was an object of otherness and privilege, because for every institution that did not allow me inside without it, upon my producing it as documentation, most eventually let me in. I turned this card in in 2010 when I became naturalized, and began experiencing more difficulty with institutions, not less. I learned to anticipate times and spaces in which I would be asked to exist only as an alien, not a citizen. I learned a form of invisibility, and how to live with it. And in learning to live with invisibility, I learned to disengage from the most painful realities of society. No. I don't want to turn away like that. I don't want to leave this world behind like that.

But what does that mean to me as a poet? I felt I could only take my earthly fears to a new place to colonize it with good intentions. In the end, exploring that idea became as important as expressing grief. This was the first poem in which I found a way to speak as both alien and citizen, and acknowledge the pain that runs through both words. When I address the avoidant would-be-colonizer in the poem's conclusion I address myself, too, and my complicit compulsions to disengage from the world, to not look back.

One day in New York City, about twenty years ago now, I was mistaken three times on the same day for a man I had never met. It happens in my life, every now and then, but that first time, it was specific: there was a festival of South Asian dance happening, and there was a dancer there who bore some kind of strong resemblance to me. One person recognized me on the street, another woman in the subway, and finally sitting down to dinner at Baluchi’s in the West Village, the waitress exclaimed in delight when she saw me. T