Home > Features > In Their Own Words > Margaret Ross's “A Timeshare” 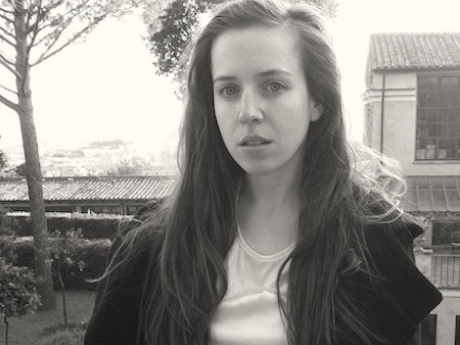 Five o'clock again in the rented living
room. Nothing wrong. Heliotrope continuing
to fade into upholstery. Buttons pressing back
against the back of the couch make the surface

cave, just decorative, faint garden stamped
on a cotton throw. And that the world. Yes no. Yes though
if there's such a thing as time at all I never saw it
move and if that's so then what am I

afraid of? I hung a muslin curtain to prove
breeze, a nimble petal, tall fluctuating seraphim
who keeps watch over me. Q: What are you
doing down there in the

there in the meantime? X: All day
I am an orchard at midday when the stunned air
pauses, bronze and stupid, terse with flies. Don't lie. I'm
in the living room. Seconds dropping

from the faucet to the metal bed
of the sink: this is your one
now this is, now late, nobody waits for thee
on the greeny moor where I was

lain all stuck with yew, or the Q: Did we
outgrow our dream of a point repaired to when alone?
Some to the landfill, some to the promontory,
each with a small smooth stone tapping soft

on his chest or clicking against his teeth
when on his tongue. Once you thought you would learn
what to do with yourself by yourself. Once the stakes
flush high as a view from the beautiful

private plane, all persons disappear
and he alone looks down on freeways
embroidering the vacant earth. It was still early
in my life. X: Go along. Touch

your eye. Do you know how to do
that thing of whispering a fact repeatedly
until it stops being true? Returned
to this apartment after

being gone a while to find
everything replaced with replicas, identically
arranged: the cedar desk had the same false front
as before and fitted with

the same brass garland handle
still unable to pull out a drawer because it is
no drawer. That was the soul. Communicating
chambers of my third-story home

string a sentence furnished with secondhand
pieces. White hooded lamps are nurse to me
all night when I can snap space open
like a parachute, make the walls up

when I lived out a summer with a blind man
by the sea, he kept a steady squint, I closed
my eyes, it was still early then
in my brief life, evenings, every morning

at the folding table painting his toast black
with Marmite, once she was me
we took turns for the bed, a room with
everything white except the book spines

makes you feel the good kind of dead, when
is it, someone's kid downstairs
leans on the bell again, lived winters half
an hour away or seven minutes

on the red line, times he had me
scissor bracken stalks to stanch the mud floor
of the animal shed, from space the night's a hammock
swinging gently out across our Earth, each fall

slushed over, birdcalls' tiny screws
creaking shut your mind
when I used my fingernail to scrape
white tallies on my naked ankle then

think of the long trip home.
You're already home. All the loyal
idiot details know what to do to
stay believable but you

you who sit and let the light rust
reddening all around you waiting for
anyone to come and tell you to
get up get up nobody is.


From A Timeshare (Omnidawn, 2015). All rights reserved. Reprinted with the permission of the author.

When I think of the soul, I think of furniture. The two occupy a similar place in life, so domestic as to be mostly ignored and thereby capable of seeming totally surprising and alien when looked at closely. They're the contours around which experience forms, the surfaces on which we write, think, work, fuck, eat, read, sleep. To trace those contours is to silhouette being.

I wrote this after reading Alphabet, Inger Christensen's great poem about the relationship of the one to the many and how it plays out through nature, history, community, the state, the future. Her form is the wisest map of time I know. An abecedarian where each new section is the length of the prior two combined, it's shaped by two ideas of order: the Latin alphabet (which is, of course, a human construct, arbitrary and beloved) and the Fibonacci sequence (which occurs naturally in plant and animal bodies). So the formal progression of Christensen's poem—its sense of time—is as much an invention of the human mind as something involuntary, biological.

I wanted to write poems that had the same feel for intersecting systems and for the multiple, entangled nature of a life lived between them. To my mind that meant scale shifts. Each poem is set in a single scene from which the feeling comes, but truly seeing that scene means seeing its ties to other times and places, hearing echoed voices not the speaker's: the past inscribed in the present's gestures, the traces everywhere of other lives. The ambition is visceral plurality via image and music.

There's a line of Bishop's that's stuck in my ear: "Everything only connected by 'and' and 'and.'" The words describe the tenuous connections between things, but the sound of the line—that triple punch of the 'and'—belies semantics and finds real strength in those connections. In my own poem, I consider the italicized section a counterpoint to the stanzas around it. It presents an alternate speed of life, another way to add up experience. So the poem conveys different means of inhabiting time. Its title is porous. The plural lives in the singular: a timeshare is premised on the idea of many people taking turns. The word itself seems translucent. Behind its literal definition can be heard a broader resonance. We recognize space is a shared resource but it's as true of time. You can feel yourself a tenant of the atoms you consist of, these structures that used to house other selves and will, in a few decades, house others still.