Home > Features > In Their Own Words > Megan Levad on “Auto Tune“ 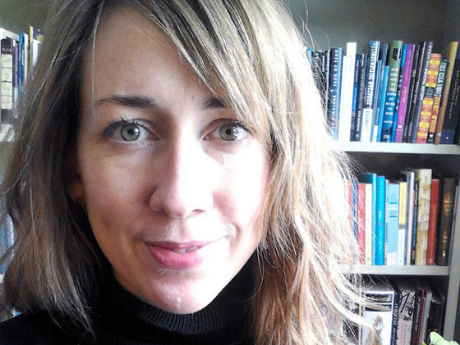 Every singer uses it. Every singer uses it now, except for Neko Case. Except
for Neko Case and Nelly Furtado. Remember Nelly Furtado?
Everyone else uses Auto-Tune because if they don't they'll sound like
indie rock, not pop singers. Who now sound like rappers. Because of
Auto-Tune. Auto-Tune works by taking out the half-tones. By taking out
the half-tones you make humans sound like synthesizers. You can't
hear the shift between notes. Auto-Tune takes a note and pulls it apart
in time. Then Auto-Tune looks for moments. Moments when the singer is
not singing the main note. Moments when their voice wavers, perhaps.
Moments of imperfection. If perfection is the note. And Auto-Tune takes
those moments out. Auto-Tune very carefully slides out those moments
of imperfection. No. Auto-Tune doesn't care. It doesn't have to be careful
in order to do things right. Auto-Tune pulls out the imperfections and then
pushes the sound back together as though imperfections were never there.
As though the human voice could move from one note to the next with
no transition, like a synthesizer. As though the human voice could hold
one note forever without moments of imperfection. Milliseconds
of undetectable imperfection. And we can't, we humans. Humans can't
hear the difference unless the song wants us to. Cher wanted us to. T-Pain
wanted us to. Britney Spears wanted us to. Britney Spears is always trying
to prove to us that she is not a robot.


From Why We Live in the Dark Ages (Tavern Books, 2015). All rights reserved. Reprinted with the permission of the author.

When I was in the final stages of editing Why We Live in the Dark Ages, a collection of poems about how we talk about science, history, and culture, Jeffrey Schultz, among other dear friends, had a look at the book.

"It needs a touch of 'Ceci n'est pas une pipe,'" he said. I knew immediately what Jeff meant—that because the poems are so colloquial, so much about how language actually works and sounds, they needed a foil to underscore the fact that no matter how many ums and likes they use, they are still a performance of speech. Not transcription, but representation.

"Ceci n'est pas une pipe," or "This is not a pipe," is the phrase written under the pipe in René Magritte's painting "The Treachery of Images." The initial joke is quick and pleasing: this is not a pipe, it's a representation of a pipe. The second joke, that there's no real reason, other than tradition as traced by etymology, for us to call that thing a pipe, is a little more unsettling. At least for folks like Laura Riding Jackson, for example, who wanted very much for words to have one stable, rational, somehow natural meaning, outside of fallible human usage.

While Riding Jackson was a bit over-the-top—dare I say performative, representative?—in her insistence upon individual, rational meaning, it's a common concern for most of us. How do we express exactly what we mean, particularly when we're trying to convey important information? Whether that information is emotional or practical, a description of an internal state or an external occurrence, when we look at how language really works, it's a wonder that we understand one another at all.

If, however, the listener's aim is to hear the emotional reality in lyrics like "I like doin' what she likes" and "I will not let go 'til you tell me to," we can begin to have a conversation about representations of consensual sex from Blake Shelton to Boyz II Men, instead of simply mocking grown women who like watermelon-scented candles and mandarin collars. Or we can begin to focus on why it not only doesn't matter how utterly interchangeable and banal those lyrics are, it's essential that they are so bland in order to allow the listener to be co-author, co-singer, to identify as both the speaker and the spoken to, as the object and the subject.

So what do "Auto-Tune" and Auto-Tune mean about how we listen? I think it's lovely that until it became popularized by Cher and T-Pain, among other artists, as a way to underscore the instrumentality of the vocal line (and now all the kids love the robot voice!) Auto-Tune was almost unheard of, or unheard, by the average listener. It's usually considered a sort of shame on the singer's part, the need to use Auto-Tune. But do they need it? Is the star-making corporate model of today so different from the star-making corporate model the record industry has always used? Suggesting that somehow people becoming singers now wouldn't have made it in the past seems sentimental to me.

Rather, it's the assumption that pop fans want a clear, clean, perfect vocal that leads to the use of Auto-Tune. And "Auto-Tune," in its flatness, is meant to mimic that flattening effect of Auto-Tune, which can be detected only if the producer wants us to detect it. In this way, it's also commenting on the other poems in the book--that their at times irritating disorderliness, their exaggerated humanity, their hyperreality, is just as dissonant and estranging as the surreal in poetry, pop, and Magritte's other paintings.

But I think the fact that pop—and poetry—fans don't want to hear a clear, clean, perfect voice, that they want to hear the voice as instrument, whether that means unaltered and identifiable, or mechanized and transformed into something better than human, means that we're happiest, we're at our best, listening generously. That we hear the note, even if the singer doesn't hit the note. That we read the meaning, even if the meaning is confounded by ums and likes. That, ultimately, Britney Spears doesn't have to prove to us that she is not a robot.