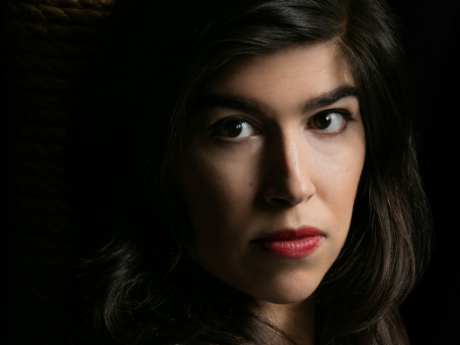 If I were a mosquito, I'd suck
all the blood out from you in five minutes.
If we were stranded together on a desert island,
I don't think you'd last long.
I'd like to come over there and squeeze the living daylights out of you.
I'd like to spin you like a top
and fuck you ten different ways.
Such tender meat—raw—dropping from the bone!

You're sex on a stick.
You're a sex bomb.
You're the sex symbol of our set.
And this is why you have the male friends
you think you do, why women hate you.
The last twelve years, you have no idea
how many millions of haploid gametes I've spilled in your honor!
How I've resented you for walking around
as though you were a normal person.

I'm sorry to break it to you.
Let me explain how this works: when X said
he threw away your press photo, what he meant was
it's tacked up in his bathroom right now, for inspiration.
I think you think my attraction to you is funny.
Believe me, scared is how you should be.

You're a basket of sexual fruits.
What kind of fruit are you?
I'd like to eat you up with my penis
but I don't know how to do that!
You smell like peach. You smell like mango.
The way you smell drives me crazy,

the divots in your back drive me wild.
I love the scoop above your ass—your slender throat—
your little pretty limbs and princess-face—
your gorgeous rippling muscles covered
all over by this smooth, this tawny upholstery—
little doll—delicate flower—the way your ribs
stick out, it's like a second rack—and this,
I love this: what do people call it?

You should always be naked.
You should always hold your wineglass like so.
You have what no one else has—breasts
that demand to be taken notice of
and the tiniest waist I've ever seen.
If your waist were any smaller, you wouldn't exist.


From You Darling Thing (Four Way Books, 2018). All rights reserved. Reprinted with the permission of the author.

On "Oh You Absolute Darling"

Ten years ago, I dated a man who said to me many curious and indeed bizarre things over the course of the nine months we spent together. I wrote down many of these statements, transcribing them verbatim, inserting myself only insofar as I managed order, stanza structure, and line-break. I showed the draft to a friend who suggested I alter one word in the final line. Originally, this was: "If your waist were any smaller, it wouldn't exist." In the finished version, in order to sharpen and more clearly bring out what I perceived to be the underlying meaning, it has become you. That single shift represents my only contribution to the text of "Oh You Absolute Darling."

The result is a poem literally in someone else's voice, though not in the persona-poem sense. In a persona poem, a writer may aim to channel another character but ultimately cannot escape her own lexicon and sensibilities. In "Oh You Absolute Darling," however, another person is actually addressing the poet. The poem is long; the dramatic monologue wears on; some of the statements may feel repetitive, an effect heightened by the lines' arrangement. Reading the poem now as it snakes onward down the page, I feel progressively unsettled. Why does the speaker need to say these things? What is the point of putting these views into language, articulating them out loud? And where is the voice of the interlocutor in this one-sided conversation? Although everything the speaker says is seemingly a form of praise celebrating this other person, the real effect as the weight of the lines accumulate has been to blot her out. "Oh You Absolute Darling" is a sort of negative portrait; like the chalked perimeter around the vanished corpse in a police procedural, it's an outline drawn along what's missing.

You Darling Thing contains many poems that investigate and interrogate power, the expression of desire, and language as a strategy through which one can control another. Many of these are persona pieces from a range of perspectives, including a pony that has just been bitten by a snake, courtesans in a harem, Emma Bovary, and a hunted tiger. As I look back, I notice that "Oh You Absolute Darling" is one of only two poems in the collection voiced by a man. The other, "The King with His Queen," functions somewhat similarly: there, a grief-stricken king whose wife has died expresses his deep attachment to her through a series of hyperbolic endearments. In neither poem is the addressed woman able to respond.

In this sense, a connection can be made to the artwork on the book's cover. I am extremely grateful to the artist E.V. Day for letting us reproduce an image from her Mummified Barbies series. These are literally dolls that have been wound round and round with beeswax. Naturally, Egyptian mummies are the first referent I think of when I look at these sculptures: the wrapping would then signify a kind of promise of heaven, of an afterlife in which the figures will be free. When I look again, though, I notice the Barbies appear bound, hobbled and trapped; the wrapping, purportedly meant as a service, as a help to them, a form of care, is exactly what has hemmed them in. Two of the Barbies avert their gaze from the viewer, while the third in the center arrests us with a look of surprising fixity. Their mouths, of course, are blocked by what envelops them, their voices consequently stolen. Lying there in full view, as the objects they always were and are, is the only form of expression that belongs to them.