Home > Features > In Their Own Words > On Mark Baumer’s “For Thanksgiving this year. . .” 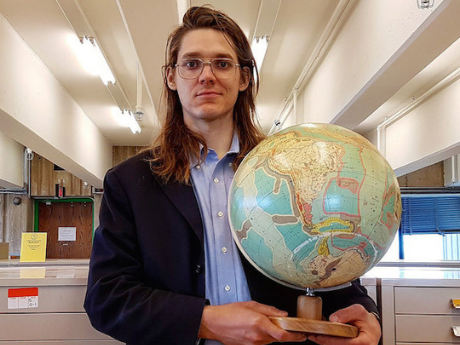 For Thanksgiving this year…

FOR THANKSGIVING THIS YEAR, I sat outside in the cold in front of a police station with a sign that read, “Silent Hunger Protest.” I am aware of my privilege to not eat on Thanksgiving. I think it was okay to use my privilege in this way. A few minutes after I sat down a man asked what I was protesting. Later, another man said, “What does your sign say?” People offered food and money. I tried to bow my head in a way that said, “Thank you, but I’m okay.” One woman handed me a bagel and said, “It’s okay. It’s a plain bagel. There’s nothing on it.” Cars waved or honked. One man rolled down his window and said, “Go home.” A priest asked if I wanted to come to his church and have a free breakfast. My feet were cold. I was wearing three pairs of socks. It was thirty degrees. I got to the police station a little after seven a.m. Every hour was difficult. I didn’t do anything except sit. A man with a beard stopped and said, “I don’t believe in protesting. There is too much good in the world. Protesting creates divides. It sets people against each other. It others the other.” He did not offer any better solutions. On my phone, I read an article that said, “All across the country peaceful protesters turn to violence and block highways.” People probably don’t realize, but driving an automobile is probably one of the most violent things an average person can do. At around two p.m. someone joined me. He just sat down next to me. Neither of us said anything. We con-tinued sitting until it got dark. Then we both walked home. My plan was to return to the police station on Friday and continue the silent hunger protest, but instead I’m going to go to the mall. I will walk around with my “silent hunger protest” sign while people throw their money at each other.

From The One on Earth: Selected Works of Mark Baumer (Fence Books, 2021). Reprinted with permission.

INTRODUCTION TO MARK BAUMER’S “FOR THANKSGIVING THIS YEAR…”

On July 3, 2021, we—Claire Donato and Nik Slackman, two collaborators on The One on Earth: Selected Works of Mark Baumer—went to The Mall at Short Hills in Essex County, New Jersey, where we read Mark Baumer’s “For Thanksgiving this year…” five times in front of various storefronts and mall installations. The piece begins: “For Thanksgiving this year, I sat outside in the cold in front of a police station with a sign that read, ‘Silent Hunger Protest.’”

The first of these readings took place at The Zen Shop, where Claire stood in front of a wall of affirmations including I love you for all that you are, all that you have been, and all that you are yet to become; I love you to the moon and back; you are so loved; you are my sunshine. Nik cued up Instagram Live, and subsequently, Claire read to an audience of one: Nik’s brother, Sam, who just earlier in the day had caught a baseball at a Yankees game. This fact of the day was experienced as divine synchronicity, as Mark was on the baseball team at Wheaton College, where he competed in the Division III College World Series.

Next, we stopped at the mall’s fountain, the inspiration for our mall journey: Claire visited Nik in New Jersey on a whim and desired to toss pennies and make wishes into a mall fountain. A Twitter reply via Christine Shan Shan Hou later compared this fountain to a peeled grape, an image that recurs throughout The One on Earth—not to mention all of the other occurrences of grapes and peeling.

Third, we read in front of The Tesla Store, in homage to The One on Earth’s editor Blake Butler, who one month prior joked to Claire before picking her up in Washington D.C.: “Lol I was in the pink plaid Tesla moon unit for the ride here but switching to a blue Mazda 3 :)”

Blue, blue. Thusly outside of Brooks Brothers Women, we found a 2021 blue Audi. How did this car get into the mall? A child no older than two or three pointed at it as Claire recited this sentence: “People probably don’t realize, but driving an automobile is probably one of the most violent things an average person can do.” The gravity of our pop-up reading was starting to sink in. It felt somehow linked to the trajectory of Mark’s work. We had begun the afternoon in a satirical, light space and were moving somewhere darker and weirder. What would happen next?

Indigo (stylized !ndigo) is a Canadian bookstore that opened its first American location at The Mall at Short Hills. We went in to buy a confidence-oriented pop psychology book whose title we shall not disclose here. Suffice to say, our final gesture took place in front of a bookshelf labeled BUSINESS, while “Life Is a Highway” played in the background and Patti Smith’s portrait looked over us, accompanied by a quotation: Freedom is... the right to write the wrong words.

Perhaps these are not the right words with which to introduce Mark or Mark’s work. How could they be? Nor are there words to describe the feeling of infinite cosmological oneness we experienced on the eve of Independence Day at The Mall at Short Hills. The synchronicities that took place amidst our pop-up readings felt graced by Mark’s spirit. We wished he could’ve been there for it, and he was. At the end of “For Thanksgiving this year…,” Mark writes: ​​“My plan was to return to the police station on Friday and continue the silent hunger protest, but instead I’m going to go to the mall. I will walk around with my ‘silent hunger protest’’ sign while people throw their money at each other.” It now occurs to us we should have read in front of a food court.