Home > Features > In Their Own Words > Randall Potts' “Fable” 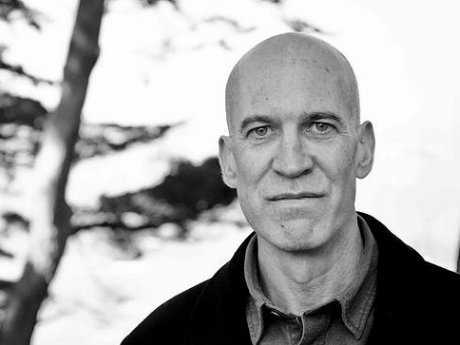 
1.
I began innocently enough
Dressing the Apple tree in unmatched socks
To dissuade the Deer from grazing
To deter the Codling Moths from burrowing
To keep the Squirrels at bay—
After all, the fruit was mine.

2.
Socks made Tree's limbs look naked.
What if I clothed them too, used hooks & yarn?
I decided to crochet in gold.
Twigs too delicate for yarn, I stitched with string
Disguising every seam with tiny knots.
I gilded Tree, limb by limb—
Black twig tips I left unclothed, so light
And wind might fondle them.

3.
I couldn't stop stitching.
Seashell was empty, its silence lost
To echoes, exiled to noise.
What could I do but fill it? Go at it
With hooks & yarn. If a living Tree
Could be clothed, why not a Shell?
In Shell's blue spiral, I nested gold squares.
Shell was luminous, silent again.

4.
Then, oblong, unbalanced Egg
Fragile, alone, needed to be clothed.
I hooked a hood of thin gold thread.
I left a pale oval, where a face
Might appear. I never dropped a stitch.
My hooks sang only being or nothingness.
Egg pulsed gold light—
Its dark inside secure.

5.
Where my yarn lapsed, shadows
Began, extending every object out in time.
Fine gradated shadows of the Apples
The Tree, the Shell, the Egg—
Shadows articulating time, its
Ceaseless touching, prodding on.
There was no way to intervene, to save.
My hands lay folded in my lap.
The gold quivering with light.


From Trickster (University of Iowa, Kuhl House Poets, 2014). All rights reserved. Reprinted with the permission of the author.

I wrote "Fable" before Trickster had a title, even before the title poem was written. "Fable" was a crucial poem for me because it was a literal drama of double binds between art and nature that was resolved paradoxically.

In Native American traditions, the trickster is often the victim of his own stratagems, caught in traps he deploys to trap others. Tricksters often use transformation and are frequently trapped by it—a reversal occurs. As Jungian scholar John Beebe writes, a trickster can also be the creator of double binds in which any choice appears futile and which only a trickster can reverse. "Fable" is a song about reversals and useful paradoxes.

"Fable" was commissioned for a reading to accompany an exhibition at the Chandra Cerrito Contemporary Gallery, featuring a large installation of work by Bay Area artist Esther Traugot. Traugot meticulously crochets very fine gold thread around or inside a variety of natural objects ranging in size from a quail egg to a tree. The trickster double bind/paradox became a literal visual narrative for me in Traugot's work: the gold thread transforms natural objects into art, while simultaneously undermining their intended natural purpose; so it is possible to preserve, but not to save.

A quail egg is partially enclosed in a gold thread sheath that contrasts with the subtle natural coloration of the egg; gold suggests alchemical transformation; the gold thread protects the egg both literally and by elevating its status to art, yet the egg is rendered useless as a means of natural reproduction. In this narrative, art practice creates and reverses the double bind of creation and destruction by making the double bind explicit and letting the paradox—the art—be the resolution.

"Fable" is also an analogy for our relationship to the natural world, now in the throes of a manmade mass extinction. Can we acknowledge our culpability and overcome our drive to dominate and control, and accept our limitations as animals? As Joseph Beuys demonstrates, art practice is an example of how we can accept limitation and by doing so, transform it.

I revisited the gallery several times to watch the shifts in natural light that created a secondary drama of shadows across the walls, ceiling and floor. On one visit, I met Esther Traugot and learned she had carefully calibrated her pieces in relation to light and shadow as a way of including time in her work. I also spoke with her about her process and technique; she provided me a wealth of detail. All the artworks in the poem are hers; it was important that the artworks have integrity as a group because the speaker is not simply Traugot, but a lyric "I" that embodies resignation and achievement: a paradox that drives art practice.