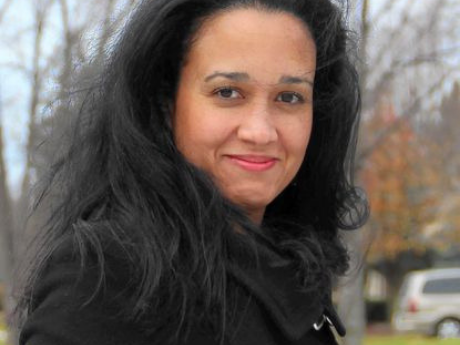 Why recount details beyond facts of fate
when the lack of love shown remains unsolved?
Kristine Mihelich bought a magazine
from a convenience store on January 2.
On March 16, Timothy King's sister
loaned him thirty cents for drugstore candy.
Days after disappearing, their bodies
were left in the snow along a major
road like the children abducted last year.
The FBI launched its biggest manhunt
to date, but no indictments ever came.
Riding in cars, we studied the shoulders
of roads for small bodies like our own, proof
violence roots like ragweed, grows everywhere.

From Troy, Michigan (Futurepoem, 2014). Reprinted with the permission of the author.

Troy, Michigan is a collection of sonnets inspired by the city map of my hometown—I wanted to represent the rectangle shapes repeated throughout of the city plan. I chose the sonnet form because younger writers often use it when they attempt to become a poet. Even though I no longer qualify as a younger poet, this book was also about bringing to life a version of myself from the past to try to make sense of the landscape that had shaped my understanding of both safety and danger. The sonnet allowed me to re-imagine this place of self-identification, of action, and of courage as a site of active transformation, a place that unfolded before me as I sought to rediscover it.

One of the underlying tensions in the book comes from the main character's desire to be included. She perceives her exclusion to be a result of xenophobia or racism. But her isolation also stems from the physical design of the town, the way the houses are arranged in subdivisions, each house siloed in a wash of a wide lawn. Her feelings are soon complicated by the abduction of four children in a neighboring city, which comes as a shock to all the families in the area.

My parents shielded me from reports of the murders, but children at my elementary school talked about it. We had a sense of fear and wonder about the whole thing—as there was much we didn't understand. Though we were still young enough to always be under the watchful eye of our parents, soon we would be walking to school on our own. Police officers who visited our classrooms warned us about "stranger danger", but we did not know how to tell the difference between someone we did not know at all and those we did not know well. The fire department gave neighbors stickers to put on their doors—indicators that these were safe places for us to retreat to if being chased. But even then it was not clear that these safe houses were true. I already understood that there were people in the neighborhood who were not happy that my family, an African American family, had moved in. I knew that I was not invited to play with children at these houses and I feared walking past them—sometimes I would hold my breath. These families were in the minority in my neighborhood, but their presence was significant to me in a symbolic way, perhaps in a similar way to how my family's presence was significant to them.

I still have such a distinct impression of riding up the interstate, looking at the overgrown grass along the shoulder in the summer for bodies of children that had somehow been missed by the authorities. I would do this looking unconsciously, aside major routes like Woodward Avenue as my parents drove north into Birmingham.

The children disappeared while enjoying normal activities we engaged in at the time—they were growing into their independence and moving out into the world on their own. When the first kids went missing, no one thought something terrible had happened to them—this fear was not part of our collective imagination yet. But once it was clear they would not be coming home safely, the community became even more bunkered. Troy, Michigan tries to uncover what kind of people we were in that time, in that space.