A Conversation with Christopher Soto 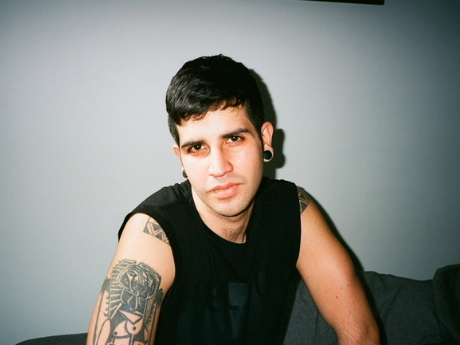 Christopher Soto is a poet from Los Angeles, currently based in Brooklyn. He is the author of Sad Girl Poems (Sibling Rivalry Press, 2016) and editor of Nepantla: An Anthology of Queer Poets of Color (Nightboat Books, 2018). As a co-founder of The Undocupoets Campaign, he worked to make poetry publishing more accessible for undocumented poets, by challenging poetry book contest rules that once prohibited undocumented writers from applying. Soto's work is always political and unfailingly unapologetic. His first chapbook addresses the intersections of queerness, youth, domestic violence, and the concept of home. The manuscript he is currently working on discusses mass incarceration and the police state. Considering all of the work above, this interview will focus exclusively on the Nepantla anthology, which will soon be released in May 2018.

Christopher Soto and I first met through William Johnson at Lambda Literary, where I began interning this year. I was able to help Soto during the final stages of production on the Nepantla anthology. Together, we worked to secure contracts from publishers and estates, we proofed the copy of poems included, and we completed the first anthology for queer of color poets in the United States. This anthology covers approximately 100 years of queer of color poetry, from the Harlem Renaissance until today. Everyone from Langston Hughes, to Audre Lorde, to James Baldwin, to Natalie Diaz, to Ocean Vuong, to Joshua Jennifer Espinoza is in this anthology. Getting to work on such an important anthology was a very inspiring experience for me, as a young queer writer of color. Nepantla is both an important reminder of the countless contributions of queer poets of color to the literary world, as well as a celebration of the current and future queer POC poetry community. It is my honor to have worked with Christopher Soto and to do this interview with him about this historical, and much needed anthology, which will definitely fill a gap in the world of literary studies, gender and sexuality studies, ethnic studies.

CO: Nepantla is very interested in political and provocative work. Can you explain this editorial choice

CS: Yes, I decided to start this anthology with a poem by Pat Parker called "Don't Let The Facists Speak." I'm drawn to poems that are unafraid to show the resilience of my QPOC community and also our tenderness and laughter and struggle too. I didn't want to quiet or assimilate the voices of queer people in this anthology. I wanted to show our bravery and rebellion. I am proud to publish poems about kink and resistance to police violence and resistance to colonization. I wanted to show that queer people of color are not merely passive victims of homophobia, transphobia, racism. Rather we have been active in protesting and fighting for our dignity against meaningless vitriol for centuries.

CO: The accessibility of Nepantla as an online journal is so important. How do you think this print anthology will be useful in ways that the online version can't be?

CS: The online journal is accessible because it's free. I think that's what you mean? This printed anthology is not free but it is useful. I created the print anthology because professors were assigning the online journal to their students and printing out the journal as a packet for them. Libraries and bookstores were emailing me, asking for physical copies of the journal. I decided that it was time to give the academics, librarians, poets, readers what I think they want and what I wanted- a book to hold. The anthology is much different than the online journal though. The online journal publishes predominantly living poets, often early in their careers. The anthology covers almost a century of literary history and features many of the greatest poets in American letters, after their passing.

CO: How do you think the audience of Nepantla will change with the print edition?

CS: To be honest, I have no clue what the audience will be. I hope the audience is everyone who comes across the book. Yet, I edited the book thinking about LGBTQ literary classrooms whose syllabi are too white. I edited the book thinking about Ethnic Studies classrooms whose syllabi don't have queer and trans people celebrated. I want this book to be picked up in these classrooms, as the next step into a trans-feminist future. I want this book to pick up where This Bridge Called Our Backs edited by Gloria Anzaldua and Cherrie Moraga left off.

CO: You've spoken a lot on the privilege of poetry; how does this privilege function in print publishing?

CS: Privilege can be found anywhere we look. It took economic privilege for me to be able to edit Nepantla for little financial compensation and after my work hours. If I had been working multiple jobs to feed my family, then I'm not sure I would have been able to edit Nepantla. It took social privilege to edit the journal too because I knew many of the publishers and estates and poets and how to contact them for publication rights. This job would have been much for difficult if another poet, with fewer connections to the poetry community would have tried to do it. There are many privileges that I sit on, which made the creation of this anthology possible.

CO: What was the process of getting Nepantla funded like?

CS: I was lucky to have quick support. Nightboat Books was the first publisher I approached about creating this anthology. Stephen Motika, the editor at Nightboat, immediately expressed interest in the project and then after we met for coffee, the general outline of the book and financial responsibilities were set. Lambda Literary also supported the creation of the Nepantla anthology greatly. This anthology really would not have been possible without William Johnson and Lambda Literary, both of whom the book is dedicated to.

CO: What boundaries, if any, do you think Nepantla will face as a print edition?

CS: I'm not sure what you mean by boundaries. I don't see boundaries for the anthology. In the introduction to the anthology I do mention some intellectual or creative or linguistic limitations to producing this anthology. For example, I think I wish the title of the anthology would be Nepantla: An Anthology for Queer, Trans, Gender Non-Conforming, Intersex, Agender, etc. Poets of Color. Though, I don't think you are asking about such limits to the book? Also, I think people can just read the intro to the book for those nuances.

CO: What is next for Nepantla? Will we be seeing more editions?

CS: When I first began editing Nepantla I was a grad student at NYU with no publications. My life was much quieter and drunker. At the moment, I don't have enough time to continue editing the online journal and I don't think it would be possible for me to produce anything greater or much different than the anthology I just made in print. The printed anthology feels like a goodbye to the project that I started nearly five years ago. I've been keeping my eyes open for a young poet to train and take over the Nepantla online journal but I haven't found the right person yet. I approached Luther Hughes about taking over Nepantla last year but he is editing Shade and is very committed to that project. I believe in Luther Hughes' editorial vision very much and I'm in love with what he has done at Shade. In time, maybe I find someone I trust to continue Nepantla as an online journal. For now, I'm going to celebrate the anthology and keep working on my debut collection of poems.