An Interview with Alex Dimitrov 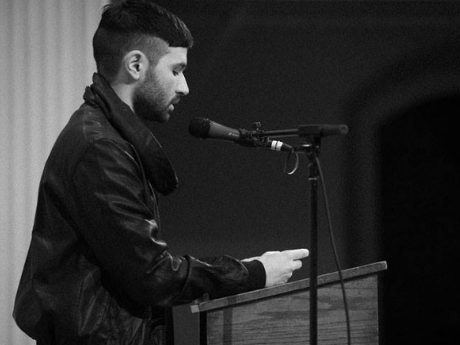 I first met Alex Dimitrov near the end of 2013, through a mutual friend, Jameson Fitzpatrick. We went to go see Alex read his poems at KGB Bar in New York City and then drank a few beers together afterwards. At that time, Alex was doing promotion for his first collection of poems, Begging for It, and he was also announcing the close of his renowned queer poetry salon, Wilde Boys. Over the past few years, as I have been completing my MFA at NYU, Alex has been an insightful and supportive friend. In this interview, Alex and I discuss his second collection of poems, bicoastal American life, and his upcoming events and projects.

Alex Dimitrov is the author of American Boys (2012) and Begging for It (2013). In 2014 he launched Night Call, a multimedia poetry project through which he read poems to strangers in bed and online. Dimitrov's poems have been published in Poetry, The Yale Review, Kenyon Review, Slate, Poetry Daily, Tin House, Boston Review, and the American Poetry Review, which awarded him the Stanley Kunitz Prize in 2011.

Christopher Soto: Your last collection, Begging for It, is largely a sequence of persona poems. You bring to the forefront issues related to love, lust, loss. What should we expect stylistically and thematically from your new work?

Alex Dimitrov: Some of the new poems have been in a few places and perhaps pointing directly to them will do more for a reader than what I have to say. I'm fairly conscious, however, that the new poems are different than Begging for It, which was basically 27 years of my life and my experiences with love, lust…the things you name, all of that in one book. I threw everything of myself and how I understood the world into that book. My 20s are in that book. Everything before my 20s is in it. So obviously I can't do that again. But stylistically I'm also interested in surprising myself and describing the world in a different way, describing what it feels like to be a person in a different way. Some of these poems begin on the east coast and take you to the west coast. Then back to the east coast and oh, we're out west again. Where America begins and ends—those are the places that my imagination seems to be interested in. I don't like feeling bound and each coast gives you a different sense of freedom. I like to at least imagine that there's some way out other than death. And then there's JFK, Jr., Lindsay Lohan, Monroe, Kennedy…just some of the personalities that may be in the book.

Christopher Soto: When I think about your work, I think about existential desire; a desire to communicate with something greater than the self (be it love, or God, or pop culture, or the literary cannon). I'm interested in knowing what role desire plays in your work, if any.

Alex Dimitrov: I'm happy you say that. There are times when people ask me too many questions about the self in relation to my poems. That's the part I'm least interested in. The self. I'm only interested in the self as a gateway to other things…like pleasure, religion, death, culture, personal and collective histories, celebrity, and so on. Obviously we can't experience the world without a body so yes, the self has to be addressed. But I try to get the self out of the way as much as possible. In the first book I did that by excessively examining the self until it exploded, until there was nothing left…and now I'm more interested in blurring it, erasing it…throwing something over it. This is why Lindsay Lohan and JFK, Jr. are fascinating to me as people in the culture, because of their relationship to the public self and the unseen self. Not being fixed is one way to trouble the self. So the mind in these new poems is constantly jumping from one image, one person, one subject, one place to another. I'm trying to live that way too. To be less available to any one thing or mode or mindset.

Christopher Soto: While on the topic of desire—both of us tend to float back and forth between California and New York, as if looking for some greater stimulation, some newer daydream (or at least, for myself). Can you talk about your relationship to California and how the change in geography might impact your process of creating work?

Alex Dimitrov: I try to get to California anytime I don't have to be in New York, which isn't as often as I'd like. If New York didn't exist I wouldn't live anywhere but LA. Many of the new poems were written there over the past two years and I like the poets and people that are out there. Kate Durbin and Melissa Broder are friends. We did a reading in Venice, on the beach last year. I told Melissa we should do it again because it was just so communal and beautiful. I don't know, I guess LA makes me feel lost and free. It liberates me in a different way than New York. To be lost is one way to be liberated but our culture will never allow us to believe that because that way of thinking does not serve capitalism. In an interview with Jonathan Cott from the late 70s, Susan Sontag talks about the idea of dropping out and what we can learn from the 60s, despite the fact that the 60s are seen as a failure, and she more or less argues that we need to create an actual space in the culture to be lost, to be free, and just how important that space is. I'm not looking to be found or to find myself. I'm not interested in who Alex Dimitrov is. I feel like New York is the only city that's allowed me to live that way, and whenever I'm in LA I feel similarly understood too. But I still don't have a home. I don't really belong anywhere. Hopefully it makes for some good poems.

Christopher Soto: How does the landscape of each place, or the vastly different temperaments of New York and LA inform your creative process?

Alex Dimitrov: I love how vast LA feels. That's a good word for it. I also don't know if I've ever known where LA actually is. It's somewhat invisible…or perhaps a better way of describing it is…it never really appears. You keep driving and driving and where are you really. Is what's in front of you LA? What's behind you? It starts to look the same at some point. Both LA and New York are lonely places but in different ways. In New York you're alone because everyone is always around you and you're fighting for your internal space. Which can be demoralizing and tiring. In LA you're alone because you can be as far from people as you choose to be, and to be close still involves getting in a car…so how close are you really? I suppose that's America at large. We feel like we're connected and close to one another but it's a terrible lie. There's something about the light in LA that puts me out of my mind, literally, and in a kind of lull. Maybe some people hate that but I enjoy it. It's like writing a poem. I'm here but I'm not really here. I'm going to another place. Also, both of these cities are not pretending to be anything but themselves. They're not pretending to be honest or beautiful or redemptive. They're pretending to be other things, but not those things. I really see them both, and how one lives in them, as symbols for American ideology. For better or worse. Most days I don't feel comfortable living in America.

Christopher Soto: The other day we were chatting about an upcoming reading that you have with Rita Dove. Can you tell us about this and other upcoming events that you might have?

Alex Dimitrov: Oh, Rita was incredibly kind and invited me to read as one of the three poets for her Tenth Muse event at the 92nd Street Y. It's been a dream to read there and I think I may read the title poem of this new book, which is a long poem that I began working on in September of 2013 after I got back from one of my trips to LA. I just finished it recently so I've been slowly working on it for…about a year and half. That's been a real pleasure because it's like feeling that you have something exciting to wake up for. It's functioned that way. I'm sad I've finished it.

Christopher Soto: This past year you launched Night Call, a multimedia poetry project through which you read poems to strangers in bed and online. Can you tell us a bit more about that project and any future projects you might have planned?

Alex Dimitrov: Night Call is one of my favorite things I've done and it's largely undocumented. At least publically. I documented it in my own way but I don't think I'll share that. As long as I'm alive at least. Which is to say, I don't like going into detail about it because it was such a personal, visceral experience with one other person, each time, in their intimate space…whether that's their bedroom or kitchen or living room. I met up with strangers all over New York…Manhattan, Brooklyn, Queens, it took me many places. And I read them poems I hadn't read before, probably poems I won't even publish, and they shared a lot of themselves and their lives with me. Night Call was about finding intimacy on the page and off the page, right there, in the same room. It was art and desire made real. It was also my way of completely avoiding being reviewed or talked about or judged. I just thought, I'm going to create this ephemeral, personal, beautiful thing…and that experience will be alive only now, only once, only between me and this person, and then it's done. Kind of like life maybe. And there were several places that wanted to review it and write about it, really great places, but I thought it was important to say no. That would have done something else to it. And it felt great to say no. We're back to thinking about freedom I guess. Maybe Night Call was about freedom.

Alex Dimitrov: I've always loved your tattoos and your piercings. So let's end there.