An Interview with Tim Johnson of the Marfa Book Company 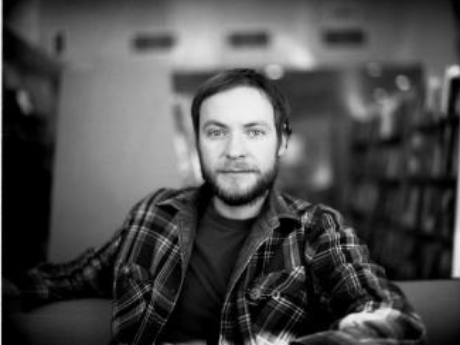 Tim Johnson lives in the middle-of-nowhere's center-of-the-universe, Marfa, Texas, where he runs, with his partner Caitlin Murray, the incredible Marfa Book Company—a bookstore, gallery, and occasional music venue. He is also a poet, editor, small-town flâneur, musician, and prolific collaborator. Enough people have gone through town that the bookstore isn't a secret, but I was curious about some of the behind-the-scenes magic, so I asked Tim a few questions.

Joshua Edwards: When I first stepped into the bookstore, and Marfa for that matter, it was immediately clear that interesting things are afoot. I thought, This is a visionary place. Can you talk a little bit about your vision for the bookstore and Marfa's relationship to vision?

To attempt an answer to your question, vision does play a role in the way that Caitlin and I think about the Marfa Book Company. There's that secular vision that looks, that shops, or passively admires, of which we're somewhat wary. And there's that other kind of vision, one we experience as a kind of responsibility to make things, to be active, and, consequently, to engage. It may sound like I'm paraphrasing Matthew Stadler (of Publication Studio), but it's certainly worth repeating that bookstores occupy a curious spot in the commercial world. There is, and probably has always been, this sense that they exceed a simple commercial service and provide a kind of reflective and even generative site for cultural activity. This is what we're investigating at the Marfa Book Co. Or, at least, that's the way it seems to me, because that's what interests me about what we do on a daily basis. We try and test the nature of the bookstore. And, to an extent, we even flaunt or try to confuse the commercial aspect. And we do that by hosting performances, films, music, art shows, by releasing albums, publishing books, and so forth. And some of this stuff we do for free. Or we have books that are not for sale, and we intend to have a "library" of books that you can check out but you can't buy. At the same time, we need to pay the bills, to make sure the space exists in five and ten years.

Other bookstores, such as Counterpath or Flying Object, probably deserve mention here, because what we're doing, and have been doing since 2006, is not altogether rare. Woodland Pattern, of course. In fact, those stores do a lot more than we do!

In this context, it's important to add that our geographic isolation and the art historical association that derives from the fact that Donald Judd established the Chinati Foundation here give it all an added glow. Perhaps it's this glow, plus the exceptional quality of light in the Northern Chihuahuan desert which gives us this sense of vision?

Joshua Edwards: Speaking of the desert, for those who don't know, what's the big draw that brings people so far out?

Tim Johnson: Well, the draw for Marfa is the Chinati Foundation, but the bigger draw for the area is Big Bend National Park. Considerably more people visit the latter than the former. However, each year increasingly more people come to visit Marfa, to see the art that's installed here. Overall, I think we receive about 10,000 visitors annually, which is not an overwhelmingly large number, but it makes a big impact on a town of our size, roughly 2000 inhabitants.

Joshua Edwards: There are also quite a few festivals in Marfa, right?

Tim Johnson: Well, we've now got Cinemarfa, an annual film festival which focuses on the intersection of Film and Art. And El Cosmico, a small hotel and camping spot, hosts a music festival each fall. (This year the musical guests included Robert Plant, Patty Griffin, Alejandro Escovedo, Shawn Colvin, The Black Angels, and a few others.) And both the Chinati Foundation and Ballroom Marfa, a non-profit contemporary arts space, host what we call Weekends, and there is often a festival atmosphere. And we've got the annual Marfa Lights Festival. This last one features chicken on a stick and local bands playing off the back of a flat bed trailer. I mention the Marfa Lights Festival to emphasize that there's this combination of events out here, some you might compare favorably to what happens in large cities, and others are characteristically small town affairs.

Joshua Edwards: I've never been in town during the festivals, but it seems like every week I have been there at least one incredible thing was going on, lots of which happened in the bookstore. Can you talk a little bit about the programming, shows, and exhibitions you put together?

Tim Johnson: Well, it helps to remember that there's no movie theater here, and until recently we had no music venue. So we're all responsible for generating our own entertainment. Add to that our desire to make the Marfa Book Company a space for activity of all sorts, and the fact that there's this general curiosity about what's going on out here, and it becomes possible to do a lot of different things. In one way, we're open to hosting whoever happens to be coming through town, including the resident writers from the Lannan Foundation, which has a residency program in Marfa, and the resident artists at the art institutions. More personally, we're especially interested in poetry, and language-based and book-based art, so those are the things that we seek out.

Joshua Edwards: You had a really interesting show up in your gallery space when I was there in late 2010, work by Ian Hamilton Finlay that sort of exists at the intersection of poetry, graphic art, and minimalism. You guys also published a beautiful book to go along with it. It seemed like Marfa was the perfect setting for Finlay's work, although he was a Scottish gardener. Can you talk a little bit about the gallery space, and that show in particular?

Tim Johnson: Sure. Within the bookstore there's a fairly large gallery space where we present maybe six shows annually. And I would say, at this point, the exhibition of printed works by Ian Hamilton Finlay was our most ambitious. Finlay, who died in 2006, was such an inspiring person: poet, publisher, gardener, visual artist. And his work is, for me, deeply engaging and also, sometimes, quite troubling. Frankly, the work is somewhat difficult to describe. For example, he made "standing poems," "folding cards," artists books, concrete poetry, "poem prints," and a host of other kinds of work for which there is very little precedent in the literary world. The exhibition included examples of all this work. And, because we really wanted to demonstrate our respect for Finlay, we published a book, The Present Order: Writing on the Work of Ian Hamilton Finlay, which features new and newly-translated contributions by seven individuals, including Marjorie Perloff, Kenneth Goldsmith, and Stephen Scobie, a Canadian poet, friend of Finlay's, and the principle lender to our show. It's our first book, and we thought that Finlay would be the perfect subject, as he was really a principle practitioner in many of the fields that we find most interesting.

Joshua Edwards: Too bad Finlay himself wasn't around to see the show and visit Marfa. You do seem to have a constant stream of poets passing through there. Who are some recent readers?

Joshua Edwards: That's amazing. It's gotta be great for you, as a poet yourself, to have such a rich relationship to the community, and be in it without necessarily being of it.

Tim Johnson: It's nice to be out here on the periphery.

Joshua Edwards: It's interesting to me that much of your own work as a poet wouldn't fit into a book and doesn't really conform to the mainstream discourse of poetics. You've got sound poems, musical mash-ups, poems that depend on scale, sculpture that interrogates the idea of the book, collaborative works—all of which make inquiries into form in a very different sense than one sees on the open page. Maybe this is a leap, but this seems to be reflected in store, also.

Tim Johnson: Well, perhaps because it pertains to language, this will qualify as poetic. While arranging the shelves for the current configuration of the store, I decided that Cormac McCarthy's books would always appear in the same place. That is to say, regardless of where the alphabet would situate them, they will always appear at eye level, on one particular shelf. Other authors' names may appear before or after McCarthy's in the common order, but because of where we are, the popularity of his titles, and the laws of marketing, McCarthy has trumped the alphabet.

As to my own work, I suppose I'm somewhat restless. I'm often trying to elude my own presumptions about what a poem is or does, where it's found, the nature of its instantiation, and so forth. And I live among a lot of artists, so that has probably influenced me.

Joshua Edwards: So that people get a sense of the amazing books in the store, can you talk a little bit about what you've got in stock? I mean, you've got three different poetry sections!

As well as plenty of fiction and nonfiction, and a huge selection of art books.

I don't know the number, but we stock a lot of art books. We try to keep up with all the interesting contemporary work, but it's hard because often the artists are working in advance of their audience. One example that comes to mind is The Complete Poem by the Bernadette Corporation, which poets might find interesting. I certainly do. Also, Veneer Magazine, a serial artist book and magazine, is really interesting linguistically. And we stock that one.

Joshua Edwards:In closing, is there anything on the horizon that you're really excited about, either at the store or in Marfa?

Tim Johnson: Always. We'll be presenting new work by the really amazing artist Rosa Barba in March. We're talking with Cass McCombs and Laura Gibson about shows in January and February, respectively. We've been talking with Shabazz Palaces about a show for some time, which I sincerely hope will work out. Cinemarfa will have some special guests in 2012. I can't mention them now, but it should be great. Our friend Rob Weiner has assembled a local cast to present Wallace Shawn's version of Brecht's Three Penny Opera. We're working with the artist Marc Ganzglass on a language in art show that might not include any words. And, we're extremely excited about an exhibition that we're presenting by Robert Snowden and Scott Ponik that pertains to the political cartoons of Ad Reinhardt. And we never know who will be coming through town, so we remain open to other possibilities.