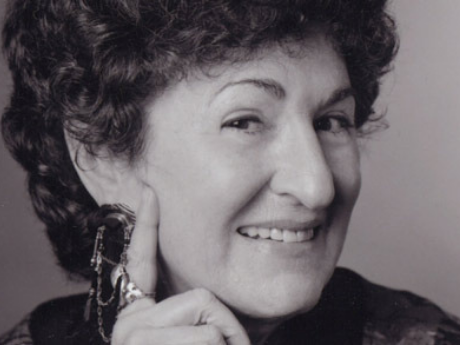 Dianne Bilyak: What was the role of organized religion in your childhood?

Chana Bloch: A first-generation American, the daughter of immigrants from tiny villages in Eastern Europe, I grew up in New York City with a strong sense of Jewish identity—kosher household, family Seders, synagogue on the High Holidays—and mixed messages about Jewish observance. Every Friday evening my mother would light the Shabbes candles, and my father would light his cigarette from the candles. My parents sent me to a secular Yiddish folkshul every day after school—not to Hebrew school, where the prayers were taught: Hebrew belonged to the men and the boys. Girls were second-class citizens; the Bat Mitzvah had not yet been invented. I was given to understand that my chief religious duty was to marry a nice Jewish boy.

CB: I consider myself a Jewish humanist; my grandparents, no doubt, would have called me an apikoyres, a heretic. Yet the habit of questioning that I learned early is not only sanctioned by Jewish tradition, it's an honored part of it. I believe that the quarrel with tradition is one of the most distinctive features of Judaism, and one of the most compelling.

Now that my sons are grown and I have remarried, formal observance plays a smaller role in my life. On Friday evenings I light the candles and bless the wine, a custom I love. At dinner time, my (non-Jewish) husband and I sing the blessing together over our (non-kosher) food: "Blessed art thou, O Lord our God, King of the Universe, who bringest forth bread from the earth." The Hebrew words are still resonant and meaningful to me, though not in the same way they were to my grandparents, and I don't address them to a divine dispenser of rewards and punishments who bringeth forth dinner only when we behave.

The Jewish world I inhabit is a verbal culture in which languages and texts are at the center. The principal text—in my teaching, my scholarly work, my translations from Yiddish and Hebrew, and my own poetry—has been the Bible. For many years I taught a course on the Bible at Mills College, presenting it as an anthology of works composed over more than a millennium. Does it contradict itself? Very well: it is large, it contains multitudes. What could be more unorthodox, more subversive, than the Book of Job, Ecclesiastes, or the Song of Songs? Yet these were included in the canon of Scripture. I am stirred by the biblical call for social justice, the vision of a transformed humanity; I can explain (without explaining away) the anthropocentrism, patriarchalism, and tribalism as vestiges of an earlier age.

My interest in the Bible was deepened by my scholarly work on George Herbert. I fell in love with Herbert's poetry in graduate school, drawn by its candor and seriousness, its sharp unsparing wit. Herbert and I made an unlikely pair—a Jewish girl from the Bronx and a devout seventeenth-century Anglican minister. He wrote as a Christian believer wrestling with his faith, but in essence he was writing about the conflicts of the inner life, and I could easily relate to that; I could follow him up to the point where he turned to Jesus for help. In Spelling the Word: George Herbert and the Bible, I tracked Herbert's poetic use of his sources; the ways in which he made the Bible verses speak with his own voice. Reading Herbert with Jewish eyes kept the scholar in me busy; meanwhile, I was happy to find in the poems of The Temple a do-it-yourself manual for the soul-wrestler and a model for the aspiring poet.

DB: In what ways, if any, did or does this influence your writing?

CB: My poetry has always been deeply engaged with the Bible. My first book, The Secrets of the Tribe, included a sequence of poems re-imagining tales from Genesis. Like Herbert, I discovered parallels to my life in the Bible—in this case the cautionary tales of family discord, which helped me make sense of my childhood. In the title poem of my latest book, Blood Honey, I allude to Samson "scooping sweetness from the belly of death / – honey from the lion's carcass" to suggest the relation of joy to pain. Recent poems—"The Revised Version," "Eden," "Chiaroscuro," "The Ark," "Babel" and others—return to the project of rewriting Genesis, now within a larger historical framework. Many poems question the biblical, and the subsequent rabbinic, obsession with separation (day from night, kosher from non-kosher, male from female). In "Hanalei Bay" I reach beyond these binary oppositions to imagine a time "before the dividing began,"a holistic mindset not based on exclusion. In "The Dark of Day" I can't help taking issue with the rabbis:

The rabbis taught us the mathematics of dividing
this from that. They certified
the micro-moment when day tips over
into night: When the third star presents itself in the sky.
They drew a line through that eye of light, a longitude.
You've got to navigate the evening blessing
with precision, not one star too soon.
But night comes on slowly.
It takes all day.

DB: Please tell me about your experience of translating The Song of Songs.

CB: Translating The Song of Songs was a wonderfully demanding and rewarding experience. The Song is one of the most enigmatic books in the Bible, in part because it has an unusually high proportion of rare words and constructions. Resolving the puzzles in the Hebrew fell to Ariel Bloch, my co-translator. Once the two of us had a reasonably clear sense of what the Hebrew was saying, it was my task to embody that reading—unexpurgated—in English that sounded like poetry.

Ariel and I felt that none of the English translations conveyed the rare combination of sensuousness and delicacy that makes the Hebrew so captivating. Just as earlier interpretations typically erred on the side of prudishness, contemporary translations (perhaps to atone for centuries of exegetical evasiveness) sometimes verge on crudeness. Seamus Heaney writes in his introduction to Beowulf: "It is one thing to find lexical meanings for the words . . . but it is quite another thing to find the tuning fork that will give you the note and pitch for the overall music of the work." Searching to find the proper register in English—neither too formal and stylized, nor too breezy and colloquial—took us through a carton of drafts. What kept us going was the desire to convey in English the erotic intensity and magical freshness of this great ancient poem.

DB: How have your many translations strengthened your own poetry and/or your belief systems?

CB: I was drawn to translation because I am a poet. As a young writer, in a workshop with Robert Lowell, I submitted, along with my own poems, some translations of the Yiddish poet Abraham Sutzkever. Lowell told me, "You can learn to write from your own translations." His suggestion proved to be the most helpful advice I ever received about writing. A translator needs to know at least one language very well: her own. You might say that translation is a form of apprenticeship—not to a master craftsman, but to the genius of the language itself. When you translate you are constantly choosing among alternatives in order to convey meaning, register, image, mood, music; each time you choose, you are strengthening muscles that you need in shaping your own work. It's a strenuous but efficient way of teaching yourself to write.

I learned Yiddish as a child, and began to study Hebrew in college and graduate school, and during two extended stays in Jerusalem. In my twenties I discovered that translation offered me a way of honoring the creativity in these two languages, more meaningful by far than the "nostalgia yiddishkayt" that often passes for "Jewish identity." Once I was involved in this work, I felt a responsibility to help save what might otherwise be lost, and to contribute something of substance to American-Jewish culture. Apart from The Song of Songs, I've translated Yiddish poems by Jacob Glatstein and Abraham Sutzkever, short stories by Isaac Bashevis Singer, and books of Hebrew poetry by Yehuda Amichai and Dahlia Ravikovitch. All these writers were steeped in the tradition, yet they did not hesitate to challenge it, sometimes in a radical fashion.

The first poem I attempted, Jacob Glatstein's "Smoke," published in 1946, is an indictment of the God that failed. The poem begins: "From the crematory flue / A Jew aspires to the Holy One," and it concludes: "God, wherever you may be, / There all of us are also not." In a sequence with the provocative title "Gods Change, Prayers are Here to Stay," Yehuda Amichai conceives of "a new theology" after Auschwitz:

Throughout his work, Amichai upends biblical texts, sometimes rejecting them unequivocally: "A man doesn't have time in his life / to have time for everything. / . . . Ecclesiastes / was wrong about that" ("A Man in His Life"). I would not have written as I do without the example of the Yiddish and Hebrew writers. They confirmed my belief that the questions are always larger than the answers.

* * *
Chana Bloch s a poet, translator, scholar and teacher. She is the author of four books of poems, six books of translation from Hebrew poetry ancient and contemporary and a critical study of George Herbert. Bloch is Professor Emerita of English Literature and Creative Writing at Mills College, where she taught for many years and directed the Creative Writing Program. She lives in Berkeley, California.

Dianne Bilyak has been nominated for a Pushcart Prize and her first book of poems,Against the Turning, will be released in September 2011. Through the Institute of Sacred Music at Yale Divinity School, she received a graduate degree in religion and literature. She has been interviewing poets for several years and editing the transcripts for inclusion in a manuscript called Poetic Faith. Please visit her website.