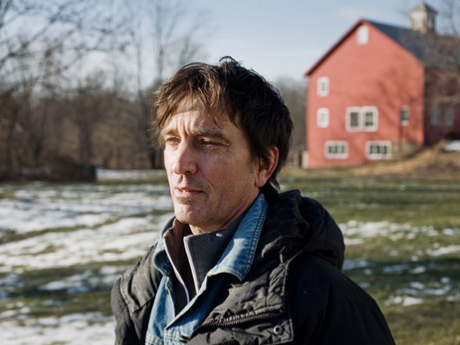 Dianne Bilyak: What role did organized religion play for you growing up?

Nick Flynn: I grew up in a town that was predominately Irish Catholic, yet I was raised Protestant, Congregationalist. I went to church until I decided I didn't want to go anymore, which was when I was about eight. I liked that we got new shoes on Easter, but being in the shadow of a dominant religion put me in the role of the outsider, which is probably best for an artist. I remember being somewhat in awe, and terrified, of Catholicism—the church in our town. I would sometimes sneak into it—it was so gothic, all stones and maroon drapes and incense and Jesus on the cross—we didn't have any of that in our plain white churches.

Dianne Bilyak: What role does it play now?

Nick Flynn: In my life now, not much. I prefer more democratically organized spiritual experiences, rather than hierarchical ones. I meditate, and sometimes do it with a group, which I guess is a type of organized religion, yet even in the midst of a dharma talk I never experience quite the same unease I've felt listening to a Catholic sermon—I think it has something to do with the knowledge that all the sermons come down from the Pope, which just seems wrong, not to allow each priest to craft a sermon to fit his (not her? still?) flock. Listening to myself, I seem to have all the resentment toward the Catholic Church as my friends who were raised Catholic, with very little of the benefits.

Dianne Bilyak: Are there ways that that particular religion (or lack thereof) has influenced your writing process or what you write?

Nick Flynn: Well, the art that has come out of religion is hard to beat. Where would we be without the Catholic Church? All those years of painting Jesus, you go to the Uffizi, start with the oldest painting, and you can trace every development of art over the centuries, you can see when representation gives way to perspective to symbolism to abstraction, until Jesus is simply a daub of red in the sky. I write about Jesus quite a lot, he's appeared in nearly every book I've written, it seems, I don't know why that is. When distilled down to his essence, I think he's a beautiful figure, which is sort of like poetry, language distilled down to its essence. I also like that he is a scrim for each generation to project upon—he seems the perfect ambiguous image, which forces us to figure out what he means, over and over again.

Dianne Bilyak: You sometimes refer to myths in your books. Do you relate more to Sisyphus or Prometheus? Do you feel, in your own writing practice, that you're pushing the boulder up the hill and having it roll back down each day or having the eagle eat your liver each day?

Nick Flynn: I don't really relate to either; I relate more to Proteus. I think it's interesting that everyone knows who Sisyphus or Prometheus are but less know who Proteus is. It's interesting which myths a culture takes into the collective imagination. Everyone sort of knows about the liver and the rock; Sisyphus is this existential dilemma now and Prometheus represents a proto-Christian statement about knowledge. But if you steal fire from the Gods and have your liver ripped out I'm not sure what that message tells kids. That's why Proteus is more compelling to me—I learned about him from Stanley Kunitz who said that he's the poet's mythological figure. Proteus is all about change and transforming and entering into your fear. He's about staying with your fear so that the thing you fear returns to its initial form so you can recognize it. You're not going to be able to see clearly until you recognize it. So that is much more interesting as a myth and it's strange that it's not more well known.

Dianne Bilyak: You have the word "poet" inside the word Proteus, which is interesting.

Nick Flynn: Look at that.

Dianne Bilyak: I play way too many word games.

Nick Flynn: Well he's about change and about the mutability of the individual—it's Whitman-esque, to have many selves, not just one tied to a rock, losing a liver eternally.

Dianne Bilyak: One of my favorite lines from a poem of yours is, "It's not one and it's also not two" and you said in the notes that it's the first Zen koan. Actually, there are many religious references in your work—Christian iconography, a story from the Qur'an, Buddhist references, Krishna makes a cameo, so you're really exploring all these religions in your own life and including them in your writing. I noticed in one poem you use the word "grace" and it's in all capital letters. Can you reflect on some times when grace or mercy have visited you?

Nick Flynn: Oh, God, I think they visit me daily. That's the thing—I'm not a big epiphany type of guy or into the catharsis moment. I really do believe that things all exist in our daily practice. Grace and mercy are such big terms and it seems like you get them twice in your life but I think they are all around us, I really do, and I think that the interactions we have with other people are filled with grace and with mercy and I think they are with us always. The hard part is when we're not able to see it and recognize it. I also think it's sort of ironic, you know, that boats are named "grace" or "perseverance" or "mercy." People take these large concepts and abstractions and believe it's somehow going to save them on the water. But no matter what you call it it can still end up being a boat where everyone went down. I'm not much for irony but I guess that's one of my more ironic observations.


* * *
Nick Flynn is the author of three books of poetry, Some Ether, Blind Huber, and The Captain Asks for a Show of Hands, and three memoirs, The Reenactments (released January 2013), The Ticking is the Bomb, and Another Bullshit Night in Suck City. He is also the author of a play, Alice Invents a Little Game and Alice Always Wins. His film credits include artistic collaborator and "field poet" on the film Darwin's Nightmare (nominated for an Academy Award for best feature documentary in 2006), as well as executive producer and artistic collaborator on Being Flynn, the film version of Another Bullshit Night in Suck City. He is also a professor in the creative writing program at the University of Houston.

Dianne Bilyak is the author of Against the Turning. Through the Institute of Sacred Music at Yale Divinity School, she received a graduate degree in religion and literature. She has been interviewing poets for several years and editing the transcripts for inclusion in a manuscript called Poetic Faith. In 2012 her play, Cradle to Gravy, was selected to be part of the United Solo Theater Festival in Manhattan. Please visit her website.