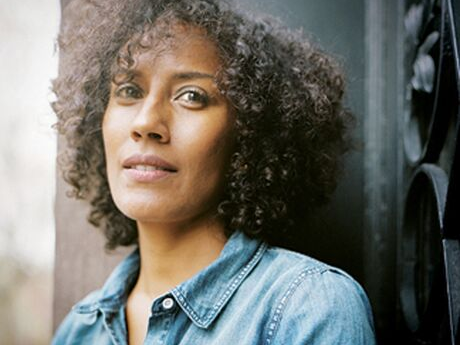 Snail, or, to a House

& if the blinds were drawn over the windows.
How does one hold
a whole live house
in a brain?

But there were bowls, & glass,
cereals in the pantry, cloves, folded
clothes.

Back then
the snails gathered at the water hose, their feelers
prodding alien in the dusky afternoon, summer of wasps
with their mud cities
hanging down.

The pots caught drops & drops of rain
while gardens grew for morning, out in back.

Our house, that house & nation of beams
all crossed with wooden light above the people,
I loved you.

& it is only love to see you
obese in this new city
following me on the train & at the job.

Forgive me then, I did not even look twice,
or good & hard like in a mirror.
I could not even know
that we were leaving.

The story goes: it was the best thing
to leave you & the king,
to have start-
ed
all over with
only those things

we carried on
our backs.

Poem reprinted from Teeth (Curbstone Press, 2007). All rights reserved. Reprinted with the permission of the author.

When the piece of a body is left (or a home is left) then the body begins being a constellation: one piece is there! one piece is there! If I leave my hair in the comb in my mother's house & walk out the door to go to the airport, then all of a sudden the body is everything between me & that lost piece. The body is made up, then, of roads & crickets & azucena & mud. How large we are. How ramshackle, how brilliant, how haphazardly & strangely rendered we are. Gloriously, fantastically mixed & monstered. I have been asking myself to be more attentive & porous--to pay attention to the way every inch of me is animal, every inch of me is earth. I am trying to remember this. Where is my cloud? Where is my sea? What do the lungs hunt? What does the eye have in common with the teeth?

So, yes, the process of writing poems always teaches me about the world, myself, relationships between things. Poem writing is learning. This, to me, is one of the major reasons why I write—why I love windows. I hope the poems are songs sometimes. I want the poems to ask questions. To engage other people. To promote compassion.

Recently, I was asked, "In what ways are your poems political?"

Is the practice of seeing political? Is the practice of meditating political? People have made it their duty to hurt other people. There have been successful & unsuccessful attempts to eradicate people on this earth. The dismemberment has been active. As long as we are living in a society or culture that says that it's okay for some people to have voices & others to not have voices, then speaking is a political act. As long as we are living in a society that promotes war, hate, fear--then, sadly, even love is made political. But I believe love is larger than politics--much larger, but as long as systems are trying to dismantle love--then, in this context, the poem for love, for liberation, for humanity becomes political--because political systems are institutionalizing or reiterating hatred. So, then, the poem protesting the killing of people inIraq, the poem protesting the brutal displacement of Palestinians, the poem envisioning better schools in our neighborhoods--these should be called common sense poems, I think. But these poems are made political because they are in direct response to political violations & systems that are against people.