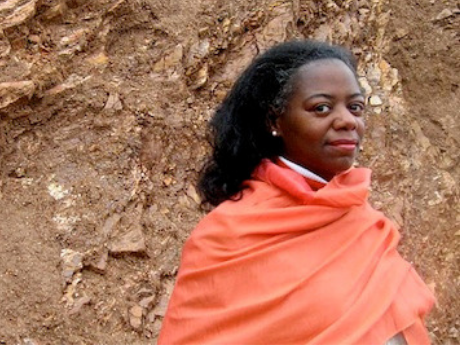 in a place beyond
sleep i was on the
ground in

the center of a
circle formed by
half-naked people

horns curved out
from the tops
of their heads

cowbells hung
from collars
around their necks

and cowbells too
where their hands
should've been.


From Ascension (Counterpath Press, 2011). Reprinted with the permission of the author. All rights reserved.

On the Poetry of giovanni singleton
Lyrae Van Clief-Stefanon

giovanni singleton lets silence do its work. She makes poems with something to offer besides the self: space itself. I am so interested in what she does with blank space. The poems are minimalist, while engaging a concern for the historical, the personal, the spiritual, as expanses. I hear Lucille Clifton— saying the human, the human— when I read this work. ascension is process. The buildup is slow, and culminates as play, in the clear space left as we literally watch an I disappear. Thereafter, we find the blank page again. And time to make another poem.

singleton divides the collection into five sections: "the odds," "ear of the behearer," "melanin suite," "eye of the be/holder," and "exodus." "the odds"—a grouping of concentric rings—is an echo, a ripple, a disappearance: eyes pulled towards the gap at the center of the process of reading, writing, prayer. Forty nine days in 2007—reflective, the poet notes, of "musician and Vedantic spiritual leader Alice Coltrane's transition through the bardo (the intermediate state between death and rebirth)"—provide the period for ascension's main section, "ear of the behearer." Partner and pianist for jazz legend John Coltrane, Alice (later Swamini Turiyasangitananda) Coltrane was sometimes blamed for her husband's turn towards the avant garde. Styled as a daybook, "ear of the behearer" does not treat Coltrane's biography as narrative. Instead, the poet's interest in the liminal resides with the Coltrane's interest in space. From the trochaic chanting of "Day 1," the cycle moves through meditations on composition. What makes a day? singleton writes:

As parts accumulate to parting, the push is towards movement: "way back to/ where every sound/ was a story and/ every silence/epic." Day 28, subtitled with I Ching hexagram 37: Chia Jen, is a recipe for chai. Other poems take up the silence of flower arrangements, or a single iris. Plays on eyes and seeing abound, sometimes with a dry humor. singleton has remarked on her desire to broaden the palette for African American poetry. The poem titled Day 43 begins:

i opened my eyes. i did. i found myself inside a watermelon.

My favorite variation on silence appears in Day 44:

a mother agrees
to look away

while her son tosses
a coin into the fountain

did you throw it in yet?
she asks impatiently.

water roars from
the lion's mouth

yeh. I been done dat.
the boy says.

having wished some
odd dream into being

I often find playing in the back of my mind the lyrics of "Row, Row, Row Your Boat", the last line of which is "Life is but a dream." What interests me are ways in which it might be possible to give "dream" and "reality" equal weight and measure. I'd like to see/think of them as being both plausible and implausible. I am reminded of the Lankavatara Sutra: "Things are not as they seem nor are they otherwise." This also challenges the dualistic relationship between dream and reality and creates an open field. Dreams can be useful even when not appended to Hope and Fear which again makes for a field that's open. I like that. A field, not of the cotton or tobacco variety, but one that is just as fertile and in need of cultivation. An ethereal quality can be useful for dealing with struggle and with its cessation.

So it is a big relief when in writing, as in prayer, a veil drops away and reveals the inter-connectedness that holds the universe together. For me, working on sustained poetic sequences allows this to happen. There is a removal of excess. Spaciousness is an amazing and borderless canvas, I think. Erasable too. Impermanence and the recognition of something greater than "I" are also the domain of dreams or of the ethereal. No real in unreal. No real in real either.

I enjoy the act of creation, of calling "the unseen", "the unknown" into being. I write in order to "trace echoes to their sources" as Lu Chi says in Wen Fu. The work, I feel, can bring a certain truth along with it. And it isn't always pleasant, reasonable, or even coherent to me. The essence of things is what matters. Liberation forever beckons as does magic, mystery, beauty. Trouble the water. I write because I believe that "to write is to make a thing so" as in Aboriginal paintings. The study and practice of Japanese and Tibetan languages and their respective calligraphies unite writing and breath for me—all being about gestures, physicality, visuality. Letters are wings, wings of butterflied words. Each line a pair of arms outstretched as invitation, making and shaping laboratory. Life is an experiment. Should writing be any different? I stop and I smell the rain coming and falling down.

In reciting poetry, I think often of the sounds of Lucille Clifton, Alice Coltrane, James Baldwin, James Brown, Clara Ward, Aretha Franklin, baptist preachers, Nina Simone, and buddhist teachers. Writing, working with language, makes the world, makes life for me more tolerable and more honest. This craft of "charging the word with energy" is an adventure. Hummingbirds, deer, wild turkeys, the dead mouse the cat dragged in tutor me. Mother nature knows what's true and what's possible. And I wonder, "What is the cost of fearlessness?" I am continually challenged to cast a wide net and to make good use of the catch. Birds flyin' high, you know how I feel. Sun in the sky you know how I feel. . .Yeah. What love.