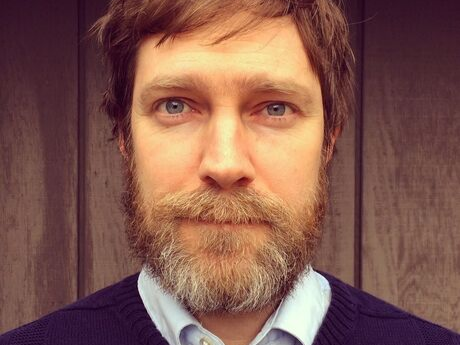 In a vending machine I see my reflection
alongside the sun's, and I watch these two
impervious flowers of being merge, transpose,
and dehisce, faces ghosted together on parallel
planes of glass, laughing over the foaming ocean.
To imagine the self as the sun or its warmth
is pleasurable, but something else is needed
to purge the urban smell from the dank
library of late morning. Walking along
the seawall, I feel waves and wind beating
against the island's rocks and shoulders,
I see citizens filled with sorrow that expands
as water orchestrates their slow effacement.
Just as I arrive home, two salesmen accost me.
They want to sell me my preternatural face.
They tell me that although time is running out,
I can still find happiness, romance, and eternity.
I reply that I believe in an impersonal life,
I'm hermetic, and my blood is on fire.

Introduction to the work of Joshua Edwards
Srikanth Reddy

"In a mirror I unearthed the birthmark / Of my century," writes Joshua Edwards in his remarkable literary debut, Campeche. Reflected in the textual mirror of the facing page, we find a black and white photograph of a capsized conifer – a weeping juniper? a witch's broom? – ripped from the ground by a wind storm, its root system's ramifying circuitry "unearthed" and exposed to our gaze like the "birthmark" of our tempestuous millennium. This is not ekphrasis, but, rather, something altogether more slanted, like the artfully skewed rhymes that cascade throughout the poet's work. ("Outside I stand, until otherwise proved / Under the impression I am not loved," writes Edwards at the conclusion of this lyric, revising the final couplet of Shakespeare's famous sonnet on the marriage of true minds). The poems and the photographs alternating throughout this collection do not reflect so much as they inflect, or, better, refract one another. Refraction, rather than reflection, is the translator's true art, and Edwards – an accomplished translator of Spanish-language poetry – displays his prismatic literary intelligence through a marvelous sequence of translations from Chinese poetry in this multifaceted collection as well. In his slanted ekphrases, his refractive translations, and his sly renegotiations of literary form, Edwards shows himself to be a masterful composer of dissonant harmonies and artfully misaligned seams.

Campeche is a collection of mirrors, yes, but it is also a book of storms. Prefaced by an epigraph from Lorca – "Mira al agua" – this volume tours the wreckage of the poet's native landscape (originally called "Campeche" by its first European settlers) in the aftermath of Hurricane Katrina and the attendant flooding in the region surrounding Galveston, Texas:

At last, I stand atop a public telephone booth, in the
small evening of a disappearing culture.
Up in the clouds, portent or part of the divine, I peck.
The damage is no longer a dream.

Like certain bird species of the American southwest, telephone booths themselves linger, precariously, on the brink of extinction in our cellular culture. This poet finds both refuge from the floodwaters of modernity and a literary podium for his poetic lamentation while perched on top of an endangered communications technology, singing his postdiluvian song of damage and disrepair. But Edwards' work never dwells for long on nostalgia for an idealized past. "The new market is being built here, / atop the old one," opens one poem: "Salvage is a major player. / It never stops." Campeche ultimately ventures a kind of literary salvage operation for an emerging epoch, sorting through the wreckage of collective life for new forms of aesthetic experience. At times the poet salvages beauty through the act of witness. Elsewhere, he recovers the aesthetic through acts of imaginative vandalism which are, nonetheless, tempered by a precision of lineation and form: "I broke one window after another until / the light was cut by an edge." Throughout, Edwards invites us to imagine new collectivities within the precincts of consciousness: "A crowd is gathering. / Your skull is their kingdom."

My mother's a librarian and my father's a photographer, and I was raised in a home full of books, art, and musical instruments. When we were kids, my sister danced, acted, and played several instruments, and I had no such talents so I read constantly and scribbled in notebooks. I didn't sense a life in poetry calling me though until a few months after I graduated from college, when I was working as a tollbooth-and-campground ranger at Mount Rainier National Park. I began to apply myself to writing with some sort of literary intent a few years earlier, when I was taking a break from college and needed a sense of purpose and a way to process my peripatetic existence, but at Rainier I got a feel for what life as a writer might be like and I couldn't imagine doing anything else. I'd order a dozen books at a time from Powell's—many of them discovered thanks to Rexroth's Classics Revisited and An Autobiographical Novel, others referenced in introductions or on back covers—and on my days off I'd take Whitman, Reverdy, Dickinson, or Patchen to a rock by the river. In the slow season I'd bring books and a typewriter into the booth with me, and sometimes I'd be able to work for hours without interruption. It was also at Rainier that I decided to start a literary journal (now a press), through which I met the four people who have taught me the most about poetry, Anthony Robinson, Robyn Schiff, Nick Twemlow, and my partner, Lynn Xu.

All this biographical info is a sort of poetics statement, I suppose, because essentially I write to process my surroundings, imagine language, and have conversations. My first book, Campeche, is explicit in these aims; it's a mythology of the islands where I grew up, Galveston and Clear Lake Shores, and a collaboration with my father—equal parts his photography and my poetry. I recently finished a manuscript called Imperial Nostalgias (a title stolen from Vallejo) that was mostly written in Mexico and China, and I'm not sure if the chicken or the egg came first, but many of my favorite poets are restless and move around constantly. I haven't lived in one place for more than two years straight since I was seventeen, and I identify closely with the poetics of gelassenheit, flux, and uncertainty that I see in a vague affiliation of wandering lyrical poets. So I guess that's my tradition, for now.