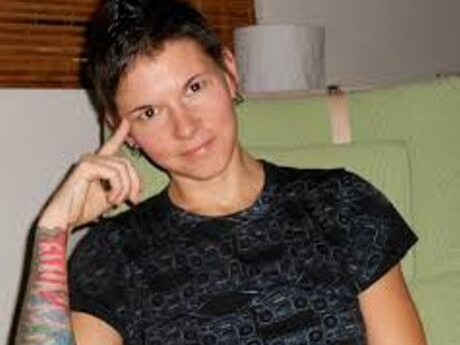 Afterwards They Photographed my Veteran Face, f/2 at 500

The aperture where pussyfooting messes with
My depth of field and fortitude – like o-
Ver-exposed lovers. Skeptical about my own
Fidelity to form, I forged a hon-
Ey of the symptoms held indigenous to prop-
Er honeys: prominence in cock and crock-
Ery. I douse this dish with glaze; it comes up lach-
Rymose and glassy-mouthed, with fractures on
The arms of both my honey and his vassals. I
Put the clay up on the wheel; I make a
Hole there. I was casting for our porcelain war when
Cupid hacked into my gallery, en-
Feebling the pedestals exulting all my earth-
Enware by glossing badly on my bisque and
Polishing the surfaces of haters. Plus our drill in-
Structor's footsore 'cause his foot's up on the
Kiln where he's been kindling the grilling cells with
Cinders of our difference. It's pretty tricky
Marching when your feet are fused to ovens. It's tough
To wax prosodic when your metric's del-
Iquescing. I douse this dish with glaze 'cause it an-
Neals and steels its scansion – not to mention
Waterlogging fixes mouths of jars that make my
Fill of honeys. I throw the clay up on
The wheel; I get the air out with some wedging. I
Think the Greeks persisted 'cause they threw down
Persian men with equal zeal, on Grecian vases.

My casting clay makes fractures in the shafts of Cupid's
Arrows – plus it bottlenecks the fauces
Of our flasks for better throating. But I was think-
Ing about sintering the powders of
Opponents when he came with porcelain face on like
A pestle at my dynasty of dish-
Es. So countrymen, you know my gimp, and get dis-
Memberment's what pitches longing onto
Cocks and itching pitchers. I throw these limbs into
The kiln; they make a mold there. When they is-
Sue from the heat I glaze my vases like the Greeks
Did, with these portraits of myself with mas-
Sive calves upon my camel as I'm bouncing out
To war and swapping teacups at sympos-
Ia for potters. Suspicious of our zeal for missing
Persons – and for form – I had invested
In this wheel to forge some hollows in these bodies
Made of clay accrued from battlefields. I've
Got these master foot maneuvers on the pedals
Of that wheel; I've got a master's thesis
On emoting on the skins of vassals. I throw my-
Self up on the clay; it gets the air out,
Makes an absence. I'm all like, "Okay, Cupid." Aft-
Erwards they photographed my barefoot face
At f-stops so your depth of pots is shallow. I
Take the wheel; I turn it back. I throw my
Clay upon the earth. It makes a cut like kinship does.

Introduction to the work of Lauren Shufran
Rebecca Wolff

I chose Inter Arma, a book of poems mostly in forms, to win the first ever Ottoline Prize from Fence Books because it is clever and dirty and political graffiti—on the subjects of homosexuality; the military; homosexuality in the military; and ducks. Ducks afloat and ducks getting stuffed. It is made with oppressive phrases that linger and jingoisms as well as buzz words and lingo. It's super-crazy smart like a dissertation but it's cunning like dessert, air-tight as a desert. If this sounds more like a blurb than a mini-essay it's because I selected this book from about 450 others to win a prize, and I published it this spring but I'm not sure anyone knows I did. Anyone who is teaching a course in Queer Lit or in Military Might or in Eros the Bitter Tweet should request a desk copy, and fast.

Typically the Ottoline Prize will be for a book of poems by a woman who has ALREADY published one or more books of poems, but Fence is nothing if not quizzical and so we bucked our own trend without ever having straddled it. This is a first book to end all first books. It's so accomplished it may as well have been written by an elderly, elderly, nay, a DYING poet, but believe me, the youth is all there, in spades. The youth is so deep it's digging. Young poets tend to navel-gaze: not this young poet. Her navel is too deep to see into. Young poets tend to follow trends: this young poet trumps the trends in favor of the trenches. Young poets tend to write sloppy poems. This poet is tight. I wish all books of poems could be written by Lauren Shufran.

The poetic project arises, for me, out of an impulse to interrogate: from a pressing set of questions or conditions, dis-eases or discontents that only poetry seems capable of touching all sides of. I mean I turn to it less for answers and more as a mode of circumnavigation that keeps to the skin of the thing. Poetry should pose impossible questions; then the project becomes the documentation of its failure to answer itself, and all that that failure reveals. The most exciting poetry for me is the work that questions what, exactly, the work is capable of. But I also begin every project with two standing assumptions: that poetry's success is that it is the ultimate mode of attention, and that, in Hugh Kenner's words, "forms remember." Form – its historico-socio-political consequence, its violence – will always be of paramount concern in my writing.

Inter Arma's questions began with one aspect of our cultural imaginary: I wanted to understand why it's so easy for us to conflate portrayals of, and discourses around, the terrorist and the homosexual. I spent a lot of time reading responses to 9-11, to Park51, to the repeal of DADT. I read studies on military hazing rituals; I went back to the Greeks: I read Carol Burke's wonderful and disturbing Camp All American, Hanoi Jane, and the High-and-Tight alongside Aristophanes. I wondered how all of this was an extension of the "Arma" of Ovid's Amores. I wondered about the relationship between breaking form and breaking step and the figure of the scapegoat. About force-feeding and reading; about the literary act that would be the equivalent of a hunger strike. About all the ways that poetic form might be an extension of all social relations.

A friend of mine had a painting teacher who once said to him, 'you can't paint a field once a tank has run through it.' I think about this, invariably, when I think about the importance of a poetics that willfully discards of the beautiful. I'm not sure what we could ask of the beautiful right now, after all we've taken from it; and this is an ongoing aesthetic question for me, as both a student of a Renaissance poetics that insists upon "delight" as one of poetry's primary functions, and as a human in the world with an innate inclination toward the pleasurable. Inter Arma is a work that tried to negotiate the violent – and parodic – site at which those two drives meet. It felt important that, as a work with these concerns, the poems have violence inflicted upon them as they were arriving into the world. Call it sympathy pains; call it a questioning of hierarchy in victim / criminal / witness relations. I discovered that sometimes it takes years to torture a poem until you're sure it's got nothing else to say – or that it never was, after all, withholding anything.

I haven't stopped thinking about the violence of language, about the violence of representation. How we are always only writing from the present-tense of self-incrimination. My current project comes out of work by philologists and scholars on the lyric such as the late, and inimitable, María Rosa Menocal. Inter Arma was interested in what we have to say (as misinformed as that saying is) about Islamic culture; this recent work wants to touch, instead, our muteness around it. I mean I want to recall our rejected indebtedness. Our indebtedness to Islamic culture is great, and one of those debts is, of course, poetic. So the book is thinking about credit and deficit and obligation, about hospitality and the gift; but also about the enormous problem that is History. Positive or corrective revisionism isn't immune either, and the work is trying – again, mostly, right now, by way of parody – to be pronouncedly aware of that. But I wonder what would it mean if we were to learn history – again, and all over again – solely through poetry, the generic and linguistic qualities of which would cause us to question the notions of 'fact' and 'truth' from the very first stanza.

Finally, I am trying, always, to write as though the difference so often posited between poetry and critical prose doesn't exist; I like to think we will eventually arrive at a place where we don't feel we have to move between the two, because there is only one writing. I can't imagine what the appeal is in holding the two apart enough that a writer would have to become an adept at transition. This desire for that fluidity is both generic and lived: the ongoing project of refusing the difference between writing and not-writing (where, really, most of the writing takes place), the difference between writing and living.