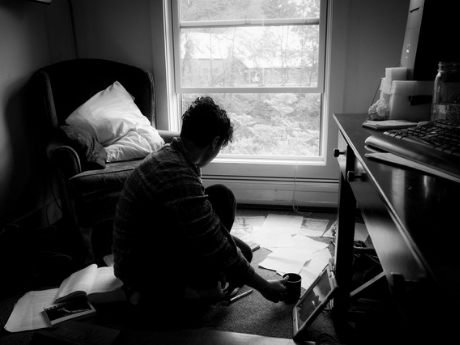 Introduction to the work
of Lillian-Yvonne Bertram

Sometimes language is a big moth bullying, or bewildered by, the porch light (it is hard to say). Science calls this "phototaxis"—an organism's automatic movement toward or away from light. In the case of moths, it's positive phototaxis: moths move toward light. Some theories suggest that the moon is a primary reference point for moths, and that a moth's attraction to a lightbulb or a fire might be related to Orientation and that when the moths arrive at said moon, this can lead to Disorientation. Poems, like moths, can be pulled or tricked by many "moons." But a Storm is Blowing From Paradise shows me this. It takes no body, no system, no orientation for granted—each poem working toward its own shape, direction, sight. The poems are meditative, explosive, difficult. Each one entirely and gorgeously taut with the struggle to discover through language, and to become itself. In this and other ways, the book becomes a physical engagement. The poems move us through and over the terrain of a wild and changing geographic and linguistic landscape. Through stanzas (rooms!) and space. At every turn, this book both builds and challenges form.

Bertram's sharp-eyed lines compelled by imagery and acutely funky diction are, so often, enlivened by a gorgeous enjambment that flings us into two orbits. A plural possibility is always threaded underneath the lines—you might call these poems of "or." "…clairvoyance/ or sorrow from self-undoing…" An "or" that resists the fixed position—which is an instinct I trust immensely in a collection that Claudia Rankine calls "an American portrait."

And over and over again happens the work of doing and undoing, creation and decreation. "It's how we got here.// Stars gobbling stars." Sound is "denatured." Bertram's mind is free here, unselfconsciously bucking language-segregation. Nintendo, unicorns, democracy, fractals, and elk. A fluency here. She reminds us that we are all governed by scientific laws—physics and biochemical processes. All cellular, ruled by light and distance. And the poems are, at once, filled with intimacy and idea. Distinctly bodied—awed, pained, alive, ticking.

These poems are paintings, lyrics, theories. I am taught by the destabilized eye/I and the way the poems model a kind of hungry and urgent, imaginative quest to learn! These are poems built by a joyful, active intellect. I've never felt so close to Saturn.

Darkness still here, hunkered against the trees.
Spring so uneasy this year.
No matter morning's boundary culling our bodies,
another romantic passage assaults us!
O limp future centered on this body!
In the model solar system, planets suspend & twirl
as if from a spider's whirl.
The quantum in backpedal, in decline, spring so ungripping
this year. Bored mouth. Bored fingers.
The umpteenth day/night running like such—
truly, truly—this troubling with physics!
Not still winter, not yet anything.

O thuggish awakening.
All planets but this one were named after gods.

I have had the blessing of standing in the desert beside the Colorado River, watching Jupiter and the moon rise together in that triumphant way that celestial bodies come into view; they rise into view outside of time yet right before your eyes—and what is time to the cosmos anyway? When the celestial rays strike me from a beyond that is too beyond for language to dent, I am neither of this world nor of the cosmos. This limbic tethering (the curse of consciousness?) is the feeling I've had for what feels like all time. This suspension, this pane of glass, comes with it an exhaustion that having no beginning can have no end. It is an unalterable state, a crypt so utter that language is a joke. And yet I try, again and again, to unhinge the door with words. Unhinge, or further entombment? Are there even words for what I must say—that I fail at all feelings but these? Is the poem the cellar, the crack permitting light, or the light?

Lillian-Yvonne Bertram
But A Storm is Blowing From Paradise (Red Hen Press, 2012)