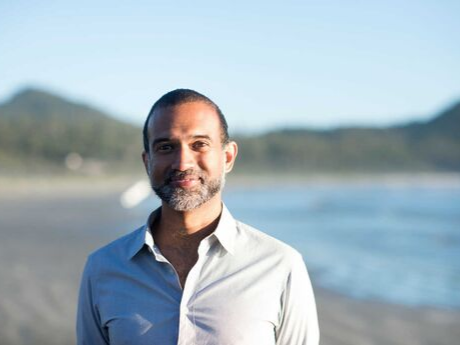 I am about to recite a psalm that I know. Before I begin, my expectation extends over the entire psalm. Once I have begun, the words I have said remove themselves from expectation & are now held in memory while those yet to be said remain waiting in expectation. The present is a word for only those words which I am now saying. As I speak, the present moves across the length of the psalm, which I mark for you with my finger in the psalm book. The psalm is written in India ink, the oldest ink known to mankind. Every ink is made up of a color & a vehicle. With India ink, the color is carbon & the vehicle, water. Life on our planet is also composed of carbon & water. In the history of ink, which is rapidly coming to an end, the ancient world turns from the use of India ink to adopt sepia. Sepia is made from the octopus, the squid & the cuttlefish. One curious property of the cuttlefish is that, once dead, its body begins to glow. This mild phosphorescence reaches its greatest intensity a few days after death, then ebbs away as the body decays. You can read by this light.


All Rights Reserved. Reprinted with the permission of the author.

Given the baroqueries of our postmodern era, I think there's something to be learned from the quiet clarity of a poem like George Herbert's "Death." As with so many other poems by this writer – "Life," "Love," "Man" – the title here is simplicity itself. Reduced to the obscure ontological status of a mere "thing" from the poem's first line, Death traditionally appears within our iconography as "nothing but bones," a bare skeletal frame which will, by the poem's end, come to life. For those of us who do not share Herbert's belief in the Resurrection, the poem may also be read as a parable of poesis itself, documenting the passage from lifeless "thing" to the lyric verb "sing" which completes the rhyme of the poem's first quatrain. (This regenerative parable can also be seen in the pattern of Herbert's stanza, which contracts to a two-stress line before being restored to the original, full-bodied pentameter). I can think of no more ferocious image for Death's challenge to poetry than the yawning corpse of "Thy mouth was open, but thou couldst not sing," and no redemption more exhilarating than Herbert's response to this challenge: "And all thy bones with beauty shall be clad." (And what tone could be more appropriate in taking such a terrible, simplifying force as one's subject?)

I don't mean to belabor the formal elements of the poem – though they are indeed worth our labor – but rather to remember the clarity and directness of Herbert's work here. A glance through any number of contemporary literary journals will show that we are collectively rejecting directness and honesty as poets today. Clarity and directness don't necessarily mean a retreat into personality. In the end I think you can be honest if you write in the first, second, third, or fourth person; it all depends upon what one is writing about. Whatever one's style or school or politics or idiom, it seems to me that the problem facing poets today is the unglamorous question of subject matter. (Our current literary pathology could ultimately be described as the trivialization of subject matter). Reading "Death," one could say, puts the "matter" back into this phrase.

Is this because we're tired of an outworn confessionalism in verse? That's perfectly fine, and I'm personally in sympathy with writers who feel slightly uneasy around the first-person – but note that the word "I" never appears in Herbert's address to Death.

Herbert was unafraid to title poems "Life" or "Death" because, for him, poetry itself was a matter of life or death. Each generation of poets has to find its own way of making these matters their own in as direct and honest a fashion as possible. For this labor, no doubt, future readers will thank them "when souls shall wear their new array."

Death, thou wast once an uncouth hideous thing,
Nothing but bones,
The sad effect of sadder groans:
Thy mouth was open, but thou couldst not sing.

For we considered thee as at some six
Or ten years hence,
After the loss of life and sense,
Flesh being turned to dust, and bones to sticks.

We looked on this side of thee, shooting short;
Where we did find
The shells of fledge souls left behind,
Dry dust, which sheds no tears, but may extort.

But since our Savior's death did put some blood
Into thy face,
Thou art grown fair and full of grace,
Much in request, much sought for as a good.

For we do now behold thee gay and glad,
As at Doomsday;
When souls shall wear their new array,
And all thy bones with beauty shall be clad.

Therefore we can go die as sleep, and trust
Half that we have
Unto an honest faithful grave;
Making our pillows either down, or dust.