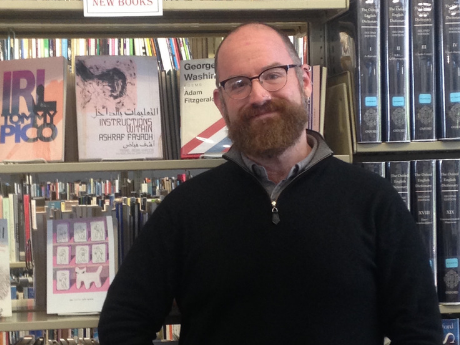 "There is no strict personal order//for my inheritance."

There are the nation and its laws and inside them there is the individual life, inextricable from historical context and community until the passage of time erases first context, then community—and finally even the individual name itself. There is the physical vastness of the United States and the corresponding millions of its citizenry, and then there is the fickleness and finitude of national memory, which finally is, after all, merely human. I think of the Antebellum graveyards far on the depopulated rural outskirts of my Southern childhood, all the effaced names, gravestones gone crooked or toppled into overgrown and abandoned grasses thick with crickets—I think of the people whose ancestors lay there, roots and branches both long since dispersed into the aftermath of incivility.

Perhaps the contingent nature of the original Puritan experiment lingers on in our anxieties about continuity and tradition, about remembrance and abandonment, success and failure—though perhaps if as a culture we've inherited nothing else, we've inherited the ability to make do with where it is we find ourselves. I think of the recurrent national desire to stake a claim and build a structure there, to plant crops while there's time and light enough, to reap our share of harvest before we lie down in the long winter we've stored our heat against. But with the desire to stake a claim and make it last has come the desire to defend that claim against forces more immediate, more ideological than mortality—I mean that I write this on March 12th, 2010, just eight days shy of seven continuous years of war.

Perhaps the peculiar shaping forces shared by poetry written in the United States are the tensions and antagonisms crucial to the Puritan experiment as well as the generations of indigenous people who were witness to the first incursions. Perhaps all of our poetries have been torn between the ideal and the actual, Old World and New, freedom and law, the individual's desires and the survival of the whole, gift and capital, land and land use, the colonial narrative of a God-given mission and the long histories of indigenous populations. It is hard not to think of our national identity as "split at the root" many times over—even before the slave trade found harbor here.

I'd argue that my parents thought of themselves as Catholic first—citizens of the United States second. Both sets of my great-grandparents were born in Europe, and while my father grew up in the immigrant neighborhoods of New Rochelle, NY my mother was raised in a German-Catholic community in Indiana. But their marriage was nomadic; I was born and grew up in the South and therefore developed a more specifically regional identity than my parents had, and yet they passed on to me the imperative that a relationship to God remain primary. I actively and ambivalently thought of myself as Catholic long before I actively and ambivalently thought of myself as Southern or as being a United States citizen. This active ambivalence has informed my coming out as a gay man and likewise my residence in the San Francisco Bay Area for a decade—but it is perhaps a spiritual tradition that I would both claim and critique first, before my other allegiances. Perhaps a quality I share with the Puritans who are nonetheless only figurative ancestors for so many of us who live here.

To claim a tradition and to critique it–perhaps even to suggest that in claiming a tradition one must critique it—is that ambivalence unique to writers of the U.S.? I think of Susan Howe's argument in The Birth-mark: unsettling the wilderness in American literary history, that, "The antinomian controversy was the primordial struggle of North American literary expression" during the "turbulent infancy" of the Massachusetts Bay Colony, a time especially "charged with particular risks for women" such as Anne Hutchinson, who dared to both claim and critique the religious laws of the Puritan fathers. "I know this," writes Howe, "and go on searching for some trace of love's infolding through all the paper in all the libraries I come to."

And I think of Phillis Wheatley, whose 1767 poem "An Address to the Deist" begins: "Must Ethiopians be employ'd for you?/Much I rejoice if any good I do." How surprising to keep reading and discover Wheatley preaching the finer points of Trinitarian theology! If from this historical distance the first line reads as a remarkable instance of signifying—especially the verb "employ'd"—the entire poem in its sincerity garners a strange ethos from Wheatley's simultaneous position as slave, Christian convert and theologian. It ends thus:

Ah! Wondrous destiny his life he laid
"Father forgive them," thus the Saviour pray'd
Nail'd was king Jesus on the cross for us
For our transgressions he sustain'd the curse.

Given a more recent poem like Langston Hughes' "Christ in Alabama," it's hard for me not to read into Wheatley's poem an unintended yet implicit, heavily ironic link between Christ and slave. In fact, it's one of the salient qualities of poetry in the U.S. that precedent and antecedent poets hold impossible conversations across centuries—a kinship as often affectionate as it is uneasy. If in Wheatley's poem the Christian slave is "employ'd" in the service of saving the soul of a white non-Christian, in Hughes' poem "Christ is a nigger,/Beaten and black" (emphasis mine). Each time I read it, it seems to me that Hughes' poem is a direct response to Wheatley's—even though I know it's the then-socialist Hughes' deliberately inflammatory critique of the role Christianity has played in the political lives of African Americans. It ends thus:

Most holy bastard
Of the bleeding mouth,
Nigger Christ
On the cross
Of the South.

It is a strange fact that the poem, long after the author is dust to history, serves not only as representative of the individual life, but becomes also a representative of its nation. It reminds us that citizenship is metonymy at its most radical—and, at times, its most dangerously reductive. And it is perhaps one of the strongest pressures attending the vocation of poetry within the United States—to be "representative." If not representative of a particular community (whether it be aesthetic, racial, ethnic, class, sexual and/or gendered), then of oneself as a kind of "American Individualist." It's as though a poet must be Langston Hughes, and if not Langston, then Robinson Jeffers—a joiner or a loner.

But what about the citizen-poet who is less a loner than a dissident? If I worry about anything concerning poetry being written within the United States today, it is how radically reductive "representative" writing is asked to be. I also worry about the attendant conflation of market value and representation—that young poets are being told that "success" lies only in presenting to the reader the quality of being recognizably "representative." Dissatisfied, ambivalent, and critical, I've come to be interested in the fact that, as Brenda Hillman writes in Loose Sugar, "'subject matter' stays with us even after we have punched a hole in about." In the case of my own work, the "hole in about" is as much a critique of the traditions and subject matter to which I lay claim as it is my own personal dissatisfaction with democratic process.

Writing in the United States, a poet reserves the right to claim and to critique—much in the way that Emerson's Transcendentalism depended upon the very Christianity whose King it deposed. Which is to say that even as I identify with certain traditions of poetry in the U.S., I tend to want to counter those identifications with a resistance to being representative. It is a trait I share with my late friend Reginald Shepherd, who sharply articulates this mode of poet-citizenship in "Angel of Interruptions": "No representation without taxation, he said, burning the dollar bills." Perhaps this is a gesture peculiar to democracy. Perhaps this is merely ambivalence about political power in the democratic state, given that we in the U. S. continually elect "representatives" who misuse, abuse and debase public trust. Or perhaps it is a gesture most common to those citizens whose needs and rights have historically been neglected—if not actively negated. It's worth considering that the end result of neglect and negation is as often citizens' anger as it is their courage, the will to stand up and to say I am that but I am not only that. When I stand alongside others in saying I am not only that, I mean it not as evasion of collective responsibility or as an expression of shame, but rather as an assertion of individual and communal complexity, as an opening onto possibilities better than the ones we've been offered.

I came of age as a poet in the United States after Anne Bradstreet but before Kenny Goldsmith—the difficult passage when both L=A=N=G=U=A=G=E Poetry and the poetics of identity politics challenged the long ascendancy of the Confessional legacy and New Critical reading practices within the academy. In those years I learned as much from browsing the stacks as I did from witnessing the academic fracas. When I looked up and out from the desks and libraries where I spent the '90s, it seemed everyone was duking it out for supremacy and legitimacy, and if the institutional terms of the struggle seemed petty to me, the stakes did not, given that I had yet to claim my own tradition.

It might have taken me more than a decade of reading and writing, but eventually I fashioned a poetics in the companionable shadows of feminism and Modernism, just beyond Gay Liberation and the Confessional, where the San Francisco Renaissance meets ecopoetics. And if yesterday I wrote in a field whose four corners are Robert Duncan, Lorine Niedecker, Myung Mi Kim and Jean Valentine, today they might be Robin Blaser, Mei-mei Berssenbrugge, Adrienne Rich and H.D., just as tomorrow they might be Alice Notley, Edward Taylor, Frank Bidart, and Nathaniel Mackey. I repeat: There is no strict personal order//to my inheritance.

In the end I think of Charles Olson, whose Maximus always comes "back to the geography of it,/the land," both the literal facticity of it and our records of its history. It was Maximus who in "Letter 27 [withheld]" argues that "An American//is a complex of occasions,//themselves a geometry//of spatial nature." Which is another way of saying that, perhaps because the country is still so young, its size so vast and the democratic project still so tragically incomplete, the poetry of the U.S. is peculiarly simultaneous, the work of our precedent poets as urgent as that of our newest authors. In the end, I agree with Olson that the poetry of the U.S. "is no bare incoming/no novel abstract form,"

It is the imposing
of all those antecedent predecessions, the precessions

of me, the generation of those facts
which are my words, it is coming

from all that I no longer am, yet am,
the slow westward motion of

more than I am