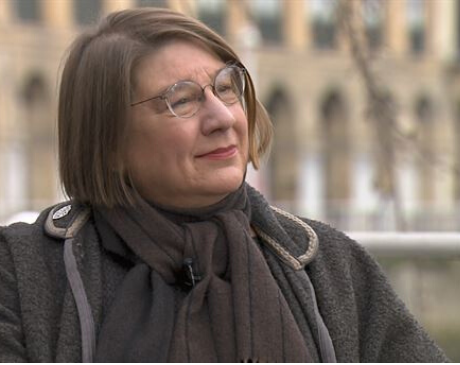 "In a time of war language always dwindles, vocabulary is lost; and we live in a century of war." That was written three–quarters of the way through it, in the United States (by Madeleine L'Engle); and you can spend hours contemplating the accuracy of the statement: Even though no war on U.S. terrain has been universally acknowledged in this century, we've participated in and/or received the backflow from every other war. If not "war," "hostilities" could certainly be truthful for the internal "wars" (drugs, crime, race, gender...).

In the questions, what struck me was the strangeness of the collective noun "American poetry": each individual part of the collectivity—each poet— being so completely different, because of the history, from each of the rest. Even if American poetry were considered to be written only in English, say, there might be no agreement in or on that language, either, because of the history. And yet there are American poems. (They nail it.) The only commonality I can think of is that each poet here is making a stopgap. Even those poets who look to follow a tradition or strict constraints or a pattern can't help themselves or keep from doing it. And each stopgap looks entirely different.

Just so as to be sure not to mistake the lack of agreement for a tragedy, poetry is almost the only thing in American life today that is so diverse, and by definition: still not forcibly grouped (by tribalism or by demographic), in its original impulses. While "American in the questions didn't mean "of the Americas" but clearly meant "of the United States," it's interesting to think that for a long time, from the outset, people have seen the U.S. as a kind of test case— odd enough to be vivid, an exemplar of something, whether of the Declaration of Independence or of Ford Motor Company policy. Maybe something like that could be thought to be at work here. Ninety–nine percent of the issues— scatteration, change with wars, definition of language, diversity against coercion— also apply to at least the whole hemisphere.

Then, here comes the famous American longing for commonality— at bad moments for witch–burning unanimity. Although, if what is American is not commonality but the longing for it— like each longing for an identifiable–but–communal nation with an undamaged language— the scatteration could turn out to be a point of agreement. It is a fact that the country was set up to expect disagreement— or, as Fitzgerald put it, "to hold two [or more?] opposed ideas in the mind at the same time, and still retain the ability to function.