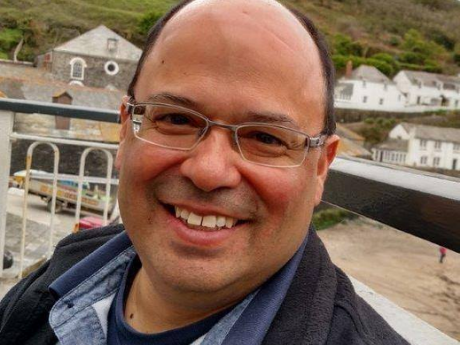 In what ways do you consider yourself an American poet?

When I read this question—before considering how I might answer it—I thought about how two poets I love might have responded: Denise Levertov and Thom Gunn. Both were born and spent the first twenty or so years of their lives in England where they got their start in poetry, including their first books. Yet who today would call Levertov an "English" poet? And my sense is that English critics stopped claiming Gunn as a true English poet from the time of My Sad Captains (1961) and on. In an interview with Jim Powell, Gunn referred to himself as an "Anglo American" poet. So one conclusion I came to, with regard to this question, is that a poet's "American-ness," or lack thereof, has largely to do with which poets he/she has read deeply and allowed him/herself to be influenced by. In both Levertov's and Gunn's case, one of the poets that really opened things up for them was William Carlos Williams. And of course, the many years they resided in the United States could only have enhanced the American side of their sensibilities.

While I was exposed to Walt Whitman and Emily Dickinson in high school (1980-1984), it was in the latter half of the 1980s that I began to explore poetry with any degree of seriousness—while a student at UC Berkeley. Who was I reading? For starters, the poets on campus I studied with: Ishmael Reed, Gary Soto, Robert Pinsky, Thom Gunn, and Peter Dale Scott, who considered himself a Canadian poet. And who were some of the living poets these teachers led me to? Victor Hernández Cruz, Ernesto Trejo, Frank Bidart, Louise Glück, Robert Hass, Robert Duncan, Michael Palmer, Jorie Grahm, Sharon Olds, August Kleinzahler, and Lorna Dee Cervantes, for starters. A mixed bag to be sure. I drank the "poetry kool aid," if you will, with these authors, and that is what planted the seed of what I'll call my "American poet-ness."

Luckily, there have been and are multiple venues for poetry in this country. I am not intimately familiar with the publishing traditions of other countries so it would be unfair to assume that what I'm about to describe is particularly American, but one of the things I've always been enamored with about the American scene, as I have experienced it and studied it, is the vital role small press publishing has played. On the one hand you have gestures like the Objectivist Press giving us the early works of that co-hort in the early part of the 20th century; you have James Laughlin with New Directions giving us some of the major figures in 20th century American poetry; you have City Lights Books and White Rabbit Press giving us Allen Ginsberg and Jack Spicer in the late 50s and early 60s; you have Sandy Taylor at Curbstone forging a particular and laudable publishing mission; you have the first and second wave (late 70s; late 90s) of Gary Soto's Chicano Chapbook Series giving us early samplings of Sandra Cisnero, Alberto Ríos, and Jimmy Santiago Baca on the one hand, and then later the first poems of Rigoberto González on the other; you have, in 1966, Victor Hernández Cruz mimeographing by hand on the Lower East Side of Manhattan, Papo Got His Gun; and I'm modestly pleased to say that Momotombo Press, which I launched ten years ago, helped bring first light to poets like Brenda Cárdenas, Paul Martínez Pompa, Maria Melendez and Kevin A. González.

In other words, the trenches of American poetry somehow always find a way to give voice to the full breadth of American poetry. I would include the fervent small press activity surrounding the Language School during its beginnings, as well. I have never looked to mainstream poetry venues, or what Charles Bernstein used to call "Official Verse Culture," for a democratic snapshot of American poetry at any point in time. Can you imagine if our only lens for glimpsing American poetry, say, in the last 60 years, were the New Yorker and the trade houses in New York?!

Earlier I mentioned William Carlos Williams. So certainly, from my perspective, I can't imagine American poetry without him. But I would also add the expatriate experiences of Ezra Pound, Gertrude Stein, and T.S. Eliot as a vital part of our tradition.

Although I got my first shot in the arm in the San Francisco/Bay Area in the mid 1980s, my next significant dose was in Europe when I lived in Spain ten years. In other words, I like to consider myself part of that tradition where poets not only from the United States, but poets from the Americas, were enriched and educated by their experience of living, writing and, in my case, translating in Europe. I feel a particular kinship with Rubén Darío, César Vallejo and Vicente Huidobro, who spent formative years in Spain and France and were influenced by the work they encountered there. Spain afforded me the opportunity to become closely acquainted with the poetry of Lorca's generation. But my time there also, for example, exposed me to the post-war generation of Spanish poets called the generation of '50—above all, the poetry of Jaime Gil de Biedma (1929 – 1990). The curious thing about Gil de Biedma is that he himself was a consummate anglophile, discovering the work of Eliot and Auden while a student at Oxford. His readings in French were also a big influence, just as they were for Darío and his encounter with symbolism. Gil de Biedma was also influenced by extended stays in Manila, so he himself also had the expat experience.

He once answered the question, "How would you characterize your work?" by saying: "My work is about the passage of time, and me." When asked how he would compare his work with that of his co-horts, he responded, simply, "It's briefer." In other words, he was not prolific. But he was a consummate craftsman and his candor, including not hiding his homosexuality, influenced a whole generation of Spanish poets that followed. Reading and re-reading him when I did allowed me to embrace, without apology, the first person lyric as one strand of our American tradition. City Lights Books came out with a bilingual volume of his Selected Poems in 1993, called Longing, translated by James Nolan.

The American poetries that are flourishing are so diverse both in subject matter and form—from Billy Collins to David Antin; from Multilingual poetry to poetry in Spanish; from conceptual poetry to Flarf—that perhaps what's formally distinctive about American poetry is its formlessness.

At the risk of over-generalizing, my sense is that American poetry, where popular culture is concerned, is a poetry of freedom and permission—that there are certainly poets who embrace it and have enjoyed success, from a publishing perspective, in embracing it. I'm thinking of, say, Rane Arroyo's Ricky Martin; Denise Duhamel's Barbie; Joe Wenderoth's Letters from Wendy's. I'm thinking of a wonderful young poet named Jacob Saenz, who has been writing great poems about zombies.

I once wrote and published a brief essay titled "From Alurista to Zukofsky" in which I alluded to the aesthetic diversity I was exposed to in the San Francisco/Bay Area. If I add to that experience my ten years abroad, and the fact that I can read and write in a second language, I would say that the tradition I embrace is more cosmopolitan than not, and so would include non-American poets—not surprisingly, poets who write in Spanish mostly. But during my years in Spain, I was particularly interested in, and read poets from, the French avant-garde traditions in the early 20th century, above all, Apollinaire, who I absolutely love.

My predictions are that with the advent of new media, the ways poetry reaches us will be diversified—from YouTube videos of readings one may not have been able to experience in person to the poetry apps that now exist for hand held devices like the iPhone. But I also think that because there are those of us who still like holding a book in our hands, poetry in print is not in any danger. Poetry in print will be dominated by print-on-demand technologies and micro presses who design nicely designed units. These kinds of delivery devices—new media and small press publishing—will never leave us. Off set books like the ones produced by the big trade houses? That's anyone's guess.

The other thing I would say is that as the gate keepers—or perhaps I should say IF the gate keepers—in the poetry world become more diverse, both aesthetically and otherwise, the kinds of poetry that will make their way into more mainstream venues will also diversify. So that you'll have organizations like PSA, the Poetry Foundation and, even, the New Yorker, take steps, however small and gradual, to discover the true breadth of American poetry.