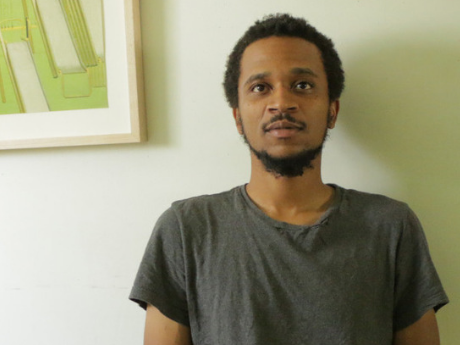 There was, at one time, much earlier in the twentieth century, when it could be said there was a distinctly American poetry. It is my belief that with the passing of time and with the influence of natural and unnatural forces (globalization) the only barrier that remains is that of language and the shallow details of local customs.

I cannot think of one essay concerned with the history and future of American poetry that did not mention Walt Whitman and I thought often, as I was writing this, of how I might include some lines from "Song of Myself" to show the bravado that was a particular American characteristic of that time and that, of course, greatly influenced many future versions of this same tune, of what it means to be here now.

I go into a Barnes and Noble and I go into the fiction section and there is a sub-section in the middle called "African-American Literature." I think about what makes these stories and novels and poems particularly African-American as opposed to not simply American. I think about Sarah Palin talking about "real Americans." I end up buying a present for my friend Kate Wolf and leave the store without purchasing any literature, African-American or otherwise.

I consider myself an American poet only by virtue of my having been born in Detroit. I think of myself first as an American, then as an African-American who makes art. I make work that wouldn't necessarily be classified as African-American art and yet still find race inescapable as supposed subject matter and talking point in discussions on art. As much as I would prefer to deny the existence of a distinctly American poetry, the problem—the particular American problem of race—as it relates to the content of the writing (or any art form for that matter) is indisputably necessary in our understanding of the work of African Americans who make art. The same can be said for every subset of the population. While we can (and should) celebrate these differences, we must remember also that, at least in the realm of literature, there is a narrative— perpetually in motion—of works in conversation with each other. The differences between the various experiences of American citizens are then, as ever, useful in understanding the work, though perhaps not as useful as the similarities. The same may be said for American poetry as a whole in its relation to the rest of the world.

In 2009, in the company of only my closest peers and in an admittedly over-dramatic fashion, I declared I was finished writing poems for the page. From then on I would write poems for performance, poems that would serve as both subtitles and couplets for photographs, films and video. This was not because I didn't think the poem in book form was still a rich canvas, but rather had more to do with the limitations of the conversations occurring in the poetry community. But I'm getting ahead of myself.

I've been writing poems since eighth grade, from about the time my (soon-to-be) favorite teacher, Mr. LaMore, visited my middle school and told us about a new writing program at the local arts high school. By the end of high school I was more interested in making movies and throughout college I took more classes in visual art than literature, but poetry remained (as it will remain, again, in spite of what I am saying) a constant. By the end of college, even as I knew I wanted to write novels and continue making visual art, I actually entered an MFA program for poetry. At the time it seemed to make sense, to study writing at the level of the line (as if you can't do this as a fiction MFA student). But I was always more interested in making art and writing (and, to be perfectly frank, reading) novels. I liked my classmates but definitely felt more kinship with the students at the art school down the hill, even as they ignored me, perhaps sensing the bad decision I'd made in choosing which type of MFA program (writing school or art school) to attend. All the while I kept thinking about Carl Andre. Before moving to (my current home in) New York City, I had lived in Austin, Texas and at one point visited Marfa. In Marfa, home to the hotel in "Giant," and, oddly enough, really, really good pizza, I visited the Chinati Foundation. Founded by (minimalist-great) Donald Judd, Chinati is an art space on the site of a former army base in the middle of the desert, on the outskirts of a town of about 2000 residents. The Judd works are great as are the Roni Horn's and John Wesley's. By the end of the day, however, I could only think of Carl Andre. Each of the 12 or so artists is given a permanent space for a permanent work or series of works. Andre's room is filled with a long table/podium upon which sit the craziest typewritten poems I'd ever read. Stuff like the word "sulfur" over and over again. The typical reaction to minimalism is, undoubtedly, "well, huh," or something like that. Or you just let it wash over you. Or you give an educated response because you've educated yourself about minimalism. But there is, unlike the reaction to certain kinds of poetry, none of the usual scoffing at just how crazy such and such work is. Or how staid and boring such and such a work is.

When visiting museums, I still occasionally hear people decrying certain artists and just how easy it is to, say, fill a giant tank with water and a shark and formaldehyde. But people (for the most part) don't talk about how a certain kind of work is destroying the art world. And as messed up as the art world/art market is, there seems to be a certain freedom that artists have that poets and (to a certain extent) fiction writers just don't have. The art market certainly dictates a lot of what is produced but there seems to be a lot more room for weird stuff to happen without people getting all bent out of shape about, say, a particular type of performance ruining things for everyone else. I'm generalizing here, obviously, but if you go to openings, as I go to openings, with the poetry model in mind, you will more than likely find yourself consistently amazed at how easy it is (at least for most of those around you) to go from a figurative painting show to naked women in high heels standing around to 24 hour video loops without batting an eyelash. After visiting Marfa and thinking about my own poems and the poems I wanted to make down the line, it suddenly made a lot more sense to place said poems in a gallery/museum context. For here even the wildest kind of texts were just part of the script. Plus the art people liked throwing actual parties where people actually danced. As opposed to, you know, standing around and talking about LaMonte Young. Or something like that.

I believe in poetry as much as I believe in any art. By which I mean, I believe in art's ability to move people in all manner of ways. And to make people look at things differently. And so on and so forth. But I don't know that we are, writers and readers and teachers of poetry, doing enough to ensure that the form will continue to live on as fruitfully as it has. Something has to give. Otherwise we risk—and I am certainly not the first person to say this—the world of poetry being limited to the small circle of degree programs, small presses and National Poetry Month. The conversation has to extend to how we teach poetry. We have to train readers to not fear the difficulty of experimental form or the symbolism of a concrete subject just because it happens to be in stanzas. We have to get them to the point where they say "my kid could do that" because they understand that certain kinds of writing makes use of formal gestures to deal with the materiality of language. We have to make them understand that, though they are used to relying on a beginning middle and end in a text, the freedom of the more open, non-linear field is one of the primary assets, among so very many, of poetry as it is in art as it is in everything.