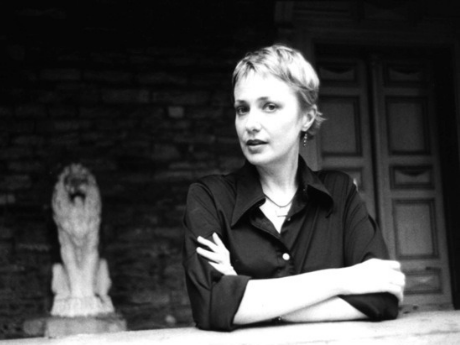 I'd like to answer these two together, as I feel question 2 informs question 1 rather nicely . . .

Felicitously, I'm teaching a class called "Essential American Poetry" right now. And as the semester begins we're looking at the earliest appearances of "American" poetry—Anne Bradstreet and Phillis Wheatley, specifically—in the 17th and 18th centuries. Bradstreet and Wheatley both came to America from somewhere else, Bradstreet as a "free" person, Wheatley as a slave. (I use "free" in quotes because as a woman Bradstreet's was a relative kind of "free.") It seems to me that these two might form the gateway through which American poetry enters world culture: issues of choice and possibility—ideas which continue to live and breathe in this country's identity—occur simultaneously with issues of horror and violence in their work. In Baudelaire's poem "The Little Old Women," he uses the phrase "all things, even horror, turn to grace." I think American poetry, past and present, has been concerned with the transformation of horror into grace: the American Imagists, the Harlem Renaissance poets, the Confessionals, the Beats, the Slam poets . . . all looked unflinchingly at what was before them, and made beauty out of it. So, I think the idea of the gaze that doesn't back down from horror (because in that horror grace is found) is very American.

I consider myself an American poet because my predecessors (both genetic and poetic) came from places other than America, had little or no formal education, but believed in choice and possibility. And I've tried to make beauty out of some horrible things that have presented themselves to me. It may not be everyone's beauty, but it's my kind of beauty. And that's very American!

All of the above.

I think the energy with which American poets confront / question / engage / reference, and then decide to either utilize or abandon form is distinctive. There is always an accommodation for form, it seems: like the poet's own awareness of form is standing outside the poem, watching the shaping as it takes place. Is form is still "never more than an extension of content"? Yes, I think so. Probably it's never been more so.


What significance does popular culture possess in your sense of American poetry?

Personally, as a flarf collective poet, I am always dealing in popular culture. The flarf collective puts phrases into Google, makes poems out of the phrases, and then emails the poems around to the members of the listserv. Lines from the emailed poems are then reworked into new poems, and sent around again for further recombining. Funny, vulgar, non-"poetic" language gets run up against "beautiful" words. In doing this, a certain amount of control (i.e., ego) gets surrendered, allowing the word-image to come under the influence of chance. Who knows who speaks through those poems? In my own poems it's often characters I don't necessarily like, that's for sure. Sometimes it feels like it's the actual collective voice of popular culture coming through. One of the poets, for example, Drew Gardner, wrote a flarf poem called "Chicks Dig War." I'm pretty certain Drew himself doesn't dig war (and I'm absolutely certain he's not a chick), but there is a presence in that poem that is half his own, half someone/something else, that has been allowed to speak. As Rimbaud noted, "I is an other," and that "other" is flagrantly present in flarf poetry.

I think Rimbaud, actually. For my own work and for distinctly American poetries. His "lettre du voyant" of 1871 suggests a program for "modernizing" poetry that goes way beyond the disorganization of the senses. He says several things that echo in American poetry, especially now:

*** "Poetry will no longer give rhythm to action; it will be in advance"

*** "Woman will discover the unknown … we will accept and understand"

I also think American music is hugely responsible for generating distinctly American poetries—blues and jazz for the Harlem Renaissance, jazz for the Beats, and punk and hip-hop for Spoken Word and Slam. I actually think music has generated more poetries than poetry has. Sorry, Poetry! A couple of hours ago, in fact, I was talking to a friend who's a music writer and we agreed that practically all we learned, as teens, about French poetry came from reading interviews with Patti Smith in rock magazines. Granted, she's a poet, but it was through the musical aspect of her work that we connected with all that: "If this cool person likes this old French poet, he must be cool, too." We had to find out why! Which brings it all back to Rimbaud . . .

*** Adieu to poetry about theories of poetry, bonjour to narrative (but in new forms and styles)