Rosebud Ben-Oni on “Dancing with Kiko on the Moon” 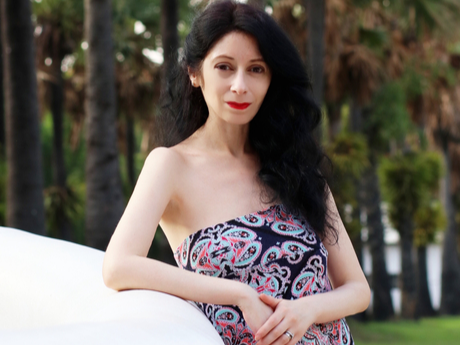 Dancing with Kiko on the Moon

On the far side we're kicking up tundra out of tú

on earth can see

though they swear by
(-we) though do not sing to
moonwomen, sickle-hipped & shape

when we are carousing with stellar winds & moon-
gust

Oh moon we're over the you about you

Dear moon do you need a tundra to look after

salamander with wings of swallowtail

Welcome to our moonhaus
& we don't have to ghost

we're over the you of you

& make more than a planet out of

do you need a

do you need a

the far side of

all the dark side moonwalking after you

From turn around, BRXGHT XYXS (Get Fresh Books, 2019). Reprinted with the permission of the author. All rights reserved.

On “Dancing with Kiko on the Moon”

I wrote this poem after seeing the sci-fi-meets-Greek-mythology music video “I Feel It Coming,” which Warren Fu directed for The Weekend’s collaboration with Daft Punk, and featured Japanese actress Kiko Mizuhara. She is truly incandescent in the video which, from the rolling opening credits, evokes 1980s sci-fi films like Tron and Blade Runner with their synthesizer-heavy soundtracks and back-lit rotoscoping effects. The video is a wonderful study in dualities: neon energies and desolate moons, lithe-footed lyrics and hypnotic deep bass vibes, the inescapable power of human longing and otherworldly premonitions that, if you ignore and give into their charms, would turn you to stone. And what of those AI-like French DJs who appear at the video's end to wipe away space snow and ash from a mysterious glowing purple screen? Is it disco? Is it demise? What awaits this inhospitable landscape as the screen cuts immediately to black? Does the dream, the discovery, end-- or is it just beginning?

I loved Warren Fu’s vision for this video. I really did. But I also had my own vision, a different kind of story, in which Kiko Mizuhara does not play a muse or secondary role to a male main character, but one as a co-conspirer, co-space-tripper, with another woman. In my poem, both women are unconcerned with the male gaze that feared the Medusa-like warning in the video. I wanted to express a freedom found in what it would mean for two women to dance on the moon, who make music for only each other, who discover how to express both love and lovesickness for all things outer space. On a related note, when I was writing this poem, I had a conversation with poet Darrel Alejandro Holnes about the Twitter account called @RogueNASA which had just recently emerged and what its very public presence meant; while the account’s bio now reads that it is “not an official NASA account” and “not managed by gov't employees,” I do like to think that there are scientists and thinkers out there— or rather, on the inside— who want us to know they are resisting and challenging the current administration and its policies. Writing this poem for me was an act of resistance, in how women (re)position their place in the narrative of space travel and the limitlessness of the imagination itself, and all the ways we speak and dream of the former through the latter.