Home > Features > Tributes > From the Archive: Those Sunglasses

From the Archive: Those Sunglasses 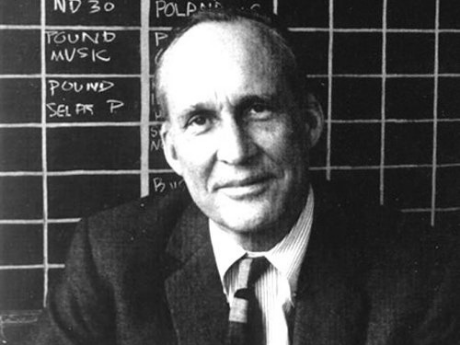 "It was James Laughlin in the beginning and it remains James Laughlin now, with never a disruption or moment of misunderstanding in a friendship and professional relationship that has now lasted for forty years or more. By nature I was meant more for the quieter and purer world of poetry than for the theatre into which necessity drew me. And now as a time for reckoning seems near, I know that it is the poetry that distinguishes the writing when it is distinguished, that of the plays and of the stories, yes, that is what I had primarily to offer you. I am in no position to assess the value of this offering but I do trust that James Laughlin is able to view it without regret. If he can, I cannot imagine a more rewarding accolade."

James Laughlin's delightful poem "Those Sunglasses" about his good friend, Tennessee Williams, was almost completely lost to the world through my own over-organization. Having finally finished (with my co-editor Thomas Keith) The Luck of Friendship: The Letters of Tennessee Williams and James Laughlin (which my boss, James Laughlin had asked me to do almost twenty-five years ago, as part of a series of correspondence volumes with his most famous New Directions authors, published by W. W. Norton & Co.), I was tidying up my files and decided to go through the JL/TW-related material that I had brought home from New Directions as James Laughlin's literary co-executor when I retired in 2011.

And there in a slender folder labeled "JL on TW" was a poem with a note stapled to the top: "Peggy—Ms. Peters [biographer Margot Peters who was then contemplating a biography of TW] and I were looking at pictures of Tenn with his "shades" and speculating on why he always kept them on when he was with people. J" The reference to Ms. Peters being at the Laughlin home in Norfolk, CT, dates it to the late 1980s.

Although I'm sure this was not the only copy of the poem, James did not include it in any of the volumes of his poetry brought out in the 1990s, and so it was never published anywhere and thus not included in The Collected Poems of James Laughlin 1935-1997 (New Directions, 2014), masterfully edited by Peter Glassgold. The poem will be read on April 11, 2018, at a discussion with the editors of the correspondence volume, moderated by playwright John Guare, at the Morgan Library in New York City. The Morgan is currently hosting a fascinating and poignant exhibition about Williams, "Tennessee Williams: No Refuge but in Writing" which will be up until May 13.

***
Peggy L. Fox was Tennessee Williams last editor at New Directions. After Williams' death in 1983, she initiated a publishing program of unpublished works (early and late plays), and collections such as Collected Stories, Collected Poems, and Stopped Rocking and Other Screenplays. When she became president and publisher of New Directions in 2004, she stopped editing individual volumes, but this work has been continued by Thomas Keith who has put together four volumes of previously uncollected one-act and short plays, and worked on individual editions of the plays with new introductions, as well as a number of other projects.