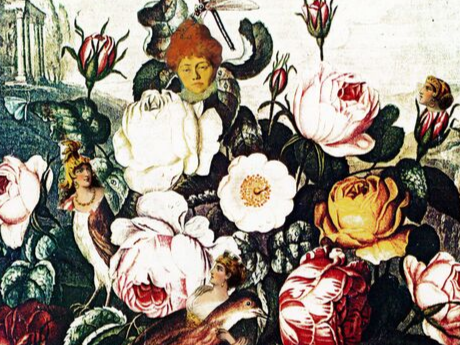 The following essay is a slightly modified excerpt from The Collages of Helen Adam, recently published by Further Other Book Works / Cuneiform Press. The volume features forty stand-alone collages, the last state of the collage poem In Harpy Land, Adam's photos from the 1964 Buzz Gallery poet's show, as well as two occasional collage suites (for Robert Duncan and Bob Hershon). There are also essays on Adam and her work by James Maynard, Alison Fraser, Lew Ellingham, Bob Hershon, Samuel R. Delany, and Kristin Prevallet.

In the late 1970s, Helen Adam wrote to Robert Duncan about "some pleasing weird collages" she had made, noting that her sister was ultimate arbiter of their quality: "I always know they would work if Pat says, 'No! No! I can't bear to look at them!'"[1] While Adam is best known for high-spirited performances of her witchy ballads, her substantial portfolio of visual work—which includes hundreds of scrapbooks, collages, and photographs—has been largely overlooked. Yet, as her letter to Duncan suggests, visual expression was a vital aspect of Adam's creative life and demonstrates that Adam's poetics were shaped by her close familial relationships as much as by her participation in poetry communities. Helen and Pat lived together their entire lives, shunning marriage for a coven of two, and their radical housekeeping, which included artistic collaboration, reveals that the creative space they curated in their home offered an alternative to the male-dominated arts scene. The resulting visual work recontextualizes Adam's poetic practice and repositions our attention from her coterie of male peers to the realm of the home and family.

When the Adam sisters arrived in San Francisco in the 1950s, they shifted from their childhood practice of scrapbooking and bookmaking to a collaborative collage project—focused on representations of women in the media, witchcraft and magic, and their homeland of Scotland—which became a substantial body of work. At the same time, Adam took endless photographs of Bay Area friends, a selection of which she displayed at the Buzz Gallery Poets Show in 1964 as photo-collages. Meanwhile, the success of their ballad-opera San Francisco's Burning tempted the sisters to produce it off Broadway, a plan that took years to gain traction and left them financially stuck in New York City. Finding herself unable to write poetry, Adam returned to visual art, creating well over a hundred scrapbooks during the late 1970s and 1980s, as well as her last major visual work, the ballad-collage series In Harpy Land.[2] Taken together, this visual collection offers a more complicated picture of Adam's poetics, politics, and creative impulse, and highlights Adam's contributions to the San Francisco Renaissance.

The sisters spent their working lives piecing together low-paying jobs that offered little outlet for their creativity, and Adam once lamented, "If it is true that one creates the external world from within, I would like to know what deep perversity in our natures makes Ida [Hodes] & Pat & I create around us the abominable fantasy of the business world."[3] Finding it impossible to create a living world that matched their imaginative lives, the sisters instead turned their energy to social commentary, creating some 165 collages that focus especially, but not exclusively, on society's limiting options for women and celebration of consumerism. Each San Francisco collage is simple in composition, based on a single page from popular magazines like Vogue, Life, or Picture Post, onto which several other visual elements and a short caption are pasted. Fashion models represent the majority of images, and the Adam sisters transform these disenfranchised women from vapid clotheshorses to alluring but lethal supernatural witches through the juxtaposition of haute-couture beauty and perilous animals traditionally associated with witches' familiars, such as bats, snakes, and toads. As Kristin Prevallet notes, the "collages give birth to another breed of women all together—one that is informed by male expectations of beauty, but simultaneously subverts objectification."[4] Unlike the Adam sisters and their friend Ida Hodes, trapped in their office workplaces, the women in these collages are formidable and commanding, even though they are frequently in dangerous situations and/or alongside threatening animals.

In Harpy Land similarly features the irrepressible power of supernatural women, warning, "All beauty fades for all must die / To dust life blows." Many of its images are from engravings by Gustave Doré for Milton's Paradise Lost and Dante's Inferno, which stage an eerie visual landscape through which Adam tells the strange tale of a menacing Harpy Queen whose tread causes even the trees to "drip with blood." Sometimes pictured as a beautiful maiden, other times as a prim Victorian harpy, and quite frequently as an odious demon-bird, the Harpy Queen is omnipotent and deadly. As fantastical as In Harpy Land is, Adam nonetheless still saw connections between its magical world and our own, writing to Duncan that she believed his recently passed cat, Orlando, appeared in its pages: "Oddly enough, about the time you told me he died, I was working on a Harpy poem, with collages. . . . Two of the collages show a glorious fat black kitty being ferried across the River Styx . . . I had visualized a girl cat, but there was a look of Orlando in the first black fluffy face!"[5] Another of Duncan and Jess's cats, Mr. Kit Kat, appears in Adam's homemade collage gift book given to Duncan. The collage gift books given to Duncan and Robert Hershon demonstrate Adam's generosity and the way she saw art and life as being mutually inclusive.

Likewise, her contribution to the Buzz Gallery's Poets Show, held in San Francisco in 1964, is revealing of Adam's role within the San Francisco Renaissance and the value in which she placed her friendships. Each portrait in the show has a corresponding caption, and both pieces were mounted on purple construction paper. Each photograph-collage is dated by year, as though Adam attempts to create a history of the San Francisco Renaissance using what Barthes calls the "fugitive testimony" of the photograph.[6] In her eerie double exposures, friends become supernatural, as in the photograph-collage of Link Martin. The Buzz show records some of Adam's happiest moments, using photographs she had taken throughout her time in San Francisco, among close friends and fellow artists, in her favorite locales like Stinson Beach, Sutro Forest, and the de Young Museum grounds in Golden Gate Park. The intimacy of these photographs is reflected in the inclusion of four duplicates of the Buzz photograph-collages in a scrapbook found in the Duncan and Jess household. Adam apparently created these pages herself, as the editorial note underneath one photo-collage of Jess muses, "I really love this one. Like Robert with the lions, it seems to me to have caught a hint of the lost world of romance. Jess is the very incarnation of Scottland's [sic] bonnie prince."[7]

As a group, the San Francisco collages, collage gift books, Buzz Gallery photo-collages, and In Harpy Land demonstrate both the breadth and commonalities of Adam's visual and written work, and provide unparalleled insight into how she engaged with the San Francisco Renaissance community. Most crucially, though, these visual works illustrate Adam's unusually strong emotional and artistic connection with her sister. The subversive women found in these collages have an antecedent in the non-normative lifestyle of their creators, who found thriving alternative communities both in the bohemian circles of San Francisco and New York City, and in their home.

[1] Adam is referring to collages she made for her book of short stories, Ghosts and Grinning Shadows: Two Witch Stories (New York: Hanging Loose Press, 1977). Helen Adam to Robert Duncan, 20 October [1978], Robert Duncan Collection, The Poetry Collection of the University Libraries, University at Buffalo, The State University of New York.