Home > Poems & Essays > In Their Own Words > Adam O. Davis on “National Anthem” 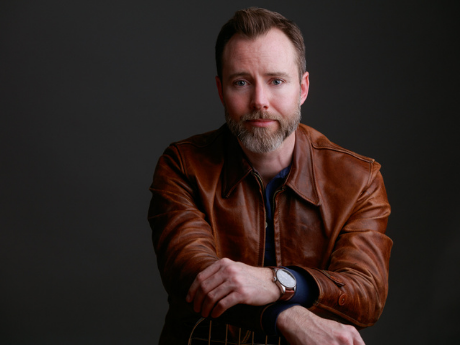 June is the first
month in bank
robbery season.

Silky
tornado
nestles in
the trash.

Angles of
neckties act
as compasses
for flight.

You will feel
the need
to disappear.

In an abandoned lot,
a slow conglomerate
of green tongues
devour a dead bird.

a)  Noctilucent.
b)  Nacreous.
c)  Lenticular.
d)  Unidentifiable
as fluoride.
e)  All of the above.

The sky is
a cinder-
block smashed by
hydrogen
and moth-
light.

Wreckage
is a kind
of question.

It asks you
to reconsider
your inventory.

In its abandoned lot,
the dead bird is gone.

that will devour
things.

Trees teethe
in a locust
zone.

as they undo
the street’s
ceiling. Cars

a prehistoric ghost
to slumber. At
night our cities

are swallowed
in swamps
of orange light.

Ghosts, federal
as bone, boil
around us.

According to
local sources,
a well-kept lawn
is the simplest
indicator of
economic stability.

Conversation is
a politic of trivia.

A newspaper is
a politic of a tree.

Everything
else stewed in
the oilfields of
Los Angeles.

And ghosts,
federal as bone,
boil still around us.

Already heat has broke
loose of its zoo.

They drown
the radioman in his radio.

and see the Midwest’s
checkerboard from

syrup over the river,
alming the sky of life.


From Index of Haunted Houses (Sarabande Books, 2020). Copyright © 2020 by Adam O. Davis. Reprinted with the permission of the author.

“National Anthem,” the antepenultimate poem in Index of Haunted Houses, began with a few phrases adapted from the 1890 Milton Bradley boardgame, Peter Coddle’s Trip to New York. The game, described by Margaret K. Hofer as “reflect[ing] the nation’s awareness of the growing urban/rural divide,” inspired the poem’s embattled concern with the embattled relationship between the pastoral and the citified, the natural and the technological (farmland as viewed from a 737’s passenger window, gasoline as the ossified past made present pollutive). In exploring this, I reflected on what I came to think of as “sarcophagal thought”—progress as a nesting doll where every advance isn’t a step forward but a container designed to contain the containers that came before it: histories preserved and obscured at once. Something Lizzie Magie, the true creator of Monopoly, knew plenty about.

The Landlord Game, a modified version of which would later serve as Charles Darrow’s lucrative monopoly on American boardgames, was invented by Magie in 1904. In line with her Georgist leanings, her game detailed the subjugation of the poor by wealthy landowners (trespassing on Lord Blueblood’s estate or Dr. Hogg’s game preserves got you sent to the poorhouse) and emphasized the need for “natural opportunity to labor” through access to timberland, farmland, coal mines, and oil fields (instead of starting at GO—and then collecting $200 for doing so—players began on a square that stated “Labor upon Mother Earth”). Outside of its economic policies, one of the most striking things about The Landlord Game was its “circular” gameplay. There was no satisfying linear progression from point A to Z but rather a recursive coil that obliterated the notion of an ending, meaning that the game was a loop from which there was no clear escape. Like the game it later became known as, you played it until everyone went broke or people got tired, but even once the board was packed away, the game, in a sense, carried on. Like an echo.

Index of Haunted Houses is a book of echoes—a chamber or series of chambers in which certain images, words, or lines reappear though never necessarily in the same way. Like language or ghosts, these apparitions are transformed by the manner of their application or appearance. One refrain in particular that speaks to the notion of the sarcophagal, “memory / a thing / that devours / things / that will devour / things,” arrives, finally, at its terminus in “National Anthem.” Indeed, this poem proves the final resting place for many of the book’s refrains, and its repurposing of them speaks to the collection’s possessive and repossessive concerns: What was this place, this person, this poem before they were it? And what are they now if not what they once were? In the newspaper we still find the tree it once was. In the locusts who ate Ohio we still find that state however piecemeal. Yet in new forms there must also be new functions. So with this poem—a poem built out of the book it built, making it a poem that is both the thing and the ghost of the thing—I aimed for a kind of semantic summation: an index within an index, an echo within an echo.