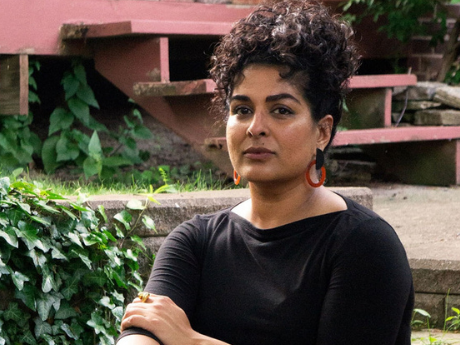 Milestone 1 (We speak about your daughter)

your uber has arrived
we ride
quiet, curious
there is an us
forming
a shoreline
serrates the seats
his daughter— he says
should marry, but his daughter— he says
wants to study
yes— I say
she is right, as I was right
& my father?— what does he do,
does he live with me?
no— I say
I would like him to, but he
must work— that is how it is for girls— he says
& for us fathers— for us too, it is like this only

From Curb (Nightboat Books, 2021). All rights reserved. Reprinted with the permission of the publisher and poet.

On “Milestone 1 (We speak about your daughter)”

This poem is the first in a garlanded series written as documentations of taxi and Uber rides with drivers who are immigrants from South Asia— from Pakistan, Kerala, Bangladesh, and Punjab. I travel a lot and spend much of my time waiting while moving—in airports, in cabs, in planes. I began to notice that these spaces of “waiting while moving” became occasions for loquaciousness, laughter, even delight, when the drivers or fellow passengers were South Asian. Within the upholstered interior of a Toyota, lit by street lights, we would tell each our stories of our loneliness in America and easefully answer the question “where are you from?” asked, for once, with warmth rather than suspicion. The drivers would carve their stories at oblique angles, or sketch them in brisk quips, or unspool them in artful, practiced monologues. Short rides yielded napkin-sized vignettes; longer rides held our moonlit silences. What, I wondered, remains vast and oceanic in our small talk? What intimacies remain possible within this transactional relationship? If we can sense each other’s warmth, if we can smell the camphor and cumin on each other’s jackets, then who are we to each other?

Each poem is named after a certain “milestone” breached in my ongoing intimacy with these strangers. This poem recalls an Uber ride in New York City. I had asked to be driven to a restaurant for lunch with my friends Julia Bloch and Rachel Zolf, before a reading I was giving at The Poetry Project with Khadijah Queen. The Uber driver and I spoke about his daughter and my father, and he wanted to know what I, “an esteemed University Professor Doctor,” thought about his daughter’s path in life. We disagreed; we laughed; we hoped for the best—whatever that was—for his daughter, bless her.

When we pulled up at the restaurant, I noticed an Ailanthus tree cropping out of a brick wall. It seemed significant that a tree— particularly a migrant species— would take hold in brick and cement, assimilate its fate to something as temporary as a high-rise building. The poem’s reference to the Ailanthus tree owes to the letters contained in The Horticulturist & Journal of Rural Art & Rural Taste (1852), which documents the (white) nationalist advocacy to remove certain species of plants and trees from cities that were hubs of diversifying demographics and which, in particular, became symbols for anxieties around immigration

“We confess openly that our crowning objection to [the Ailanthus tree], this petted Chinaman or Tartar, who has played us so falsely, is a patriotic objection. It is that he has drawn away our attention from our own more noble native American trees, to waste it on this miserable pigtail of an Indiaman.”

The New York Times described the tree as a “filthy and worthless foreigner,” aligning itself with the “Know-nothings,” a far-right nativist and anti-immigrant party in the 1850s. The tree has gone through many lifecycles as a symbol— an exotic mark of class ascent in the early 19th Century, a threat of immigrant invasion in the latter half of the 19th Century, a metaphor for resilience and uplift from urban poverty in the mid- 20th Century. Reflecting on his time walking in Washington Square as a young child, Henry James recalled the characteristic odor of the Ailanthus as follows:

“It was here that you took your first walks abroad, following the nursery-maid with unequal step and sniffing up the strange odour of the ailanthus trees which at that time formed the principal umbrage of the Square, and diffused an aroma that you were not yet critical enough to dislike as it deserved.”

The tree becomes, in James’ novel, an ambivalent relationship— alternatively oppressive and freeing, corrupting and pure— reminiscent of the particularly olfactory terms that describe immigrant (particularly Jewish and Asian) enclaves in the 19th and 20th Century.