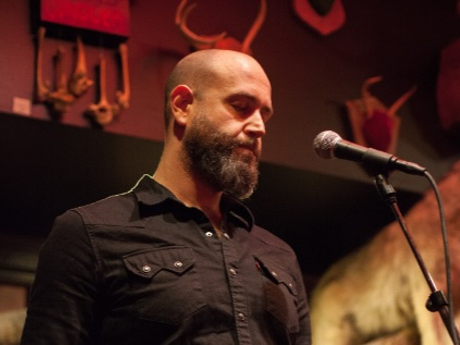 And lie all my hours
Upon your reckless hands

Make myself a prisoner
Of the sky

The sweet vermouth
Of your teeth

In the attic of my flowering heart

I hear the parade of mouths
Beating upon my sleeping head

I hear the thieves rising
With their fingers full of moon

Uniform of the earth
And the saint children marching


I hear your memories of me waken
And glisten

And rise in the hollow
Of my muscled dread

Treading through the unlatched snow
Here they come


From The Truth Is We Are Perfect (Third Man Books, 2015). Reprinted with the permission of the author.

On "Recreating a Miraculous Object"

The poem—more dirge or chant—I composed less to conjure an encounter than to become rich with the echoes of its absence. What we do when we are helpless against our losing. The utter dread of loss. Our anxiety to circumvent grief simultaneously propelling us toward its void, as though we are concentrically orbiting that inevitable point of departure—so dense nothing we do can escape its pull. And all for what? My struggle is surely worse than oblivion. That moment when the full wave of inevitable nothingness breaks over me—the stillness that follows when panicked desire gives way and true mourning has not yet begun—when I suddenly become so lucidly hopeless that, if even just for that instant all my future paths seem equally possible and illuminated. My crystalline vision when I've given up wanting. That pure empty prism.

We participate daily in a culture of desire: for things, for people, for other ways of being than how we already are. This isn't a western malady; this is the human condition. Non-attachment has been discussed in scriptures across the world for over the past millennium. However, in my experience, to preemptively practice non-attachment is a hollow exercise. It's not until we actually suffer that non-attachment becomes a meaningful discipline.

Have you heard the story of the Buddhist master who was found sobbing by his students? When his students asked him what was wrong, the master replied, "I just heard that my daughter has died." His students were perplexed, alarmed by his unrestrained display of sorrow, and one responded, "But master, you've taught us that everything in this world is an illusion." The master replied, "The death of a child is the most painful illusion of them all," and he continued to cry.

Thus, experiencing an intensity of absence that is almost unbearable, I inure myself to desire. I draw into myself everything I long for and become a pyre for every thing I must live without. This is the heart of the poem, and the book. Nonetheless that satori of destruction is fleeting. As time passes I am betrayed and betray myself anew. The shifting face of desire betrays me. I am betrayed by memory and the failure thereof. I am betrayed by my past selves, by whom I am perceived to be by others and the things I am trying to become other than. Already I have betrayed myself here, and in the writing of the poem itself—both further acts against the void.

And so I took this poem, which was born from the series of self-annihilating poems that closes the book, and planted it as an epigraph at the beginning—set to bloom again in the book's final movement. A herald of the hallelujah beneath.