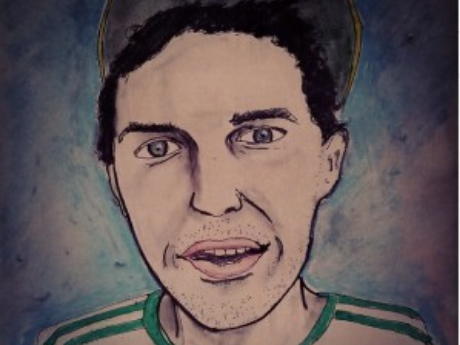 Be Yer Own Hitman (Deathsounds/Lovesongs)

Can you hear me?
A whisper implies only two conceivable things:
Rumor or confession.
Why do the trees whisper?

Thrashing against the brack
They are wildly blinking out leaves.
An average, normal human being
Blinks 17,000 to 22,000 times a day,

17,000 to 22,000 blinks
Which go entirely unnoticed,
Forgotten before the inevitability
Of their instant. So what.

So the sun milks the grass,
The flowers arrive at wisdom
Is easy to come by,
Impossible to learn.

Above us the cloudscape, constant,
Annotates our deaths and loves,
Our failures and lives.
Can anyone hear me?

From Fur Not Light (Burnside Review Press, 2019). All rights reserved. Reprinted with the permission of the author.

On “Be Yer Own Hitman (Deathsounds / Lovesongs)”

This is the second poem in my collection Fur Not Light; entitled “Fin,” the first borrows from The Misfits, Samuel Taylor Coleridge and the fictional reality of German fairy tales. Like “Fin,” this poem—which is taken from “Be Yer Own Hitman (Deathsounds/Lovesongs),” the first section in the book—details how what we as humans often take to be ordinary or commonplace can, under a different mode of seeing or thinking, be entirely alien in both conception and scope. Although an earlier version of the poem focused more on the naturalistic elements—the annotating of clouds and flower-wisdom—this version took as its centerpiece the fact that, to quote from the articlewhere I first encountered the knowledge: “The average person blinks some 15-20 times per minute—so frequently that our eyes are closed for roughly 10% of our waking hours overall.”

Although I was initially skeptical, as 20 blinks a minute somehow seems exorbitant, subsequent research made clear that such exorbitance was accurate, as well as the general 17,000-22,000 blinks performed by the “average” human being day in, day out. (With averageness comes the desire to know what lives on the other side. I verily wonder how much the unaverage human being blinks or doesn’t blink over the course of their average day.)

From the fleetingness of that poetic pressure point everything else seemed to coalesce, with the poem’s final lines “You are not your own master, / You are not your own—” hopefully imparting my own belief that so much of what we as humans take to be indubitably true (in this particular instance, that our daily wakefulness is indeed lived fully awake, not 10% half-asleep) is often decidedly less than that.

Full of sun-milk-grassing and tree-wind-fornication, that the poem doesn’t make “sense” is also the point. I’m often suspicious of narrative poems, especially ones that end on an epiphany or posit some form of beginning/middle/end closure. They seem too crafted, too intent on announcing ownership over a moment or sensation that’s liable to change by the next page. In my own work I’m rarely interested in results, per se; I don’t write to capture the world (I move past still lifes fairly quickly in museums) but to correlate what I see and feel to what I don’t have any way of directly comprehending, at least not linguistically. To that end one of my favorite group of writers is the Russian Oberiu group, namely Nikolay Zabolotsky, Daniil Kharms and, especially, Alexander Vvedensky. Vis-à-vis their personal and creative courageousness in the face of Stalinist oppression (all three writers died prematurely, with Vvedensky perishing in a prison train car at the age of 36 or 37, Kharms of starvation at the age of 36, and, after years in prison and in exile, Zabolotsky dying of heart failure, aged 55) what entrances me is their refusal to cohere, to conform. As frequent Oberiu translator Eugene Ostashevsky described it in 2013, the “active non-understanding of reality” was the point of art for the group. Although the stakes are decidedly lower for me, I too embrace this schism in the above poem specifically and Fur Not Lightgenerally. My lacks are my strengths.