Home > Poems & Essays > In Their Own Words > Joshua Clover's “Haecceity” 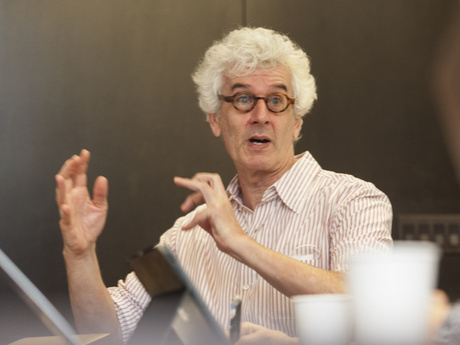 From Red Epic (Commune Editions, 2015). Reprinted with permission of the author. All rights reserved.

The poem is a derivation of Diane Di Prima's "Revolutionary Letter #19" ("if what you want is jobs / for everyone, you are still the enemy,/ you have not thought thru, clearly / what that means…"). It's the last poem written for the book. Red Epic tracks the world following on the global collapse of 2007, trying to grasp it both systemically and at the level of local textures of life. It follows the rises and falls of political mobilizations, an oscillation I call "era of reading groups, era of helicopters, more reading groups, more helicopters." These mobilizations began locally with the riots after the murder of Oscar Grant, and then university struggles against austerity's nihilism; they peak, perhaps, with the Oakland Commune in 2011. As I was starting to prepare the book for publication, Michael Brown was killed. I went to Ferguson as soon as I could, and spent some time there; this poem comes from that experience as well as the riots in the Bay Area after the grand jury failed to indict the killer. Each riot is powerfully particular; each has (oft-dispiriting) similar aspects, the police murder of a black kid most common among them; all of them are a picture of the future, of what struggle is going to look like. I am moved by all of this, and never want to lose sight of the particulars. We don't really have a word for "haecceity" in English; it's usually translated as thisness. The thisness of social antagonism, that's what I am trying to get a hold on.