Home > Poems & Essays > In Their Own Words > Ruth Madievsky on “Propofol” 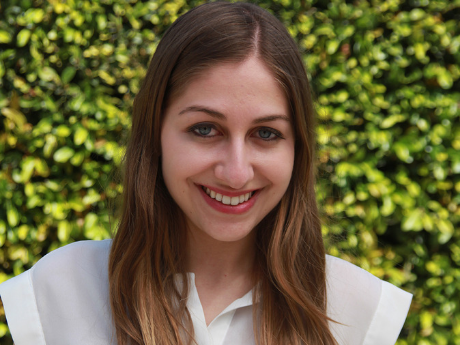 My kidneys are leaning into the wall of my back
like a pair of boxing gloves,
the way my grandfather is leaning
into the idea of an operating table,
a paralytic agent, his body
a space station for someone else's hands.
I work in the hospital where it will happen.
I work and wait for the part
where the lungs I keep wanting this month to be
stop huffing propane, stop threatening
to make like my patient's vein
and collapse. Inside
the sterile compounding room,
I shoot drugs
down an IV bag's gut. I listen
to the outer-space hum of machines
that eat the air out of the room.
There is nothing sexy
about incision.
There is nothing about the phrase
nasogastric tube
that makes me want to look
both ways before crossing the street.
I want to hold him
like he is something other
than a mucus membrane.
Like maybe the planet inside him is Pluto,
like it's not really a planet at all.

From Emergency Brake (Tavern Books, 2016). All rights reserved. Reprinted with the permission of the author.

I wrote my first book of poems, Emergency Brake, entirely while I was in pharmacy school. The relationship between my work as a writer and my work as a healthcare provider is porous, and "Propofol" lives in that friction more than any other poem in the book. I wrote "Propofol" when my beloved grandfather was undergoing cancer treatment. At the time, I happened to be doing a clinical rotation at the hospital where he got chemotherapy, radiation, and had his resection surgery. I was also reading Susan Sontag's Illness as Metaphor and finding it surreal and off-putting to constantly filter my experience of my grandfather's illness through concurrently scientific and symbolic lenses.

I felt vaguely oppressed by my curriculum-mandated knowledge of the prognostic determinants of his illness and the pharmacology of his medications. For years, I had been consulting patients undergoing the same regimen at my work. Giving my own grandfather that consult was isolating and weird. The outer space metaphor running through the poem came out of my aversion to reducing my grandfather to a subject in a clinical trial or a mucus membrane or a wading pool for toxic drugs. It also speaks to the inherent unknowability of our bodies, how our understanding of their inner workings is shifty at best.

Which reminded me of Pluto's dubious status as a planet in our solar system! How Pluto's planetary status was a given throughout my childhood and adolescence, only to be stripped away in 2006. Of course, in the year since Emergency Brake came out, NASA has changed its definition of Pluto to "dwarf planet," so this poem written in 2015 is already hilariously dated. Our understanding of cancer has also changed and paradigm-shifting new treatments targeting the immune system have emerged. For every answer, countless new questions. Our bodies remain as mysterious as ever.