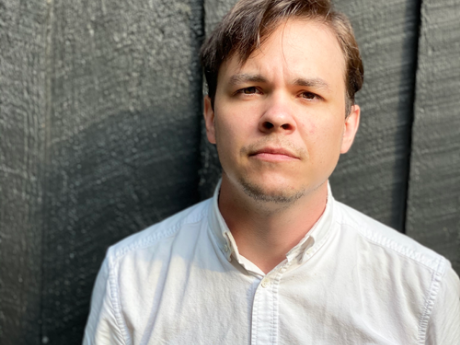 Blue is the language

The human spirit is quiet and

defeated in strokes both slight and broad, but

to lay its instruments on.

A resigned transition of power

cued in time with dinner.

to enjoy the benefits of our situation,

but who am I really talking about?

A gasp of brightness with the realization

there had been someone there all along

dragging their feet and kicking up more dust.

then a few letters are peeled back

and there’s just more language underneath.

An element is seen as fruitful.

no longer thrumming with nature’s routine

but data-driven and wanting the glimmer

of an answer instead. So, we took on more work

than we expected. The hours were billable

though embarrassing when I look back at it.

I’m month to month wondering if

I’ll soon burn out. This group text I’m on

wakes me before sunrise. Mere curiosity

helpless in the waves of consciousness

heaped upon myself. I’ve come to

find, however, under the morning

is only more morning. Funny

how important a subject becomes

when it’s the one possible outcome

of leaving well enough alone as there is

an ethics of breaching a limit

though it is possible

through sheer force of enthusiasm

and miss the point entirely

unable to apprehend the thing itself

until it’s out of reach, sent

skyward with the rest of our words

for the common generosity uncovered

before the morning takes its first breath

to say criticism has a natural antipathy

with biography as if a life of the mind were

say that. It said nothing. Earlier, it was only morning

then. It would go on to say nothing

and even that was only morning, so it said,

“Peel an orange, and it’s the language the sky speaks.”

"[Upstate, 2/5/19]," an excerpt from An Orange (Pioneer Works / Wonder, 2021). First published in The Brooklyn Rail. Reprinted with the permission of the author.

This poem, like many poems, started in the notes app. I recently found out this is potentially hazardous. There’s some sort of bug triggered when you sync notes between your phone and computer that erases the note entirely. Just a quick PSA: I know it’s so convenient, but for the sake of your poems and if you don’t want to spend hours on the phone with an Apple rep, y’all, get a pen and paper. Call me a luddite, but your poems are too important to leave them to the threat of sudden disappearance. I mean, I still use that app to write things down, but then again, I’ve never been great at taking my own good advice.

So, the headier days of nonchalantly tapping lines into my phone is when this piece got its start. At that point, I had been working with regularity on a series of poems that were all taking a similar form, this canal of spaced lines down a single stanzaic column, each poem untitled and marked with a date and place of composition. These are somewhat similar to another Ted’s (Greenwald) early poems and maybe that’s where I got this sort-of form. I see it often elsewhere—that it reads somewhat commonplace is part of what draws me to it—but I’m actually unsure of its origins. In fact, if anyone knows, I’d be happy to hear your take (@tedodson on Twitter). It’s a capacious form, being generous to write into and taking to length well, fitting for these poems that were making material from different parts of my life and other writing I’ve often worked with: criticism, essay, journaling, epistle. These different modes have their own ascribed uses, usually generalized—journaling is writing for (yourself), epistle is writing to (another), essay is writing on (a subject), etc.—and I am interested in how, when poems co-opt these modes as opposed to acting in service of them, these uses are jettisoned and conform toward the utility of a poem, which is nothing.

That is a little glib. Inaccurate really. It’s an easy refrain: “Poetry has no use.” Poems have been used for all sorts of reasons, as educational material, as primary source, as entertainment, as manifesto, as propaganda. However, poems are conscripted to these uses—this idea, even, is borrowed from Maya Deren’s notion of popular cinema being a mish-mash of cribbed techniques from narrative and visual arts rather than an expression of what is unique to cinematography or film—and ignoring any of this for the sake of a pithy pronouncement is specious. What I really mean is closer to what Eileen Myles wrote about John Cage, “You have to bear silence…It’s the only lyrical note. Perhaps it’s our gift to the future.” Or Rancière’s idea of how the poem can contain a music impossible for an orchestra to play. There’s a quality of the poem that imagines beyond the chiefly auxiliary uses poetry acts in service of or takes from. There’s an excess here that the poem creates, operating as a nothing to these appropriated uses, having exceeded what they circumscribe. By process of elimination, this excess must be significant to one thing, if anything, the poem itself.

Perhaps it’s better then to ask what a particular poem’s use is. And just to note, this is different than questioning a poem’s meaning. I am, personally, unconcerned with hermeneutics. I don’t write with meaning in mind, nor do I typically read for meaning. But I do, often, write in series, and I’m attentive to how serial work makes sense of itself, each poem a revision of the larger whole. The poem above is, simply, a reflection on peeling an orange I noted into my phone that then provided an action and an image for the poem to approach. In a greater sense, however, this poem was useful insofar as it provided its shape to the rest of what would become An Orange. The image, in this case a humdrum observation, is imagined into a poetic excess, an elevation of image into a thinking space, a decision to create more from the image, to repeat, transform, and spill. It spills over into other images, the next lines (“Blue is the language / the sky speaks” is a re-envisioning of the first two lines), other poems, repeating and shaping itself, shaping a book. Whereas, in the hellscape of our current reality, surplus is seen as a detriment to the market—even recently, police were deployed to guard a dumpster full of still-edible perishables outside a Portland grocery, which had lost power in a winter storm whose severity was clearly amplified by our nigh-unavoidable and ever-worsening climate cataclysm, from people who just needed to eat—poetic excess acts in opposition. The reality of a poem is endeavored by an essential generosity bearing itself away from and deeper into itself, and while it is often adjacent or future-tripping off the reality we occupy, it’s nevertheless distinct and dissenting, a dream of possibility for the sake of possibility.