An Interview with Matt Nelson of Mellow Pages 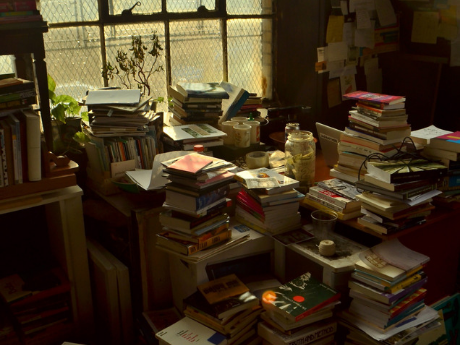 I caught up with Mellow Pages library during a period of transitions: the library had just packed up their books and moved down the hall of their Bushwick building, going from a tiny white room to a small black room; half of their staff, Jacob Perkins, was away for a few months fishing in Alaska (a summer job he returns to annually); and the other half, Matt Nelson, had just landed a position as a librarian at The Center for Fiction in midtown. On top of that, the library was growing quickly and constantly, having been recently profiled in The Bushwick Daily, Time Out Magazine, and The New York Times.

Mellow Pages is a library and reading room with a focus on small press literature and an emphasis on "moneyless" giving. They serve as a template for a community-based library, and have even published a how-to guide on starting your own, offering guidance on topics from "sanity maintenance" to "book display." I was able to talk with Matt Nelson, who described what the process of starting a library has been like for them.

In your loaning library manifesto, you guys talk about having a "vibe," and the importance of simply being warm and engaging. Is that a good description of Mellow Pages?

I think so, because obviously we are hitting a category of the world that likes books, but within that group there are people who like being alone with books, and there are those who want to share them either by just talking about books or actually by physically giving a book. We definitely fall in that second camp. We're both from the Pacific Northwest, so we're both sort of… laidback, I guess. That's how our moms would probably describe us. It's important, if you want to share books, to be prepared to hang out with people. It's not just your place. People will come in, they will grab a book, and they'll want (or need) to talk to you. I think it's very important to have people feel comfortable when they walk in, and one of the biggest factors determining that is your presence.

In that case, what would be a normal, mellow day?

Getting here, let's say, at 11. Or, if we are particularly hung over, at noon. We usually have a package waiting for us, which is a result of the attention the bookstore has received. A lot of people who read about us have either published work for small press or run a small press. We come in, process our new inventory, take a picture, and post it on our Facebook and Tumblr. During the day I think it all depends on work schedules, so for people who don't have 9 to 5 jobs, they'll stop by. A couple of friends will come and hang out for a while. A lot of people who come to this building don't necessarily come for the library—it's a pretty well known art studio, so they'll poke their head in, assuming we're another studio. We could get one person a day or 25. It really swings.

Now you have a circulating currency of books from the members, but how did you get that first 10, 50, 100 books for people to borrow?

Jacob and I were in school, and we had to buy a bunch of books for that. And a huge increase in inventory was from Jacob's brother, who had just graduated from Duke with a PhD in Political Science. Jacob went down there with a U-Haul and just loaded up all of his brother's great philosophy and social theory books. That tripled how many books we had at the time. We also picked up a bunch of small press stuff that we knew people would like, and we started taking pictures of our stuff for the internet. We used that internet presence to go to the AWP Conference, and luckily a lot of the people there were into it, which garnered more photos, which garnered more attention. It made people excited about being members when the saw a book they wanted to read in one of our photos.

How many titles are you carrying now?

I think our last count was over 2000, including the chapbooks and the zines and journals that we have.

Why did you move down the hall?

Because it was bigger, and we wanted to be able to fit more people in for readings. That other space was great as a DIY punk space, sort of sweaty and everyone's sort of talking to each other, but for bigger events we would spill out into the hallway, and the reader would end up standing in the doorjamb. But one of the things I loved about the other space was that it was so small. Even if you wanted to be introverted and quiet, because the space was so small and narrow, you were forced by the physical environment to at least be okay with the fact that other people were in close proximity to you. But now it's a little different and with this much more space, it's valuable to try to counteract that intensity with interaction.

Does that mean there are space limits for you guys and for this kind of project generally?

I don't know. It's nice to have a smaller space, it feels like you can do more with it; it forces you to be creative. If you were to have a larger space, it might be necessary to create little sections, where people can sit down and read or engage more closely with people. Say you're going to an outdoor bar, and there are all of these tables and all these people, and you're introverted, and it's loud out there, and there's someone next to you who's not part of your group so you don't want them to hear what you're saying, or you're influencing how you say it because you think they're cute—the smallness is really great because everyone's interacting in this one space. That doesn't even make sense.

No, it does. And that makes this a bar for quiet book lovers.

Yeah. Except you don't have to buy anything. We definitely wanted a place where people could come and not feel pressure to buy anything, because I think that when you're walking into a place that sells things—let's say for a clothing store—there'll be a greeter, clothes, a salesperson and a cash register, and if you don't buy anything, it almost feels like you're wasting their time. One of the cool things we did when we set our space up last time was to put Jacob's desk was perpendicular to the entrance. So you could see him, but he didn't necessarily see you, since he'd usually be doing his own thing. We will probably do that again, so if you just want to come in and read, no one is going to be judging you or waiting to see if you are going to buy or steal something. Likewise, we try to be real. Like if I'm feeling piss poor and I am writing or something, I am not going to extend myself, but if I'm feeling good and you have questions, I'll give you the spiel and walk you around for a while.

I assume from the typical readership of small presses that you guys get a lot of writers as members?

We've got a lot of small press people, like Dan Magers: he's a member, and he donated his book, Party Knife, and has donated some other books, and he has his own press called Immaculate Disciples. He's a member who is very specifically in that small-press community, but then there's also Richard. He's here for a three-month stay from Australia, and he just wants to read books. So he comes here and asks for suggestions and is introduced to the world of small press, but he doesn't only read small press. Both of those people, though, are actively involved in Mellow Pages: Dan's done a reading here, and he is set to do another one where he, the author, and some reader will both read from his book; Richard nailed books to the wall yesterday because he wants to help in any way. He wants to start a community library in Melbourne.

With such a tight community of readers, you and Jacob have a good amount of sway over what your members, friends and neighbors are reading. Together with the element of randomness that the store necessitates, how do you try to wield that power?

One good way is to give options and encourage test-driving things: saying, "Why don't you sit down and read a few pages and see if you like it." I usually try to give small press recommendations, unless someone comes in asking for a certain title. And I do use my personal taste and experience with the books I've read. One thing that sucks of me: there's a difference between reading a book and knowing about a book, and so I will know about a lot of books, and I'll pawn them off on people and say, "Tell me how it is! I don't know if it's actually good, but it's about camp and sounds like it would be right up your alley!"

You have labeled yourselves "no-profit" as opposed to the official "not-for-profit" status, because of the compromises and complications that applying to be an official non-profit would involve. As you guys get bigger do you think this will change?

Earlier today I was actually looking at non-profit stuff and thinking about calling a pro-bono lawyer that works specifically for the arts to figure out if we should do a straight-up non-profit or perhaps go through this organization called Fractured Atlas, which has non-profit status and sponsors smaller arts organizations so that they can receive tax-deductible donations. It would be really nice if this could be a job that I could do. Another thing that would be really nice would be to get someone that knows more than we do. Like, about the shelving system—if you asked me where Kafka stories are, I would just be able to say, "It's in," and, "Good luck."

You guys have created a blueprint for how to run your own communal library. Did Mellow Pages have a model?

Yeah. Back in Seattle there was this place called Pilot Books run by Summer Robinson, and that's basically where I got my first taste of the small press world. Readings were always free and they were even able to get some big names. People would just hang out there because they had that same feeling: it doesn't matter if you buy anything. But that was ultimately detrimental to its for-profit livelihood.

Do you ever let customers buy books?

No, never. When someone asks we usually just say no. If it's a book that we know the publisher of, we put them in contact, and thereby create some kind of money flow. But otherwise we're very against the idea of money here, unless it comes from a personal donation. Which would be another cool thing about becoming a not-for-profit with money—we would be able to actually buy books from publishers.

You guys have written that part of the responsibility of running a library is the curation. Do you guys turn away many of the books that come in?

We try to, but we are just so passive.

People push their books on you?

Yeah, we have a copy of The Notebook. But I think it's important to have a vision of what you want, because there are other places with other materials. We don't want to be the place where you dump the books you don't want; we are one place with one idea. We don't turn down any small press, though. There we don't discriminate.