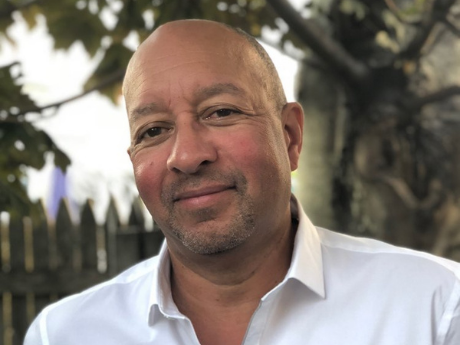 "Questions of Faith" is a selection of excerpts from interviews that Dianne Bilyak has conducted over the past decade. The interviews began as her master's thesis for The Institute of Sacred Music and Art at Yale Divinity School. The poets were queried about their religious upbringing, current practices, and how these may or may not have influenced their writing, as well as general questions related to faith, doubt, and meaning, and more specific questions related to each poet's work.

Dianne Bilyak: I’ve read that you come from no particular religious background, so I’m wondering if you’d talk briefly about the role religion played for you growing up, and how it might relate to your writing.

Carl Phillips: Well, it didn’t play any role in my growing up; I didn’t go to any church or anything. My mother is English, and I guess she was raised in the Church of England, and my father was raised a southern Baptist in Alabama—they’re an interracial couple. As I understand it, when they started going to some kind of church here in the United States, when they first got married, they just thought there was so much prejudice, which no doubt there was. So they decided that the church was hypocritical, so therefore I never had any kind of church training and I don’t know if I’d describe myself as religious.

I guess my feeling about religion is that I think it’s exciting to try to wrestle with. It’s a larger question of how are we here and why, but I can’t say that I have some kind of fixed belief. Much of my religious interest comes from studying the Greek tragedians, you know, that kind of pre-Christian wrestling with “How can this be, that people feel a certain way or do certain things and yet, punishment or triumph, are not always fairly awarded?” I think that’s where it became interesting to me. And later, when I was at Boston University, I took a course with Geoffrey Hill in the poetry of religion, and that’s where I read people like John Donne and George Herbert for the first time. And also, when I went to UMass, I got an education degree there, I took a graduate course in Milton’s Paradise Lost, and that’s what first got me to read the Bible. It’s important to understanding Paradise Lost. And, I was just fascinated with all of these questions of what is evil, and what is morality.

Plus, I think between that and then my own sexual identity, I think it started making me question morality itself. And so, I think that’s where I stand now, that I think, well what is morality? And, you know I’m sitting here in my study, and, I live next door to this gigantic cathedral, it’s the head of the Catholic diocese in St. Louis and, so it’s strange, I sort of stare out there at this big dome with a cross on top of it, and I’m very aware, too, that that’s a church that will say that homosexuality is evil, you know, some kind of intrinsic disorder, and here I am not feeling evil or disordered. I guess I’m a religion-curious type person, where I’m interested in how people arrive at something like a belief in God.

Dianne Bilyak: It sounds like you’re more of a witness and observer. I have this notion that the poem exists somewhere in the universe, and the poet listens for it. They give birth as a surrogate, not fully as a creator. For you, is there a self who writes the poem, or some “unknown other” trying to rise up through language?

Carl Phillips: I guess I believe in multiple selves, so I feel as if, the part of me that’s now talking to you doesn’t seem to be the one who would write these poems. A very typical thing that happens to me is I’ll be walking the dog in the morning, and out of nowhere, several lines will appear in my mind, and it’s very odd because I’m not planning on writing a poem, and I don’t even know what these lines necessarily mean or could be a part of. So I write them down when I get home, and that sometimes makes me think, ok, well, is this some “other?” But obviously, well it seems obvious to me, that it has to come from me, from my head, or some other part of me that I don’t have control over or access to, that somehow kicks in. I guess in a way it’s a meditative state, that I’ll be able to actually start writing these down and seeing how they work. And there’s a feeling afterwards that I could never have written this if I wanted to write a poem about this, or like this. So, there’s some kind of separation between me and how the poem gets written.

Dianne Bilyak: I want to talk about poetry and prayer. There was one particular essay where you spoke about the two having the same type of contemplation and attention. In your work that comes up a bit, but many of your poems have the trajectory of prayer, and you’ve actually called them one-directional and upward. If you’re not bargaining with God, or hoping to receive answers, then why pray with poems? What do you hope to gain?

Carl Phillips: I do think of poetry as prayer in that it has that prayer-like sustained attention. But I guess I don’t think prayer has to be God-directed. And, I think a lot of my poems are to an imagined lover or a negotiation with the beloved is how I would put it. I feel there’s some kind of parallel between trying to bargain with God and trying to bargain with a beloved, because that too can be one-directional. So, in some ways, because we expect it to be one-directional with something like God, that’s easier to deal with than a human being, where we know if they wanted to, they could return our attention. But also, I think of a lot of my poems as being self-directed, and in others I feel as if some part of myself is talking to another part, that withholds itself in the way that God does.

Dianne Bilyak: The other part of prayer, I think, assumes a listener, whether that listener is a part of you or some mysterious or known other and creates a relationship.

Dianne Bilyak: How much of the world is, as you’ve said, “incidentally symbolic?” Can you talk about how symbols are presented to you? Is the poem a sustained attempt to stay with that mystery, to walk with it for a while?

Carl Phillips: I think it’s human to want to make things have meaning, whether they do or not. And, so I guess the world to me seems fraught with symbols, with things that have meaning if we could only read them. Yet, there’s another part of me that says no, that’s not possible, when a tree bends in the wind’s direction, that’s because the wind is blowing; it doesn’t equal anything. But maybe I have let go of that sort of transcendentalist part of me that wants to say, well, it does mean something. For instance the sea eroding the shores can speak about the erosion of the body. There’s a part of me, maybe it’s the pagan, ancient Greek part, that feels like there’s these little daemonic forces, and it’s just that we humans are prevented from seeing them clearly. And, the other part of the question, about the poem as a sort of sustained meditation…

Dianne Bilyak: And staying with the mystery…

Carl Phillips: Yes, I do think writing a poem is as much as possible trying not to become conscious of what one’s doing, because then the magic cracks open. When I finally get down to writing a first draft, that all has to happen in one day. I can’t come back a week later and work on a poem, because by then I know what a poem is, and where it’s heading. So I try to get as much down as quickly as possible, because once I start thinking, to me, it’s ruined.

Dianne Bilyak: In the poem “Recumbent” you have the line, "What mattered most, what defined you?" Can you try answering that for yourself and for where you are in your life today?

Carl Phillips: I think what’s mattered most…you mean in all of life?

Carl Phillips: I think what has mattered most is having found somebody to love and to feel loved by. And having found in that same person a strong and resistant will that is a match for my own. And when it comes to poetry, having somehow stumbled into a language that rescued me when I had no other language that spoke to who I am—language that's continued to help me navigate the bewilderment of being alive and human.

Carl Phillips is the author of fifteen books of poetry, most recently Pale Colors in a Tall Field (Farrar, Straus & Giroux, 2020) and Wild Is the Wind (FSG, 2018), which won the Los Angeles Times Book Prize. His next book, Then the War, and Selected Poems 2007-2020, is forthcoming from FSG in 2022. Other honors include the Aiken Taylor Award for Modern American Poetry, the Kingsley Tufts Award, a Lambda Literary Award, the PEN/USA Award for Poetry, the Jackson Poetry Prize. and fellowships from the Guggenheim Foundation, the Library of Congress, the American Academy of Arts and Letters, and the Academy of American Poets. Phillips has also written two prose books: The Art of Daring: Risk, Restlessness, Imagination (Graywolf, 2014) and Coin of the Realm: Essays on the Life and Art of Poetry (Graywolf, 2004); and he has translated the Philoctetes of Sophocles (Oxford University Press, 2004). He teaches at Washington University in St. Louis.

Dianne Bilyak is the author of the poetry collection, Against the Turning and the memoir, Nothing Special: The Mostly True, Sometimes Funny Tales of Two Sisters (Wesleyan University Press, 2021). Through the Institute of Sacred Music and Art at Yale Divinity School, she received a graduate degree in religion and literature. She has been interviewing poets since 2005 and hopes to edit them into a manuscript about poetry and spirituality. Two of her monologues have been performed at the United Solo Festival in Manhattan. She is currently working on a writing project related to her experiences as a campaign manager in small town politics set in her hometown of Stafford, CT. Find out more at her website.