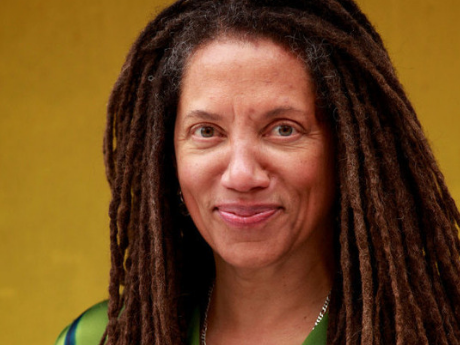 Dianne Bilyak: What was the role of organized religion in your childhood and in what ways did it encourage you to write?

Nikky Finney: God was all around but not everywhere. My parents were not Born Again people or heavy-handed Christians. We were United Methodists. We went to Church once a week, at the standard time, and on the traditional holy day of Sunday but not in between. We were not a family who stayed in church all day, as some families in our small town did. We were in at 11 a.m. and out by 1 or 1:30 p.m. Both my parents were raised in religious households but not heavily religious. The songs of church followed us home. I sang in the children's choir for several years. My mother sang in the choir. I didn't learn a great deal about the Bible when I was a girl. I didn't pay close attention. I wasn't forced to. I did learn a lot about the power of the human voice, especially as it entered that amazing invention called the microphone. I remember paying close attention to the acoustics of our one hundred year old sanctuary. How the human voice could carry from the pulpit into the congregation. What the human voice, with the right words, could make people do: jump and shout, raise hands high into the air, close eyes and weep. Even though a mostly shy and quiet girl, I remember being very interested in the power of the human voice, especially as I experienced it in Emmanuel Methodist Church, Sumter, S.C.

The ritual of going to church was very important. We have so many family pictures that were taken after church when the family was all dressed up. Church was a point of reference in our week. My family always sat together. I remember not long after discovering my love for poetry (age 13/14) that as soon as I got to church and took my seat, I would take out a pencil that I had brought with me and start scribbling in the margins. In the pew sometimes I was in a world of my own. I wrote down words and ideas that traveled through my head. I loved the feeling of writing in church. Sometimes my mother and father stopped me because they thought I wasn't listening, but usually they left me alone to wonder and imagine in the margins there. I think this was a very important first lesson in the girl-poet learning to concentrate. But I remember, around the age of 16, becoming very disillusioned about religion. I still loved the ritual of going to church but as I entered my teens, I became very suspect of the men who ran the church. The rules and the regulations didn't seem fair. The men ran it. The women worked to keep it going. The men preached. The women listened. During my teen years I became very concerned with what was fair in the world and what was not. I became very rebellious against the status quo and the church was a part of that deconstruction.

NF: Whenever I return home to South Carolina I usually go to church with my folks. But I do not attend church regularly these days. I have never lived in another place or town where I felt at home in another physical structure. I have stopped looking. I will not sit in a congregation that preaches hate for anybody. I won't sit in a congregation that speaks of some human beings as "Children of God" and others as human beings outside that circle. I won't sit in a congregation that is all of anything. Twice I have gotten up and walked out of church because of something hateful uttered by whoever was in charge. I was afraid each time. I was jubilant each time. I was proud each time. I miss the Sunday ritual of going to church deeply. I think I have resigned myself to looking for God outside of church. I have always believed in a power greater than man or woman. I don't get caught up in the naming of that power. It is enough that I know and feel that this is so. I am more spiritual than I am religious these days. I do not take what I know to be spiritual lightly. I simply choose not to give what I feel a box with one name. I have read and studied many different religions. There is a strand of almost every one in what I believe. I was not taught as a girl that a long walk through forest and woods could be called spiritual but that is what I have come to know as a woman. I was not taught that meeting a stranger on a bench, smiling, then sharing a short conversation, before going our own separate ways, was being in touch with the spiritual but that is what I have come to know. I believe that the soul of a human being requires quiet, contemplation, and walking. I believe as human beings we should spend some of our time here on earth seeking to communicate with one another and working to care about someone other than ourselves. I seek out quiet, communication, and reflection often. I used to think I could live some kind of a monastic life. That was the old shyness talking. I have climbed beyond those southern-girl walls. I don't believe that anymore. I need people to complete my days. I need laughter and interaction. Without that there would be no words to speak of—to write down.

DB: Kwame Dawes calls you a "griot" (poet as priest or storyteller) "to contain the voices of the community" and "become the soul of the people." Do you ever feel like a poetic missionary?

NF: No! A missionary is commonly thought of as a member of a religious community. I don't align poetry to any kind of religion. Also, a "missionary" is typically one who believes something that others do not and is trying to convert. Heaven forbid that poetry ever be seen as something that should convert, one heart or one head, to some other heart or head. Does poetry have the power to convert? Of course. Indeed. But is that the intention? I think not. I hope not. I'm very uncomfortable around anyone possessing what is defined as "missionary zeal." I am very comfortable in a world full of people who believe different things. Do I have to believe what you believe in order to shake your hand or take you in my arms or engage in great conversation? I feel comfortable living in a world, where so many great and lovely people believe so many great and lovely things. Why, so often, do human beings insist on attacking and bombarding people who don't believe what they believe, with what they believe? There's enough good and truth and faith to go around for everybody. This world has a long and violent history of one group of human beings believing they have the answer for all human beings. I believe all people have answers and poetry is a medium that lifts that truth into the air and makes us all circle around it with our hands outstretched.

DB: Dawes also says that you are a "dreadlocked woman who understands that there is something deeper than a story." Can you respond on that?

NF: When I first started wearing my hair in dreadlocks a man approached me on the street. He was a stranger. His voice told me he was African. He took my right hand up into both of his. I allowed this intimate act from a stranger. I didn't resist. He said, "When you wear your hair like that you are able to speak directly with your ancestors." I stared at him. He dropped my hand and walked away. That was 25 years ago. I believed him then. I believe him now. His words have proven to be true words.

DB: What is deeper than a story?

DB: The word "sacred" appears in many of your poems and they are, in the sense that by lyrically recounting these stories you bow before your history and your ancestors. Though the past is both difficult and holy, how are poems like a temple created for the reader to enter?

NF: You are right about the sacred, but its not the formal sacred, it's the informal sacred. Sacred is sacred, just the same. I am not trying to make the poems into temples. I am hoping they are more tree house than temple. I stopped attending the formal church that I had attended most of my life; because of the hypocrisy I felt growing there. There was the illusion that all were welcome but that wasn't true. I don't want readers of poetry or lovers of words and music to think they have to enter a temple to hear what I'm feeling and thinking. I do want them to climb a little, and look out at the horizon a little, and definitely work a little. I have truly tried to make a divine thing. I do want to communicate something sacred. But one does not have to kneel to it. One does not have to bow to enter. One does not have to empty ones pockets to stay. One does not have to accept flatbread on the tongue or accept one belief over another in order to be welcomed. I am not looking to "save" anyone or to be "saved." Merely, climb up into what the heart has to say. Close your eyes and listen to breath and alphabet speak. Take a seat wherever you can find. Wear whatever you have. Look out and look in. Question what you thought you knew. Don't just fall for just any pretty line. Don't climb down until you listen and hear your human name called. Only then may you leave but only after you believe that you have full right and responsibility to the tree of life.


* * *
Nikky Finney is professor of creative writing at the University of Kentucky and the author of four volumes of poetry,Head Off & Split, The World Is Round (winner of the 2004 Benjamin Franklin Award for Poetry),Rice (winner of a PEN America Open Book Award in 1995), and On Wings Made of Gauze (1985). Recipient of the Kentucky Foundation for Women Artists Fellowship Award, Finney is also the author of Heartwood, a collection of stories, and edited The Ringing Ear: Black Poets Lean South.

Dianne Bilyak has been nominated for a Pushcart Prize and her first book of poems, Against the Turning, will be released in September 2011. Through the Institute of Sacred Music at Yale Divinity School, she received a graduate degree in religion and literature. She has been interviewing poets for several years and editing the transcripts for inclusion in a manuscript called Poetic Faith. Please visit her website.